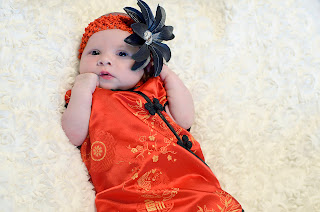 Here she is!  I never even knew about getting these kind of newborn pictures - until it was too late to do it with Tristan, so I was uber excited to have Cambria molded and posed to get shots like these.  There will be many more to come, but this is what the fabulous photographer has edited so far. 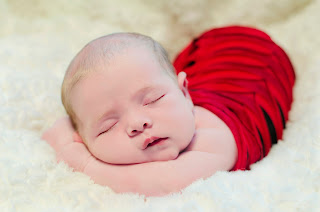 She was awake for a little while, then once her tummy was finally topped off, she slept through hours of this, and then a few more hours afterward.  We are certainly enjoying her around here! 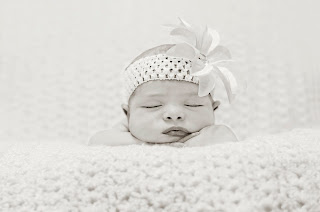 In other news, Tristan had another modeling gig today.  I had to take all four children - ugh of ughs, but we survived, and it's that much more money to fatten his college account.  Kyler had his first modeling session while I was still in the hospital.  My mom went with him and found it all to be very interesting.  Speaking of my mom, we were sure sad to see her go, and we all wished we had planned for her to be here another week, but alas changing the return flight would have cost as much as the original round-trip ticket.  People here in the church have been very generous with meals, which we sure appreciate.  Dean is back to work as well after his ten days of baby leave (which included weekends).
We will miss such perks when he's a civilian again.  Yes, he finally told his command that he intends to be finished with the army after we leave Korea next June.  He had just been accepted to do a residency in internal medicine, compliments of the army, but ultimately decided that's not what he wants to do.   Now we have a year to figure out what in the world we'll do, and where in the U.S. we'll do it.
Posted by Living Lavallee at 9:06 PM

I LOVE her little dress and the flower. So cute! She is absolutely adorable! Aren't girls fun!?
-Karalee

Ahhhh, those are beautiful!! what a pretty lady!!

What an angel! She is so pretty and I also love that dress with the flower! I hope she lets you sleep and I hope that your boys are helpful to you...at least sometimes:) Can't wait to see more pictures:)
Good luck in search of your future. I never like treading in the unknown.

She is so pretty!! Those lips!! The pics just make me want my little girl here all the sooner. I can't wait to see more pictures! How funny to see uncle louis and aunt louise there in Korea! I bet it was nice to see some familiar faces and have your mom there.

SOOOO CUTE!!! I am kinda sad that you are all getting out. There will be way less of a chance that we will cross paths with you all out.

Beautiful! You know, you're going to have to change the title of your blog now;)

She's so beautiful!! Congratulations!! I bet it's nice to have another girl in the house!