I bought a membership to John Rosemond's website a while back and decided to submit a question recently, which he answered.  My question was what to do about Hunter who has been sneaking downstairs at night to play on his game cube, and I mentioned his other behavior issues.  He will sometimes fall asleep at lunch or dinner because he is so sleepy, and sleep 6 or more hours in the day time.  Here is his answer:

A: the obvious solution is to remove the video game from the home. they have no place in a healthy family environment anyway. you need to put a permanent end to this problem so that you can concentrate on the more pressing behavior issues. by the way, video games, says the research, are associated with low motivation, misbehavior, aggressiveness, underachievement, and short attention span. you are describing an addict, and the research clearly says they are addictive. get the heroin out of the house! today! now! do what i say! john

We did it, only we decided to be kinda sneaky like ol' Hunter.  We showed him this answer and told him it would have to go.  He was a little weepy, but said he at least wanted to sell it since he and Kyler had purchased it with their own funds.  I explained that it really wasn't worth much of anything after their treatment of it, not to mention how old it is...  Being busy with a newborn and all the other normal craziness around here, it took me a couple of days to get to it, and to ultimately decide exactly what to do.  I got out a hammer and had Dean go at it, containing it all in a box.  I put the box back where the game cube had been and left it there for Hunter to find.

The next day he didn't say anything about it until later in the day, as he and Kyler marveled about it and accused me of being the culprit.  I denied it.  We actually had a spare unit, that I think I picked up for $7, and they got it out and hid it under the spare bed in Tristan's room.  I had them retrieve it and they begged me not to destroy it.  Once Dean was home Hunter really got excited, accusing us of doing it and carrying on, trying to choke back the tears.  We continued to deny it, just as he denies every misdeed of his life, even as we catch him with his hand in the proverbial cookie jar.  He admitted that he had come downstairs in the night to play and found it destroyed.  It warmed my soul to picture him slinking back to bed unsatisfied.  I had removed the cord from the TV as well, and locked the computer so he couldn't do either of those things during the night.

There hasn't been a word about it today.  I forgot to take a picture of the destroyed unit before it went out with the trash.  I've hidden the spare one; maybe it will make an appearance in a year or two.  He's password protected out of the Wii, so he can exercise or whatever when he's supervised, but that's it.  I hope the saga is over.
Posted by Living Lavallee at 5:13 PM 8 comments:

... that we would upgrade our video gaming system.  I let the boys buy an old school Nintendo Game Cube a couple of years ago (with their money).  Recently someone we know was selling a nearly-new Wii.  I mentioned it to Dean, and without hesitation he said "let's get it!"  He had been wanting to try the Wii Fit for exercise.  He has been using it, even doing yoga, which apparently he's been wanting to try  for a while.  If all the posture exercises convince him to hold his head high instead of slouching (one of my pet peeves!), then I'll be happy.  I won't let the boys use it without Dean around.  They've treated their Game Cube like a red-headed step child, so I'm not about to let them trash this.  Hunter wailed and then hid for hours when his friend came over the other day and I denied them of it.  He has stopped asking.

Now I know what it is like to take all four kids shopping.  Somehow I've managed to avoid it thus far.  I told the boys I'd get them something at Taco Bell if they would be exceptionally good.  I wore Cambria in a pouch, and had Hunter push Tristan in the umbrella stroller.  Kyler's been stealing at stores once again, we discovered recently, so he got to sit in the basket of the shopping cart that I pushed.  At one point Hunter managed to separate himself (and Tristan) from me, and ran right to the front to have me paged.  Oh, joy.  Kyler tipped the cart completely over while he was in it (I was looking at something); he jumped out before it hit the floor at least.  He spent the rest of the time whining about wanting to get his quarter from the van to buy a gumball.  Hunter pointed out a magazine in the checkout stand that had a headline about how to get rid of a fat belly, and thought I should buy it for myself.  I got Hunter a burrito at Taco Bell, since he was actually helpful, and Kyler got to eat leftovers for lunch at home.  We all got to listen to him carry on about it the whole way home, and I doubt that it cured him of any of his misbehaviors, but I felt a little vindication, and that's what matters.
Tristan woke from a nap with nasty goop coming out of one ear the other day.  His ear drum must have ruptured, and it turns out both ears are infected.  He never made a peep about it or showed any sign of illness.  The lady who uses him to model occasionally called late this afternoon to see if he was available to finish a shoot, since the other kid who was modeling was having a melt down.  Dean was able to come home from work and stay with the boys while I went with him and Cambria in a taxi.  Between Tristan and Kyler they've made about $1000 now (all going to college funds).
Hunter and Kyler have had four weeks of swim lessons now, and have four more to go.  They have loved playing in the water forever, but it wasn't what anyone would call swimming.  Now they are learning for real.  I never did learn to dive, just belly flop.

Yawn!
They were both very sleepy after church.  Kyler loves holding Cambria most of all.
We went to a Korean water park recently and were required to wear swim caps.  The black ones looked like doo rags, and the caps made it hard to spot the kids amongst all the Korean kids.  Normally it's easy with their hair that isn't black.  I was afraid of a repeat of our last trip to a water park two years ago when Tristan was one month old (like Cambria is now) and I got stuck holding him the whole time while the rest of our party had a grand time.  I made sure that didn't happen this time. She was a hit with the Koreans, of course.  Water parks and cameras don't much go together, so I didn't get any pictures.
Posted by Living Lavallee at 10:36 PM 4 comments: 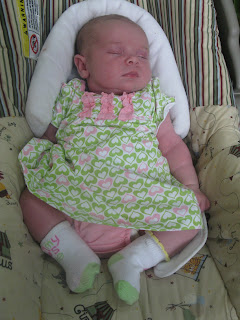 Here is our 4th child - it's still hard to believe that we have four now.  Same goes for the Koreans.  They can't believe it either, and count them all when we come around.  She is a doll, and has been sleeping 'round the clock lately, including through the night.  That sounds great, except that by morning those who feed her are overflowing... 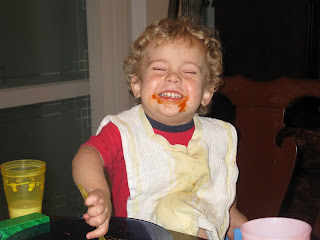 We started to celebrate this guy's golden birthday on July 2nd, and had his favorite for dinner - pizza.  Then we decided to wait and continue the rest of the (simple) festivities on Sunday the 3rd.  Spence and Rachel came over and had cheesecake with us, and with a little direction from Mommy, he blew out his own candle.  The toy Cars camera was the favorite of the presents - just ask Hunter and Kyler. 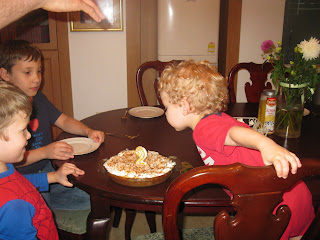 He is a fantastic big brother, always wanting to keep her pacifier handy, and shove his fingers in her ears to be sure they are OK, or test the seat belts to be sure that they are working - by unbuckling hers...  He was rocking her so vigorously the other day in her car seat at home that I thought the whole thing would launch. 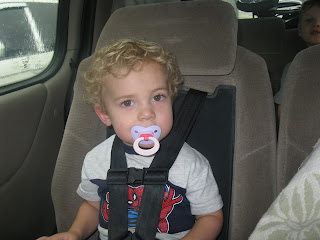 He did help put the chairs up after church yesterday. 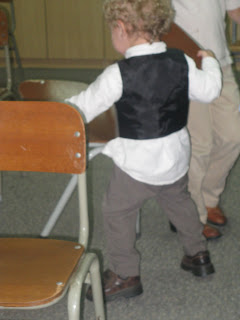 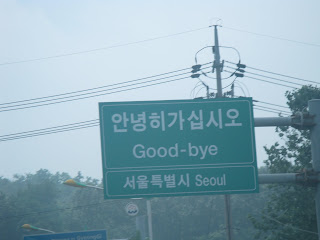 to Seoul for just a bit.  We went to Namhan Mountain and hiked around.  It was great exercise for the out-of-shape post-partum one, except that my shoes were killing my feet and I went barefoot the last downhill stretch.  Apparently these particular shoes really are too small, as my feet aren't swollen any more. 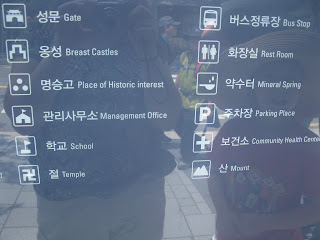 Here's part of the wall, which is essentially the fortress (one long wall).  The map above was handy. 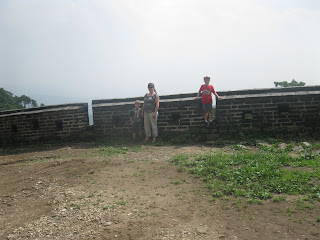 I've realized that once you've seen one Buddhist Temple, you've pretty much seen them all.  I like to look anyway. 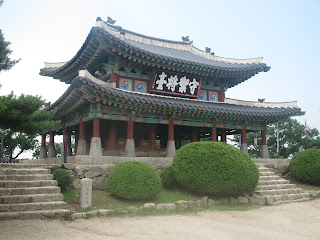 I really liked the giant orchids growing in the pots on the right.  At home, every time I sit down to nurse the baby I notice that my orchid looks dry, and remember that I haven't watered it in ages.  But since I'm sitting down nursing I can't do anything about it, and once I get up I forget.  I finally remembered today, and one leaf is pretty much a goner.  Poor orchid. 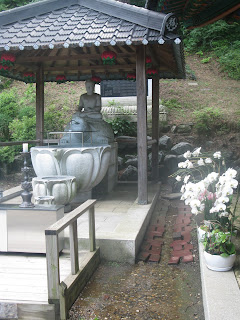 We have a similar picture of Proud Papa with baby Hunter way back when he was in vet school.  I think he was actually studying then, rather than playing games.  I don't miss those days. 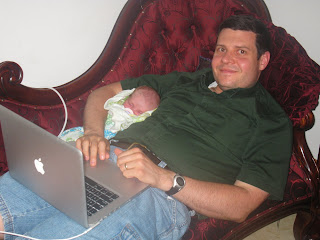 So that's what we did in Korea on July 4th.  We did go to the base to see the awesome fireworks show on July 2nd (Saturday).  We told the boys that the fireworks were for Tristan's birthday.  They were impressed.