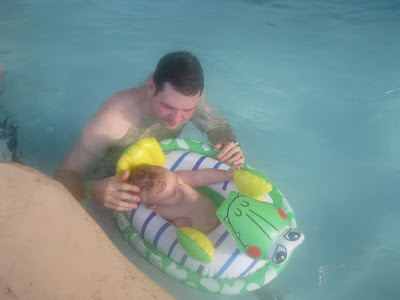 Several weeks ago, while Dean was still convalescing from his knee surgery, we decided to take a short family vacation down to Myrtle Beach, SC. It's only 2.5 hours from here, and a hotel with an indoor water park was recommended by friends, and in the winter season it was a bargain to go. We had a lovely time. The boys played their hearts out in the two water parks - one in each of the two buildings that make up the hotel. Even Tristan had a little fun. I couldn't get many good pictures because it was too steamy; the water was nice and warm.

We have never paid for TV our entire 10 years of marriage. I just can't bring myself to do it. So, it is always a huge treat for me to get to watch the History Channel, and the Discovery Channel, and the Learning Channel..., so I was content to stay in the room with Tristan and watch the two TVs, but did go with the boys a few times to play. 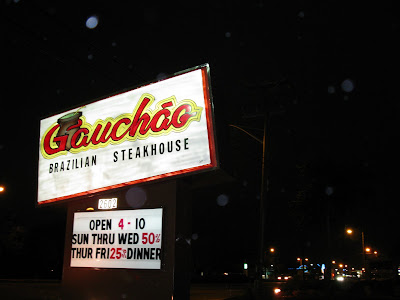 This restaurant was recommended to us as well, and it's always a treat to have Brazilian food. Of course they bring the meats by so fast, and I want to try them all, but feel like such a glutton. It was delicious, and Dean always loves to surprise the staff with his Portuguese. 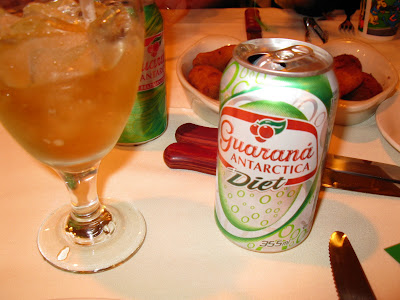 Here's a picture of the little man. He has been the most wonderful baby and we all love him so. He does this face when he's eating baby food. He has 8 razor-sharp teeth now, which is hazardous for Mother who is still nursing! He army crawls, and gets up on his knees to crawl, and ultimately gets around pretty well now. I'm slowly starting to baby proof... He is 7.5 months old. He says "la la la" and "ma ma ma" and "na na na". It melts my heart! 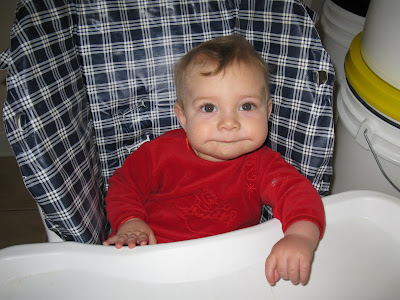 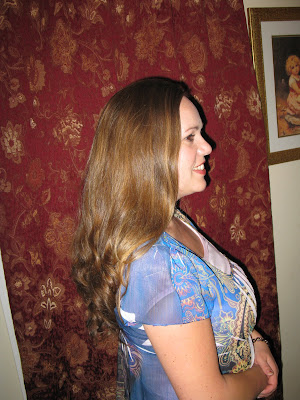 Here is my new 'do. I love having long hair. Those who knew me as a child might not recognize me for the last 10+ years, as my mom always gave me a boy-looking haircut. It's thick, and I remember getting "rats" in it at times, so off it went. After leaving the nest, I found that without perms, it would actually grow - imagine that! So, it's all been down as far as my waist, but alas, it is too heavy, so I've had lots of layers cut into it, while still keeping some length in the back. Every couple of years I get layers, then a couple of years later tire of them and cut them off... 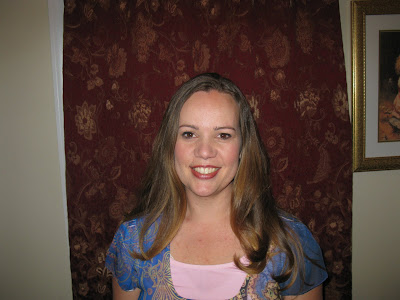 Snow! On the North Carolina coast! By morning we had seven inches. It typically snows here maybe once in 8 years or so, although we did get a slight dusting of snow once last year. Hunter was out playing in it before 7:00. We were woken by Kyler at 7:00, as he came in demanding snow attire. Dean and I both recall staying out in the snow playing until we could barely move our lips or fingers; these guys don't last nearly as long! Last night Dean and I racked our brains trying to think of where there might be enough of a slope to take the boys sledding, as we have a couple of disc sleds, but it's pretty flat here. Kyler tried the drainage ditch in the front yard, but it didn't much work. 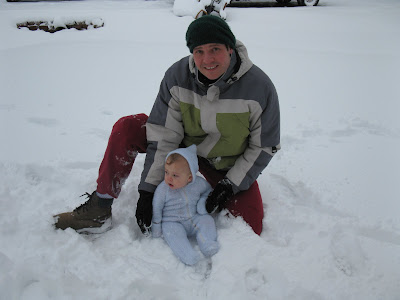 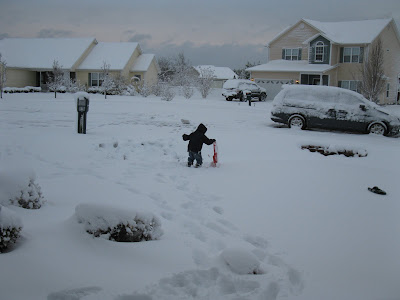 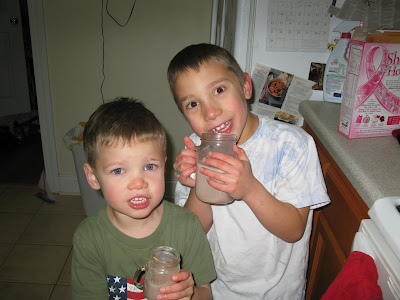 Oh, and we did find a van. We got just what we wanted, and Dean talked the dealer into just the right price. With a shockingly nice tax refund, and the money from selling Dean's car, we don't have any debt, either. Dave Ramsey would be pleased. It is a 2004 Chevy Venture with eight seats. We're still getting used to all the controls. We haven't had a Chevy yet. It's especially nice to be able to separate the boys so they don't fight like banshees where ever we go.
Posted by Living Lavallee at 11:30 PM 3 comments:

So some time ago I purchased some pro-life bumper stickers and put one on each of our cars. One was more inflammatory than the other: "It's easy to be pro choice when you're not the one being killed", and it had a picture of a baby with it. I put that on Dean's car, which was mildly concerning to him, because of his being in the army. You can't make waves in the military, so he was worried what people might think/say/do. The one that went on my car says "I have noticed everyone who is for abortion has been born"-Ronald Reagan. They both have gotten rave reviews from many people. So, we recently sold Dean's car in anticipation of buying a larger vehicle for our growing family. It sold in about a day on Craigslist, by the way. So, we had to scrape that one off when we listed it. So he's been taking my car to work this week. So, a new obnoxious person at work, who happens to be the EO person (equal opportunity) informed Dean that the bumper sticker on MY car (the Ronald Reagan one) was offensive to someone and that it "needed to be covered up" when he was at work. (He is the boss man at the facility here, by the way). He's only been back at work for about a week, now, and she informed him of this about his second day back - probably after she first noticed it.

He was awfully upset by this, which makes him want to not be in the military any more "I'm not allowed to have an opinion!" he says. I told him that was ridiculous, that someone should take such offense to the sticker, since it's really not an inflammatory one - except perhaps for people who've had abortions. The EO person is most likely the one who is offended by the sticker, since she's new and apparently hadn't seen the one on his car. Anyway, I was fuming and wasn't about to just let it go. I suggested that he let the offended one file a complaint and go from there. Although, his NCOIC (non-commissioned officer in charge) was nervous about it, as was the other captain. So, Dean finally brought it up to his commander, a Lt. Col in Virginia. She told him in no uncertain terms NOT to dare remove it. She is my kind of person! She says what she thinks and doesn't take crap from anyone. So, we feel empowered, and for the time being at least, the sticker remains. We are looking forward to putting a (pro life) Mother Theresa bumper sticker on our next vehicle, which we hope to get soon. I'd like to see someone get offended by Mother Theresa.
Posted by Living Lavallee at 12:30 PM 4 comments:

A Taste of Home 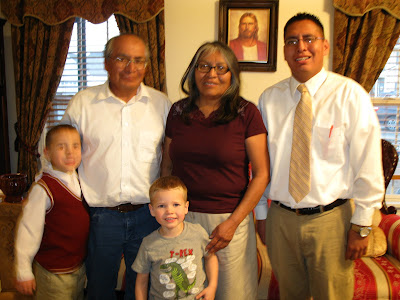 A few weeks ago at church we noticed a couple visiting their son, a young marine. They looked like they were from "back home", the southwest. So I chatted with them, and sure enough they are from Paige, AZ and were visiting Josh before he shipped off for a deployment. We invited them to have Sunday dinner with us (hoping we had something respectable on hand to serve). He is the president of an LDS branch there. They were wonderful company, and we shared many laughs. Navajos exude humor, and they've raised a bunch of sons and had some hair-raising stories to tell, including about Josh. As soon as he brought them in from the airport, he had all the fixings for his mom, Marilyn, to make Navajo Tacos for him and his buddies. I don't blame him! What I wouldn't give for an authentic Navajo Taco! President and Sister Bryant are well traveled and knowledgeable. Thomas is a contractor and keeps busy with that and his duties in the gospel. It was a treat to get to know them and feel a bit of kinship from the part of the country that we call home and miss. Hunter likes to jump around during picture taking, so he is blurred.
Posted by Living Lavallee at 11:14 AM No comments: