I never did get Kyler to tell me where the lock and key were for the TV. We did manage to clean up their room this past week, and I've been on them daily to put their things away instead of throwing them on the floor, and to celebrate we watched my favorite kid cartoon, The Hobbit, over the course of a couple of days.

So on about Wednesday I happened to be looking through a drawer in my sewing desk, and low and behold, there were the missing locks and key! Kyler rummages through that drawer daily, although I never would have thought to look there. I immediately replaced a lock in the TV plug, much to the chagrin of Kyler, who then ran to my desk to have a look for himself. I won't be leaving the extra lock/key around any more!
Posted by Living Lavallee at 12:10 PM No comments: 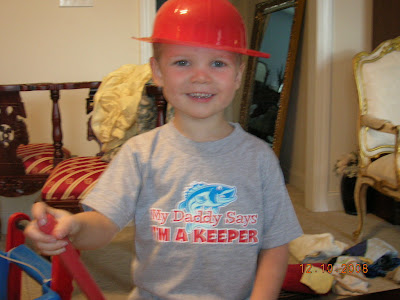 So I am well aware of the dangers of young kids watching tv. The experts say they should see none before age three, and it should be severely limited after that. The rule in our home for years has been that "as soon as your room is clean, you may watch tv". We've never paid for tv, so if we don't happen to pick up any with the old rabbit ears, then we have plenty of kid videos (courtesy of Grandmas), and an occasional one I have picked up here and there. I'm not in the habit of keeping their room clean, and they certainly are not either. They go to great lengths to avoid cleaning, or pretend to have cleaned (i.e. stuffing it all under the bed - it would have been just as easy to put their things away). So, they pretty much never qualify for tv watching. This has never stopped Kyler, though, from getting in some vegetative time.
So, I finally took the advice of a dear friend who shares my TV philosophy (although her entire home is always immaculate). To keep her kids honest, she purchased a small luggage lock, which fits perfectly in the holes of the plug for the tv. I finally invested in a two-pack on Thursday. I excitedly told the boys about it, however they were less enthused. I put one of the locks in the plug, and hid the key in my bedroom. I left the package, containing the other lock and key, in the kitchen and didn't think anything of it. I was stunned then when they were watching the tv by Saturday. I found the now-empty package, but no locks or keys. I tried to get Kyler to tell me where they were, but he wasn't about to. Apparently he got the other lock, with the accompanying key, and the keys must be interchangeable with either lock. Hmmm.
And, he's finally started scaling the fence in the back yard to go into the neighbor's yard to play on their nice swing set. It's one of those wooden ones, with nice tall slides and all that fun stuff - too much of a temptation. I caught him hopping back over the fence, and as I scolded him, he explained that he had to do it, because the gate was locked.
Yesterday was his first day as a Sunbeam at church. He ran from the chapel into the nursery, so I had to pull him out of there and take him to primary. I'm told he did well, but at one point they were taking a trip to the drinking fountain and the potty. I saw him in the hall, tackling another boy to the floor.
He looks so innocent! 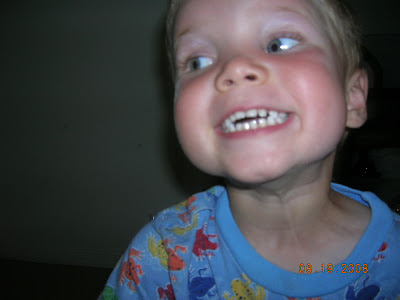