I have been detesting our laundry hamper situation for some time now, and finally found a solution. I bought this sorter a few years ago, and it has been a piece of crap for probably about 2/3 of that time. So I recently found a lovely piece of "furniture" that is a laundry sorter as well, at a price I could not resist, from the homedecoratorsoutlet.com. And, now, we have before and after pictures. It did take a few hours to assemble the new one, but it is well worth it. 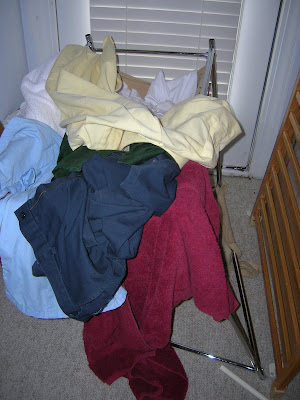 Note that the hamper isn't much standing up straight, and we finally got to the point of just throwing the laundry in the general direction of the hamper. The "buckets" of the new hamper are not very big, which is the only draw back to it. I wanted the drawers (who couldn't use more drawers anyway - perfect for stain stick). A model without drawers would probably have more room for laundry. Oh, well! It will certainly do! 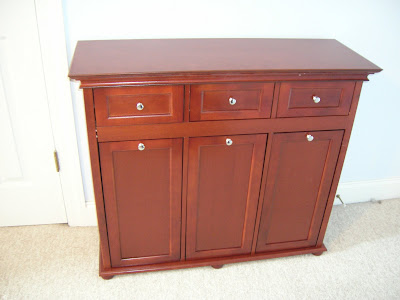 Posted by Living Lavallee at 9:16 AM 3 comments:

We recently went to an air show at Cherry Point (Marine Corps Air Station) in Havelock, NC, about an hour away. I had never been to one, and neither had the boys. It was a good opportunity to try out the new GPS. Sure enough it got us there, and it was nice to not have to print out maps. Dean was as excited as the boys to see a lot of marine air craft up close, along with some tactical vehicles on the ground. 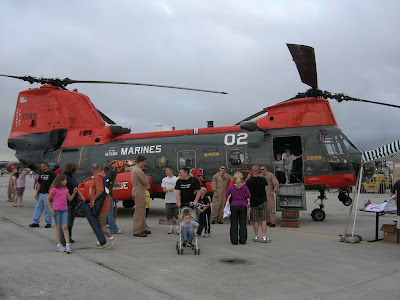 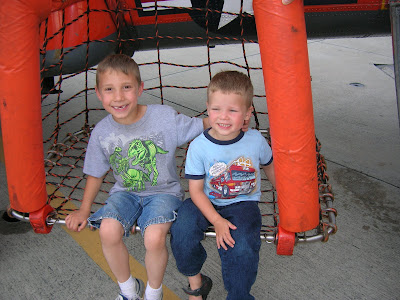 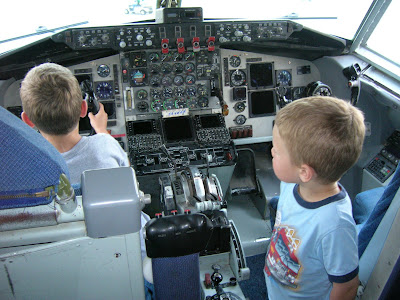 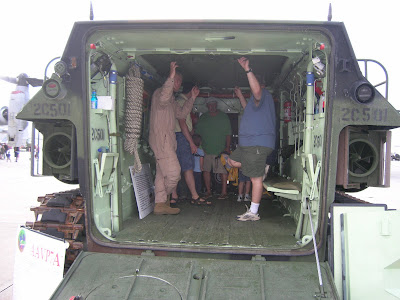 Dean is in the jean shorts and yellow shirt above. 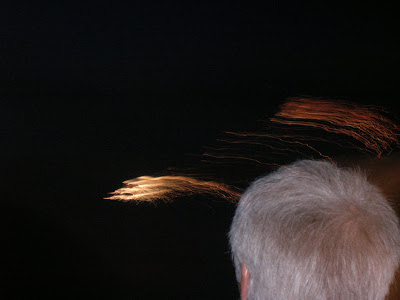 This was taken after dark of a twin prop plane that performed in the air show.
Posted by Living Lavallee at 5:43 AM 1 comment:

As promised, here are some recent pictures of my square foot gardens. 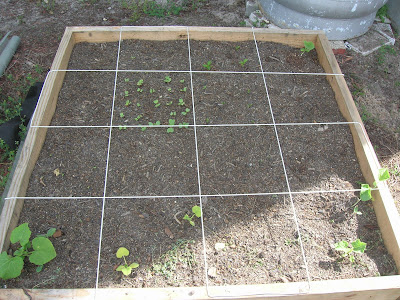 The one above has different plants in each square. It's lots of fun watching them come up, and it's great for surprises, since I didn't label anything. But it's all things I want, so I'm sure to be happy. I put flowers in a couple of the squares, so it's not just vegies. 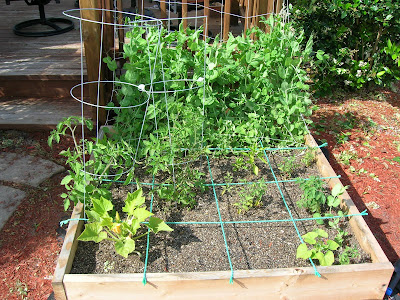 Those are peas growing up a trellis on the back. On the front left corner is the summer squash. I'll have to train it to grow away from the rest, as squash plants get very large. 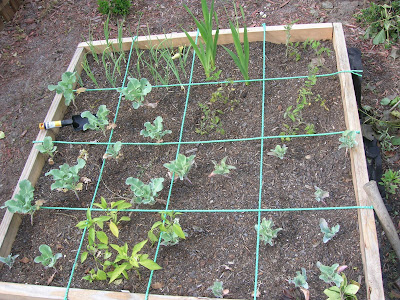 These are mostly cauliflower and broccoli, along with some onions (back left), gladiolus (back middle), hot peppers (front), and a couple of tomato plants. 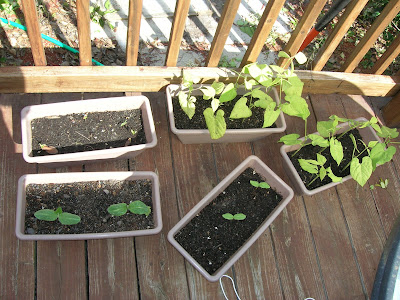 These are green beans (back right), cayenne peppers (back left - but starting this late I don't necessarily expect them to produce this year), and I forget (maybe pumpkin and cucumber) up front - I may try to trellis them up the deck rail as they get bigger.
Posted by Living Lavallee at 5:10 AM 1 comment: 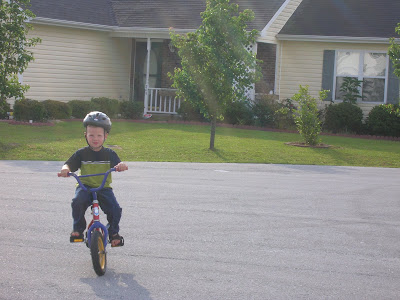 Some friends across the street recently upgraded Kyler's transportation to a two wheeler, and low and behold he can ride it like a champ! That's not bad for being three and a half... Add it to his growing list of "skills". 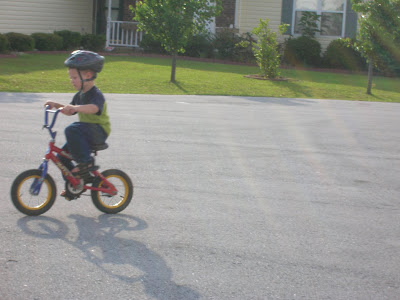 I was on the receiving end of much service recently, and I feel blessed.
Early in the week after playgroup, a friend offered to take Kyler home for a while so I could have a break and get some things done. What a relief! He got to have a ball playing with her son, and I was able to get some things done without a monkey on my back (ha ha). I am so grateful!
Dean and I are both more or less invalid at the moment, me because I'm five weeks from baby's due date, and Dean because he is having a real problem with his lower leg. He finally had the bone scan done, and saw a sports medicine doc - he has a stress fracture. So, in this time, our lawn has gone unmowed, and the weeds in the lawn have gotten out of control. It's looked atrocious. Truthfully, I could probably mow the lawn if I did it over two or three sessions, but that's probably not a good idea. So, after a nice walk yesterday with a dear friend, she insisted on mowing the lawn! I thought I could appease her if she just did the front, which would have vastly improved the looks of the place, but she wouldn't stop there and spent two hours doing the front and back!!! I am still dumbfounded, and eternally grateful. Dean was stunned when he came home, and felt awfully sheepish, but that's our circumstance at the moment. She, by the way, is busy with five children, and her husband is currently deployed, and I visit teach her, to boot! 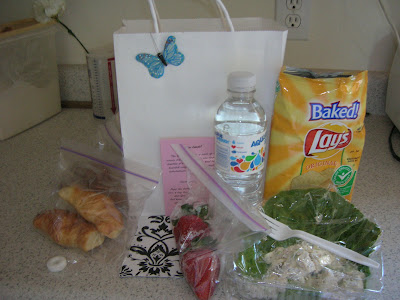 And at the end of the week, my sweet visiting teacher brought me a wonderful lunch! What a treat! Kyler and I both enjoyed it, and she thought of everything, right down to a fork, napkin and mint, and a lovely lunch bag!
'Tis blessed to give, but it is also nice to be on the receiving end!
Posted by Living Lavallee at 3:33 AM 1 comment:

I haven't updated in a while, because I couldn't think of anything profound to write about. Lots of little things, though - so maybe I'll give a smattering of our minutiae.
We've LOVED having Dean home for a couple of weeks now. We could get used to that! Of course, last night he remembered to mention that he was leaving tonight (Sunday) for a "military conference" at Ft Bragg, a couple of hours from here. He'll come back on Wednesday. He's there now, and still doesn't have any idea what it's all about. They'll find out tomorrow. Welcome to the army! He's been sick on and off this week with some bizarre fever/infection. We're wondering if it's not related to whatever unknown injury he's had in his ankle region since he was in Texas. He's scheduled for a bone scan at the end of the week.
He took the boys to the stake fathers and sons outing/campout on Friday night. He was still sick, but more or less masking the fever with ibuprofen. The boys had a blast, of course, jumping in the water, rolling in dirt, canoeing and playing with the other kids. Kyler came home so tired that after sleeping all the way home and a shower to clean up, he slept on the sofa all afternoon.
Hunter has been memorizing the Articles of Faith, which are basically a summation of our religious beliefs - http://scriptures.lds.org/en/a_of_f/1. He has completed numbers one, two and three so far. Kyler is even picking up on them as he hears us go over and over them. I was at the store the other day, and have been on the lookout for new dress pants for Hunter as he only has one pair for church. I actually found suits marked down (I assume after Easter) for $15, so I bought him a nice pinstriped one. It's a little big now, but he wore it today and looked handsome.
I'll take a picture soon, but Kyler, at 3 1/2, has mastered a two-wheeled bike! He's been riding one with training wheels for some time now, and last week the neighbors gave him a slightly bigger model, without training wheels, and low and behold he can ride it like a champ! He took a tumble or two initially, but is doing great now. He is speaking better all the time, as well. He still likes to cuddle and be our baby. Hopefully he won't feel too dethroned when a real baby comes next month!
I am doing well incubating baby. Some days are better than others, but overall I can't complain too much. My nose is noticeably bigger, and my face oozes oil, but some of my other usual pregnancy maladies haven't appeared yet. We still don't have a name yet, but are getting closer. I had a very nice Mothers Day. Dean made me a scrumptious breakfast of a bagel sandwich with eggs, ham and cheese. Hunter had made a dozen "gifts" for me at school, and even wrapped them all himself with newspaper at home. Dean gave me a GPS, a Garmin Nuvi. I am somewhat technology shy, but I'm getting tired of printing out google maps every time I need to go anywhere new, not to mention that I'm often getting lost. We tried it out going to church today, and it's great so far!
My square foot gardens are coming along nicely. (see http://www.squarefootgardening.com/ for more info - I even bought the book to learn how to do it right). I have three 4x4 boxes, all with lots of growing things in them. It is a bit of an investment initially, but I realized today, that what I've spent so far still wouldn't nearly add up to the cost of a small tiller (like a Mantis), so comparatively it's really not that much, and hopefully it will pay for itself with what it produces, and we should be here next summer for sure, and at least part of the summer after that... 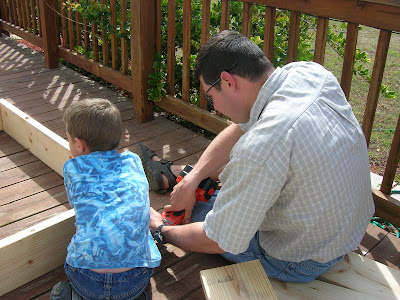 I bought six packs of several vegetables (tomatoes, peppers, broccoli and cauliflower). Only one of each of those is supposed to go in a single square foot (one tomato plant, one pepper plant, etc.), but then that would take up most of the three boxes, so I put more than one in a lot of the squares. Dean always chides me when I don't do things how they are supposed to be done, but we'll see what happens. If I didn't want to take up the entire gardens with them, I might as well have just thrown the extras out, which I couldn't bring myself to do. I also bought a package of small gladiolus bulbs a while back at the dollar store, and put them in one square foot. They have shot right up. I bought some onion sets as well, and put probably 16 in another square foot, and they have also come right up. I've planted beans, peas, squash, carrots, beets, radishes, pumpkins, dahlia seeds (perennials used as annuals), honey dew, watermelon, etc. The big plants and vines are supposed to grow vertically up a trellis, which the book details how to most easily build, so that is still on the to-do list. I had a more traditional garden last summer in Oregon, but kind of got depressed by August when we knew we would be leaving, and just left it there, with broccoli and peppers growing... I do as much as I can with the energy I have, then leave it alone. With the Square Foot Gardening, after the initial work of building the boxes and making the soil mix, it's pretty darn easy (no weeds, fertilizing, hoeing, digging, irrigating, etc). 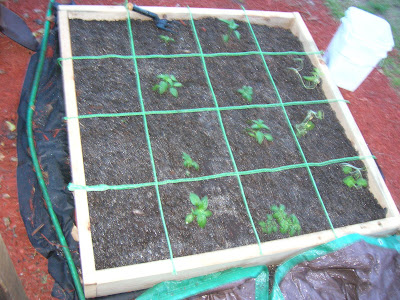 This picture is from a month or so ago. It looks much different now; I'll take more pictures soon.
Posted by Living Lavallee at 9:09 AM 2 comments: