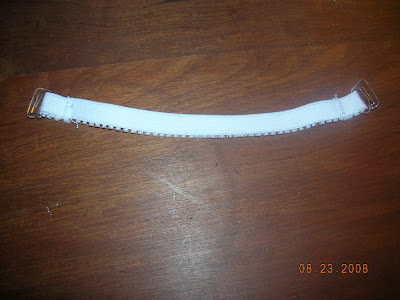 So I have done or found a couple of things lately that might be useful info for the ladies out there. One is that I finally took my wedding ring in to have the prongs checked out, and to have it resized. My ring finger was misshapen below the knuckle because the ring has been too small most of our 8-year marriage. It fit fine when we married... So I went up a whole size, and now I can get it off easily any time of the day, and may even be able to wear it if I manage to ever get pregnant again. I got a slight scolding from the jeweler, as only one of the four prongs was holding the diamond in. That's not bad for 8.5 years of wearing the ring, but it was definitely time to be done. I could see that the prongs didn't look quite right with my naked eye. They did a beautiful job and cleaned it up nicely. I've always loved the ring, and was happy that we picked it out together. It was a little spendy, though: $45 to resize and $25 for each of the four prongs. I guess it's like maintenance on the car - a necessary investment.
An item I've recently found is a bra strap holder. I'm sure I'm not the only woman frustrated with bra straps that don't stay up! I resolved about a year ago that I would never buy another bra that wasn't a racer-style, with the straps meeting in the middle of the back. Those are a lot harder to find, and tend to show at the neck. Well, no need for the boycot of regular bras since I found the Dritz bra strap holder (I think that's what it is called). For you sewers, Dritz might sound familiar, as it makes sewing notions. I saw one of these online, and looked at the local Joann Fabric and Crafts, and sure enough there it was on the wall amongst all the sewing notions. It cost a couple of dollars (I think I even used a Joann coupon), and saved my bras from the trashcan! I took me a few minutes to figure out how to put it on but once I got it, I haven't had to pull up a single strap! A victory for the Ladies!
Posted by Living Lavallee at 1:54 PM 2 comments: 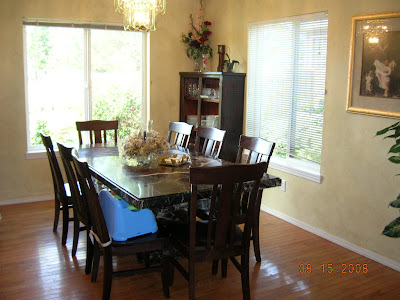 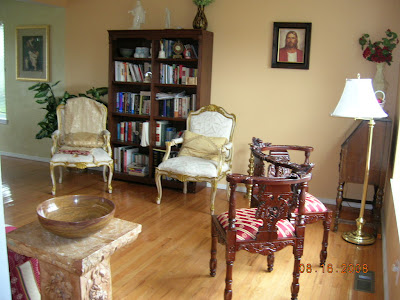 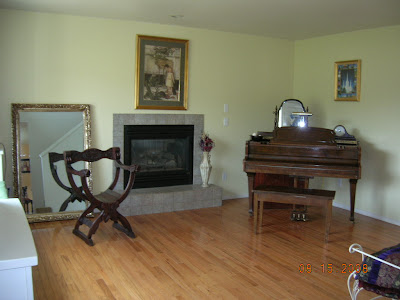 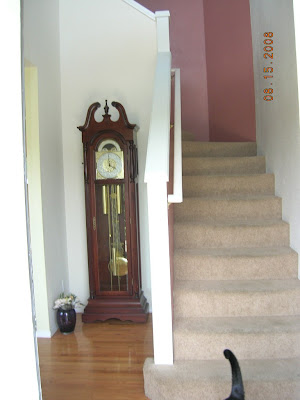 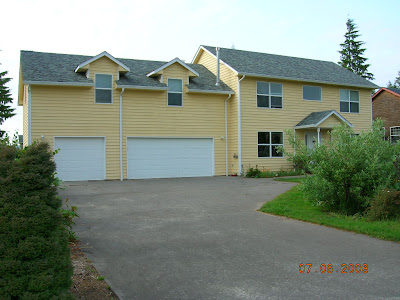 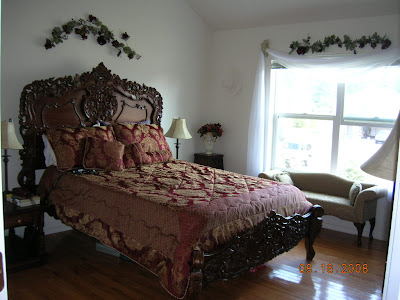 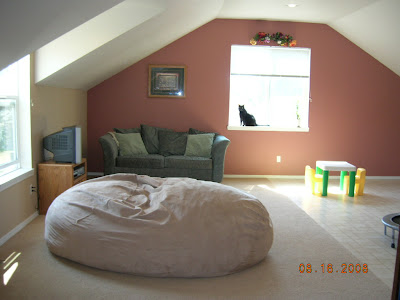 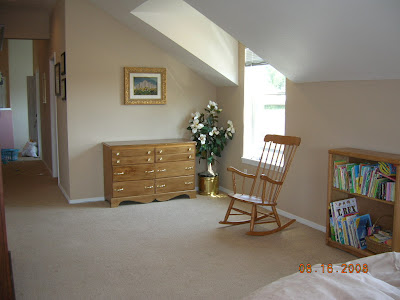 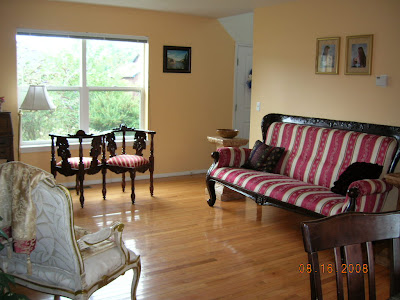 I finally got the house straightened up enough to take pictures inside, so that I can use them in the flyers out front, and someone on craigslist asked for interior pictures. So here, finally, is my house. 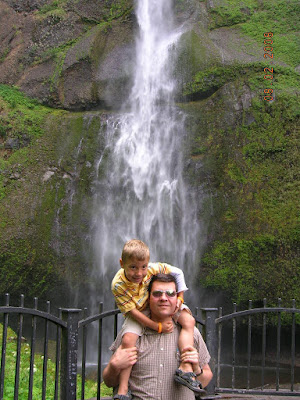 Dean and Hunter are in front of the Multnomah Falls. As you can see, Dean loves having Hunter gyrate on his shoulders. 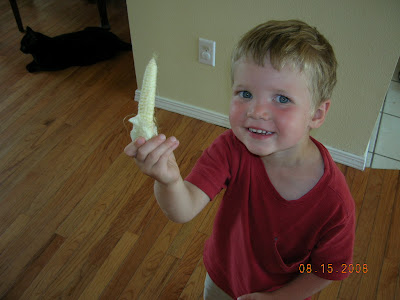 Here is the twin corn I was talking about, which Kyler is modeling. Hunter is modeling our potato harvest. My friend has always raised potatoes and told me that you cut them up (potatoes) and plant them, so I tried that, and what do you know... baby red potatoes. 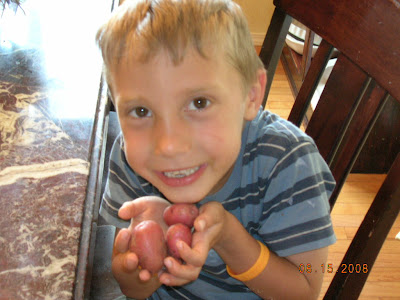 Posted by Living Lavallee at 1:23 PM No comments:

One of my very favorite foods, since childhood, is fresh sweet corn on the cob. So I always like to buy it in the summer. I picked out one particularly large ear. When I was shucking it at home, it turned out to be a twin, with a small, underdeveloped ear next to, but inside, part of the husks of the fully formed ear. I thought it was cool! I've seen twin carrots (look like pants).

Dean left yesterday for the 3,000 mile drive to Jacksonville, NC. We decided against sending Hunter with him. Not knowing where we'll be living, he'd probably end up changing schools anyway, which was my concern.

Meanwhile I'm still painting and getting the house in shape and hoping for a buyer.

I took Hunter in for a hearing test yesterday, and for the first time he has *normal* hearing! We already knew that as he could actually hear us, but they wanted to be sure the surgery was successful in that regard. He can hear the lyrics to music when we're driving in the car, and he overheard a conversation Dean and I were having, also in the car, that was not meant for him. And we had the PIC line taken out on Monday, so all is well in that department.
Posted by Living Lavallee at 7:48 AM No comments:

Hunter's surgery went well. His tonsils and adenoids were removed. The surgeon said the adenoids were huge, which would explain all the noise when he breathes - since he was a preemie in the hospital! He now breathes silently, with his mouth closed! Success! Since he was "deaf as a post" as usual, we had the surgeon also suck the fluid out of his ears and place tubes, again. The fluid apparently looked infected, as usual. Now, add hearing to breathing and we've got a new boy! It's been nine days, and his breath smells like rotting, decaying flesh, but that's apparently normal. I give him gum when he's close to me, or around other people. Since he has hemophilia he stayed an extra day in the hospital for observation and for me to learn how to infuse him at home with factor VIII. They put a PICC line in him while he was still under anesthesia, which is a catheter in his arm which extends into his chest, which is how I infuse him. He has a squealy whiney voice now, which is also normal and should last for another month or two. We are grateful for modern medicine, and are thrilled with the results so far.

In other news, Dean will be reporting to Camp Lejeune in North Carolina on August 18. We'll probably send Hunter with him so he can start school the following week. Meanwhile we are still waiting for a miracle to sell our house. Ugh... I'll probably stay here to work on that with Kyler.
We went to Portland on Friday to have dinner with some friends that were visiting from New Mexico, along with Dean's brother Dusty, who just moved to Portland from Virginia. We stayed Friday night with Dusty, then had fun all day. We picked up Dusty's fiance Patti at the airport, then went to the Multnomah Falls, a water fall east of Portland (I think that's what it's called). Kyler was a monster leading up to that, and fortunately fell asleep in the car while we travelled there, so I stayed in the car with him while everyone else got to see the falls close up. Then we went to OMSI, the Oregon Museum of Science and Industry. There were lots of hands-on fun things to do for the kiddos.

Today was Dean's birthday. I always like to ask him how it is to be so old - ha! I'm feeling old as my biological clock ticks away. Our sweet neighbor, who is in our ward, brought over a small cake for my birthday tomorrow. I'm always pathetic on Fast Sunday, so didn't much feel like making a cake and doing all that since we already had a lovely cake. So I didn't; I hope he wasn't too disappointed.
Posted by Living Lavallee at 2:55 PM 1 comment: