Stub the Toe then Throw the Sock

Poor little Tristan had a rough Friday morning.  He had been whining since Thursday, then suddenly whined louder and longer as he puttered around in the kitchen with me.  He somehow simultaneously stubbed his toe and raised a knot on his shin.  He actually let me put a bag of frozen vegies on it while he convalesced on the sofa, then fell asleep before 10am, for about an hour.  Noteworthy.  So once he awoke and still wouldn't walk on it, I took him to the ER, where they did a number of x-rays, but saw no breaks, which is great!  Have I mentioned that we still haven't ever had any broken bones?  I'm knocking on wood right now.  And we have only had stitches twice - remarkable!! considering all the nonsense around here.  After the ER we were off to the hemophilia clinic for a dose of factor.  They even remember Cambria's name there.  I can't remember most Korean names.  They also don't have any commentary about how unusual it is.  An African American soldier at Dean's work has said more than once "I thought only black people gave their kids weird names!"

Hunter has been begging for glasses for some time, and squints at things far away, like the clock.  We have gotten a notice or two from the school nurse as well, that his vision appears to be 20/60  (my dad's was more like 20/600, so I am not all that concerned).  The problem is that if we get glasses for the boy, he will lose them before we arrive home with said glasses.  He lost his new backpack before school started, and his new lunch bag soon after it started.  Someone stole his backpack at the school on the meet-your-teacher day, actually (he set it down on the playground).  I saw it listed for sale later on the flea market page here, and even sent a message to the seller, but got nothing.  It was full of his new school supplies as well.

Being the benevolent dictator that I am, however, I told him the other day that as soon as he can take care of his socks and shoes for 30 consecutive days, I will be happy to get him glasses, because then I'll know that he is responsible enough for them.  There.  Easy.  That puts the monkey on his back.  So far he has put his shoes on the shoe shelf next to the door once, and I still find his dirty socks strewn and stuffed all over the house.  It will likely be years before he gets glasses.  I suspect his vision has deteriorated from all the reading he does.  He's nearly through the entire Harry Potter series, which he started a month or so ago.  I know, I know.  Everyone tells me how wonderful it is that he reads so much.  So much so that he didn't get his classwork done much last quarter, and got straight Cs and Ds, as well as kicked out of the gifted program at school.  Yeah, that's what reading so much does for him.  Anyway, we've been watching the H.P. movies as a family, and are up to about number 6 now.  The movies would be easier to follow if we had read the books; Hunter knows exactly what is going on.  But I just can't bring myself to read them, much like the Twilight series. 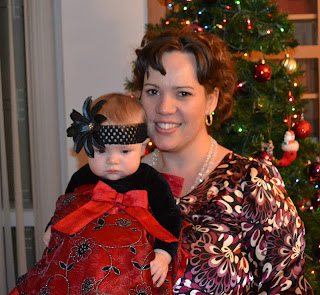 I am eons behind in blogging, but alas seem to have less time and energy by the day.  We spoke in church last week and I said to the whole congregation that one of my resolutions for the new year would be to go to bed earlier so I can get up and face the day earlier.  It has yet to happen this week.  Off I go... more to come!
Posted by Living Lavallee at 11:10 PM

Always great to be updated on the goings on of the Lavallee family.

Kaylee still only has two teeth and is almost 11 months old!