Are You Daring and Brave? 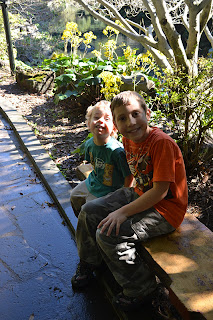 Today I took Hunter on some errands on the main army base here. I took the route through Itaewon, the tourist-y shopping area between here and there, and being a Saturday it was slow going.  There is a McDonalds at nearly the end of it, so I asked Hunter if he was daring and brave.  He laughed and said he was, so I instructed him to hop out, cross the street, and take 1,000 won (equivalent of a US Dollar, though the exchange rate is about 10% in our favor) to McDonalds and buy two cones, then find me outside.  He did it!  I had to drive a bit and do a u-turn to come back and find him.  Drive thrus are a rarity here, and I have been craving some soft serve ice cream.  I love the price, which is about 45 cents per cone.  Good job Hunter! 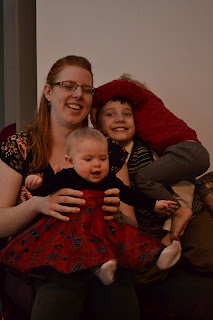 In other Hunter news, I've decided that he has ADHD.  He isn't one of those kids you see bouncing off the walls at school, but he has every one of these characteristics at least mildly.  ADHD would explain a lot.  I had him read through the info, and he agreed that perhaps he does have it.  I'm not sure that it is worth getting a medical diagnosis at this point.  I looked around online and found a product that I've ordered from Amazon.com, to see if it will help him.  I really don't like pharmaceuticals and all their ill effects, so will try this route for now.  Of course adequate sleep and good nutrition are the starting points.

Little Cambria has been more fussy and clingy of late.  She has no interest in being held by strangers, either, all of a sudden.  She's been screaming her head off when she wants Dean or me to hold her.  She is really insulted if we walk by without picking her up.  She knows all about the boys, and doesn't much care for them to hold her if she's cranky at all.  It is flattering to be the object of her desire, but I can't hold her every second.  Her sleep pattern has been changing a bit and maybe that's part of the problem.  I'm getting awfully weary of her wanting to nurse several times in the night, and have started giving her more food or a bottle of formula before bed.  Formula sure costs a lot!  My word! Now I know why I really nurse my babies, besides all the other reasons!  She is still an angel and we're getting her all figured out. We've also been putting her to bed in Tristan's room, and she only wakes once in the night to feed, so maybe she smells me when she's in our room, ha ha.

Posted by Living Lavallee at 9:07 PM

Figuring kids out and what they need is one of the hardest parts of being a mom....and getting up in the night too:( Glad you figured out how to get a soft serve, you deserve it!

being a full time SAH mom is definitely a challenging job but many little rewards! Good luck with ADHD--hope your remedy works.

ADHD? As a teacher, I have a strong opinion about the origin of ADHD. Summarily, almost no child truly has this disorder.