Kyler has been on a chicken and turkey kick lately, meaning he injects "chickens!" or "turkey!" into any and all conversation.  Yesterday at church, for instance, as we waited for the elevator and saw that it was going down without us he said "the chickens are going DOWN!"  Last week when I was trimming his hair he said "you cut off my CHICKENS!"  Speaking of his hair, it had been getting rather shaggy, hence the trim.  He liked slicking the top back with gel, and thought he was really stylin'.  He went to preschool like that twice, and the whole class was in an uproar over it.
Tristan speaks his own little language, and we are privy to some of it.  He is not a good eater - only wants to dine on treats.  He won't eat his meals at all (unless they are exceptionally tasty - like the whole bratwurst he ate yesterday), then spends the rest of the day running to the fridge for "balls", meaning apples, oranges, plums, etc., or cheese sticks, or climbing to get into cupboards looking for tasties.


We've been intending to potty train Trist-man before the baby comes, but now it's getting down to the wire.  He is 22 months.  I know what the naysayers think - regression, he's too young, yada yada.  I give him more credit than that, and just need to do it.  All kids were potty trained by age two in our grandparents generation.  Dean actually took Kyler to work today so I could maybe have the time without distraction, even though I told him I'm not ready to do it yet - can't find the doll at the moment, still need to read through the book again...

I asked Hunter to do Family Home Evening last week, and he did a great job.  He decided to teach us about Tithing, and found plenty of things to teach from in our books and other resources.  He's done it before as well.

I went to a "baby shower" on base Saturday, for any pregnant ladies.  There were lots of informative booths, such as with the embassy to know how to get Baby an American birth certificate and passport, and I signed us up for an infant CPR class through the Red Cross.  I came home with a big box of diapers, a "deluxe first aid kit", and other baby items.

Some wonderful ladies here threw a joint shower for me and another expectant mom at my favorite Thai restaurant in Itaewon recently.  I only asked for girlie accessories like headbands and such.  They ladies were all too generous and we are excited to use all the fun girlie things when Cambria decides to make her appearance.  We have settled on her first name, and may even have a middle name lined up.

Little Tristan came down with the croup (again) on Friday, so I took him to the ER on base where they gave him steroids and a breathing treatment.  I was hesitant to take him in because he has a couple of ugly bruises on his chest, and there could always be an idiot who can't comprehend hemophilia who might scream abuse. The doctor didn't say anything when he examined his chest.

Dean stayed home from church with him on Sunday, as I had a couple of duties in Primary.  He started to take him outside for a walk while the rest of us were gone, but Tristan took a tumble down the stairs exiting the building and cut his lip open, so Dean took him to the ER again.  They put one stitch in his lip, but it was gone (bitten out?) within several hours.  It's not bleeding much, thankfully.  Of course the doctor (who has seen him before for such injuries) refused to give the factor that Dean took with him. 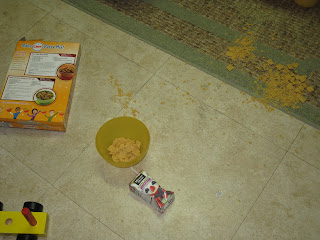 A hard day's pillaging makes for a great nap. 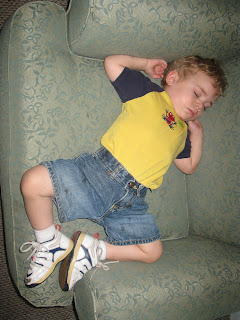 Posted by Living Lavallee at 9:52 PM

Good luck with potty training! I hope he takes to it well. Gavin is doing pretty good. I just have to remind him and then he will go. And Gavin is getting the same way with food as Tristan. He just likes "snacks" NOT "Dinner".
I am so excited for you to have your baby! And that your mom is going out to visit and stay with you. I bet you are so excited:)

With three little boys your home is a happening place! The count-down is definitely on for the arrival of your little girl! I like the name you've picked for her. Let the fun begin!