I had my first OB appointment yesterday.  We thought, based on dates, that I was 16 weeks along, but the OB did a simple ultrasound and said Baby was measuring more like 14 weeks.  We are thrilled that we are finally experiencing some fertility, now that we are 30 somethings.  I conceived shortly after weaning Tristan.  Fortunately, I didn't have to take any children along to the appointment.  This is the sort of thing they like to do in an exam room.  I'll update more when there is more to tell. 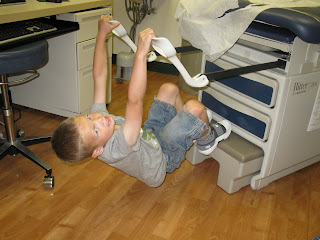 Dean is leaving for San Antonio after the first of the year for 10 weeks, plus travel and Albuquerque time.  I can't wait for that blessed experience.  He's hoping to bring back his beloved - Pancho.  I'm not sure where he's going to go in the apartment...  I sure have missed his messes and squawking and giant poop-crusted ugly cage. 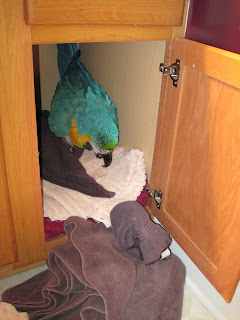 We had signed up to have some family pictures taken here in our village this morning, only to show up and find nothing.  I looked up the flake of a photographer on facebook and apparently she's moved back to Virginia.

Today the high was forecasted to be 28 degrees, so we thought we'd do something indoors for entertainment.  We visited the 63 Building for the first time.  It was pretty overrated, or at least when taking along our brood.  We lunched on Korean food, some fried sweet potato balls, and fancy ice cream, then paid nearly $50 to see an Imax movie of some paleontologists and a few dinosaur scenes in 3-D.  When it was over a Korean lady sitting in front of us scolded us.  We have no idea what she said, but she was certainly angry.  Perhaps she didn't care for Kyler's constant chattering (he couldn't get the English headset to work for him, operator error I'm sure), or perhaps she wasn't fond of getting kicked in the head by Tristan a couple of times.  I slept through about half of it.  There's a "Seaworld", an art gallery, a scenic view from the top, and more, but no military discount.  Dean and I decided there's not much point in going back unless it's without the children.  Each of the venues costs about as much as the Imax (which wasn't any better than watching the Discovery channel at home for an hour). 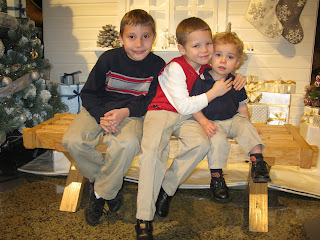 I did take advantage of some of the Christmas scenes they had, since the children were all "gussied up", as my grandmother would say. 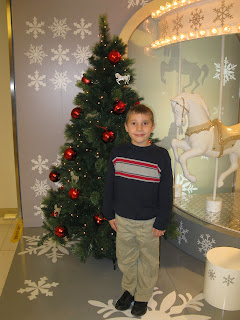 Hemophilia Hunter has had a black or multi-colored eye for a few weeks.  Kyler "snorkeled" him on the forehead just above his left eyebrow so, naturallly, Hunter proceeded to bite Kyler's forehead.  The lump lasted a week or so, then the pooled blood drained down to his eyelid and has been an array of colors from purple to green to yellow, etc. as it is slowly resorbed.  Kyler's bite mark was gone in no time. 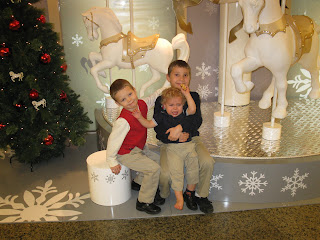 It was naptime for the Trist-man, so he was Mr. Grumpy for much of the outing.  He's been a snot factory of late and hasn't had an appetite since yesterday. 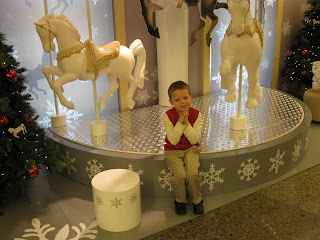 Kyler is angelic as always. 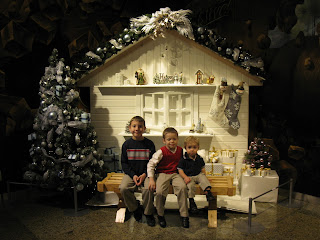 Their saving grace is that they are cute. 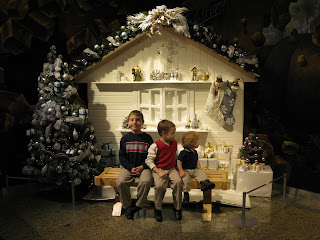 Monkey see, monkey do!
Posted by Living Lavallee at 4:35 PM

Aww, Congrats!! That's great news :) Maybe you can convince Dean that there isn't room enough for baby AND bird, lol!

Hey Girl I had just read your blog like 2 days ago then today Haylee told me the good news I asked how she knew she said the blog. So i had to come and check it out for myself congrats girl!!! We are moving to Utah this week so today was my last week at church. Crazy how things change!

That's exciting news! Hope you are feeling well/better if you had morning sickness. Your boys are very cute--I love the pics of them on the bench.

Congrats on your pregnancy! Very exciting. We tried to go the 63 bldg. once. The first question we asked was if they took credit cards, because we didn't have cash. They said they did. So we waited in line to pay for tickets, and when it was finally our turn, they wouldn't take our credit card, and they wouldn't say why. It was declined or anything, they just wouldn't take it.

So excited for you! Can't wait to here what it is going to be:) Hopefully you aren't feeling too sick:(