I called my mom one morning last week to say "hi" and see what was up.  She casually mentioned something about "...after Grandma died".  "What?!"  I said, as this was news to me.  My grandmothers were 96 and 93, so it could have been either one, and I hadn't heard anything about anyone being sick.  Apparently Grandma Merrill had been sick with pneumonia, and after a few days in the hospital and a few miserable days at home, she died on 12/22/10.  She and my grandpa lived two blocks down the road from us in little Ramah, and she was always full of compliments and hilarious anecdotes.  It is always sad to lose someone we love, but after living a long and full life, and knowing what we do about what is after this life, it is also peaceful to know that all is well now and she no longer has to be miserable.  Both my grandfathers died when I was a senior in high school.

I last saw her this past summer in Ramah while I was there for a couple of weeks.  One day I went to Gallup with Ronelle and her mom while there, and while we were in the grocery store, low and behold my grandma walked in by herself and grabbed a cart and was ready to shop!  I was stunned.  At home she wore oxygen, and Aunt Sharon is very protective of her and would always hold her by the arm when she walked.  She didn't wear oxygen out of the house, and didn't use a walker or anything.  I asked her if she needed help or anything, and she insisted that she didn't.  She said holding on to the cart was all she needed.  She was there to get fixin's for chili, as Uncle Eddie was going to be coming through Ramah and had requested some.  She rode the van with the senior citizens from Ramah.  She makes the best chili - and I finally got the recipe out of her, woo hoo!  (ground or diced pork or beef - she prefers pork, El Pato sauce in the yellow can, and green chile - who knew it was so easy?) 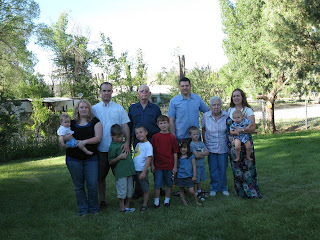 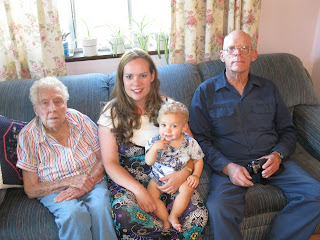 So, I decided that we only regret what we don't do, and I'd always feel a little bad if I didn't try to go to the funeral, so I got a "compassion" fare ticket to go to the funeral, alone.  Dean has much of the week off work for the holidays, and I found gracious people to watch the boys on the two days he would work.  I certainly didn't want to spend $5000 to bring the whole herd, and that would sure mess up their sleep schedules and be torturous for me (once again) on the plane.  So, Dean took me to the airport today and I tried to check in, but alas, there was no ticket, even though I had an email with the confirmation number and itinerary.  They put me on the phone with someone at United, who said my ticket had apparently been canceled today, but he couldn't see why, and the flight was completely full, so the next available flight was 24 hours later.  If I took that, I would miss the funeral, and have to turn around and come home so soon (since Dean is leaving for the US one week from today) that I decided there wasn't any point.  That was the best flight of all that I had looked up when I made the arrangements, and probably any other flights were full as well, so I found the subway and came home.


That, by the way, is no small feat for me.  I finally rode (and consequently figured out) the subway alone for the first time on Friday.  I feel so accomplished.  I was afraid that by the time I left here I still wouldn't be proficient in it.  It's easy enough to go with someone who knows what he or she is doing, but a far different thing to do myself.  The hard part was trying to get through the walk-through gate in our housing village.  It is not manned, so it has double doors and you slide your ID card through a slot to get through the first one, then put your finger on a scanner to get through the second one.  However, there is not enough time to get through the door and get your finger on the scanner on a good day, and certainly not when dragging a child or a piece of luggage, and I had a big suitcase.  So it had me exit the first door to try again (because I wasn't fast enough).  I thought I would outsmart the system and leave my suitcase in there.  But, it thought someone was still in there, so it wouldn't let either side open.  Ugh.  Some guys were trying to leave through the gate, but couldn't since it wouldn't open, so they went and got some MPs..... long story..... the MPs finally had to wait for someone from the main post to come, and I was starting to get frost bite, even with a hat, warm gloves, a scarf, and of course a coat.  So I walked around to the main gate and left my suitcase in there, admonishing the MPs not to blow it up (you know, an abandoned package).  They said they'd bring it to me when they got it out.  They did, hooray!  And I rewarded them with cookies.  Dean is happy for me to be here.
Posted by Living Lavallee at 8:06 PM

Oh, I'm sorry to hear about that. And that you couldn't get to the funeral! Crazy airlines :( Wow, I'm glad you made it home though - that sounds wild!

I am so sorry to hear about your Grandma. I am really sorry you can't make it to the funeral. That is terrible. Much love to you and your family.

Becky, so sorry to hear about your Grandma. I am glad that you made it through the subway and back home safe. You always have the most interesting experiences. Love ya!!

I'm sorry about your grandma, but glad she is out of misery. My mom just told me that you were pregnant. I must have missed the blog announcement. Congratulations!!

BECKY! What an adventure. Traveling alone is such a trial of growth. This was a good practice run for you. All the hassle without the trip.
You are a sweet granddaughter for putting forth so much effort and just wanting to be there. You will be blessed for your love.
Now any regrets won't be your fault. You did all you could.
Love hearing your stories. Love you lots!