I know most homemaker-type bloggers only post about how wonderful their perfect children are, and I'm happy for them, but I believe in the real deal, so you get the nitty gritty here, and everyone can feel much better about their darling angels after reading about ours.  It is also therapeutic for me to "get it out", and it will help me remember "what it's like" to have young children at home.

Hunter Pants (as he is affectionately known around here) has become disorganized and unmotivated to the point of really being a problem.  I got an email last week from the bus system reminding me that riding the bus is a privilege and his privilege is in question because his bus pass has been lost (he had supposedly found it by the time I got the email, but hadn't been showing it when he gets on the bus).  Today I got an email from his teacher wondering where some paperwork was  that she had sent home for him to be tested for the gifted program.  We had promptly filled it out and instructed him to put it in his backpack, which he obviously hadn't done since it never made it back to his teacher.  I looked around and found it in the coat closet.  He has been getting in trouble with his teacher for not getting his homework signed off at home.

When he "cleans" his bedroom, he merely stuffs his clothes/toys/books/etc. into nooks and crannies, or kicks them into Kyler's room, or strings them up and down the hall, or maybe tosses them into Tristan's crib, which is in his room, or throws them on the other side of his bed...  He walks in the door every day after school and kicks his shoes off where ever he happens to be standing when he decides to take them off.  He shoves his socks between couch cushions, in cupboards, under rugs, anywhere out of immediate sight.  He tries to wear the same clothes to school every day because he "can't find" anything else (clean, folded laundry that I give him has the same fate as listed above).  It is my opinion that children (not toddlers, obviously) should keep their own rooms clean.  How else are they going to learn good habits in life?  It nauseates me to hear stories of missionaries living in abject filth, or girls going off to college not knowing how to do anything domestic (cook, clean, nothing).

So, due in part to my own life-long bad habits, and due mostly to the children's penchant for making messes where ever they go, then walking away, our house is generally a mess.  I hate it.  I also believe, again, that the children should be responsible for cleaning up after themselves around the house, but of course that is like pulling teeth.  Dean occasionally will make a remark, but mostly understands the overwhelming nature of the situation.  If I only had to clean up after the two of us...  And no, I don't believe Dean should have to do much of anything around the house (beyond the obvious, especially since we don't have home repairs or yard work these days), though he does help out.  He slaves at work all day every day, and doesn't ask me to come in and file papers or whatever; the home front is my specialty and domain.  I've been seriously considering hiring a housekeeper, which is the trend here, to come in once a week.  I may do it yet, but primarily believe that we need to develop good habits and keep up with the work ourselves.  I feel the money could be better used in a mission or college or retirement or house fund, or for date nights.  We'll see.

Yesterday during church, Hunter's breath was so bad (he claimed he had brushed his teeth twice, but that has been an issue forever as well) that I gave him half a stick of gum.  When the sacrament was coming around, he wanted the gum wrapper to put the gum back in.  The new half was still in the paper.  I told him to tuck the gum up in his cheek.  Instead, I watched him fling it on the floor when he thought I wasn't looking.  I just didn't do that sort of thing when I was a kid.  It is beyond me that at eight years old he still acts like he doesn't have a clue in life and really couldn't care less.  During church, he can't seem to stop yakking, and often stands up for no reason, or will yawn, stretch and sigh, or fight with Kyler, or otherwise behave boorishly.  He went up to the stand to bear his testimony and had to wait his turn.  He proceeded to bounce around from chair to chair, and to lift himself up on the chairs and grin at us.  You get the idea.  Dean and I are losing our marbles over this kid.  It's funny, because he gets such accolades where ever he goes.  He was one of only two children to bear his testimony yesterday, and the only one to do it without any help.  So of course people are impressed by him (especially his grandmothers, who think he walks on water), which is fine.  But living with the boy is certainly trying on my psyche.  He's been wearing tennis shoes to church because he can't find both of his dress shoes at the same time.

I have had the rule for years that TV and electronic games of any kind are a privilege to be enjoyed by those with good behavior and clean bedrooms/bathrooms.  Alas, I usually don't have the will to trudge upstairs and check his or Kyler's quarters, so I foolishly take their word for it when they tell me all is clean, and I let them sit in front of an evil flickering machine.  Then when I finally do make it upstairs, their rooms are as usual, or all I have to do is open a closet to have an avalanche of crap come tumbling down.  We've taken away privileges and toys and evil flickering machines, yada yada, but we don't seem to be getting anywhere.  He tunes us out more and more when we ask him to do things (like his chores) or simple things around the house (like "put these important papers in your backpack and give them to your teacher", or "put your shoes on the shelf" on a daily basis). 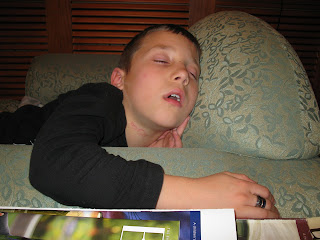 So, I looked up John Rosemond's newspaper column here to see what he has had to say lately.  I found my answer.  Hunter isn't "nasty" to us generally, although in the last month or so he has said some particularly obnoxious things to Dean ("I hate your guts" and something along the lines of "I wish you were dead"), which is odd because the boys all worship the ground Dean walks on, and of course these statements were particularly offensive to Dean.  I believe those two occasions were after Dean denied him playing games on his iPhone.  I had Dean read the piece, and he was on board, so at dinner we explained to Hunter that we had discussed his issues with "the Doctor", who was very concerned that Hunter was clearly not getting enough sleep...  So, when he shapes up and the monkey is off our backs, we'll know he is caught up on his sleep, and can resume a normal bedtime.  All privileges are suspended in the mean time as well.  Like J.R. says, we didn't get to this point overnight, so it may take months, but something has got to give.  He doesn't poop his pants, fortunately, but he does have a terrible habit now years in the making of eating his snot, which is abominable.  Nothing has worked to nix that, so we're hoping this will be cured as well.  It is on his list of necessary improvements.

In all reality, he probably is sleep deprived.  We have an 8:00 bed time, but by the time they torment us (demand food because they are suddenly "starving"), fool around, bounce on the bed, then Hunter reads in bed, he's often not asleep until after 9:00.  He frequently falls asleep when we drive around, and occasionally around the house.  For now, we will employ the 6:30 bed time, though I let him have the lights on until 7.  Here's hoping for improvement!
Posted by Living Lavallee at 2:37 PM

Most people like to put "their best foot forward" so don't rat on the abominable behavior of their kids but could write a book about it. Your post brought back many memories of some of my kids--though I won't mention names. . .Good luck with the doctor's advice, hope it helps!

I'm pretty sure it was all Kandra that my mom is talking about. Sorry about your kiddy troubles. I have some of my own. It is about the most frustrating thing in the world. Good luck and update on how your new program is working.

I look forward to the later years of childhood!

Becky I enjoyed reading your storying, having 3 boys myself know how you feel and am glad that I am not the only one that feels that way about the house and her 3 little pigs.

Ugh, "behavior issues" are the worst! It is good to know I'm not alone though... Sade has started things like "you love Kylee more than me" etc, and practically had me in tears with her attitude the other day... Good luck with your new game plan, I may have to use the 6:30 bedtime idea myself!!

I love your stories! Being a mom of an ADHD kid, I have a soft spot for rambunctious can-you-believe-this kid stories and the like.

Kids do nasty things. I have similar parenting ways it seems. I've been known to ask a child if he/she has been eating poop because their breath is so bad or ordering them to shower because their armpits stink. Cleaning up after themselves and brushing their teeth are never going to be habits they will choose to do, at least not at that age. You pretty much have to force them, and I guess that's what you've decided. You will do what they have to at the least and not do anything they can get away with. They definitely try my patience sometimes.