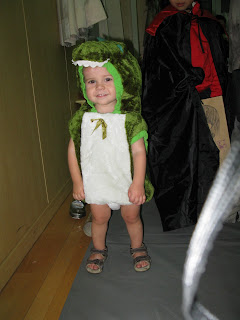 Last night was our Branch Fall Activity (at church).  Other than taking an hour to get there (traffic on Saturday nights is horrendous here), it was loads of fun.  Oh, and somebody (not me) managed to dump an entire sweet potato casserole on the floor of the parking garage, so we contributed no food to the dinner.  I was blamed for the poor choice of box that the casserole was in, however, which is supposedly why the casserole was flung from the box. 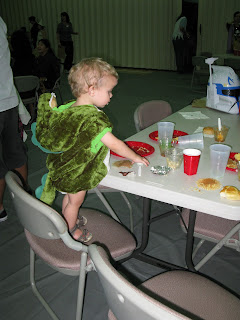 Tristan is an easy-going guy and had a good time wandering around, playing with other little ones, snatching cupcakes from the cake walk table (which was at his height), and foraging from others' plates.  His diaper exploded during the long car ride there, so he had nothing on but the dinosaur costume and a diaper. 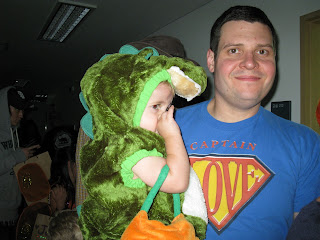 Dean went again as Captain Love.  I asked him to quickly find a costume online for me as we were getting ready to go (actually as I was sewing up some treat bags for the boys, one of which Hunter the Vampire is wearing in this picture.  So, I went as a "leaf blower", with a leaf dangling from a baseball cap that I could blow on. 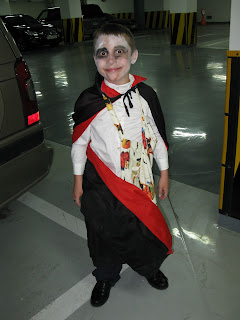 Hunter wanted to be something "scary".  I couldn't coax Kyler into a picture, so maybe on Halloween we'll try again. 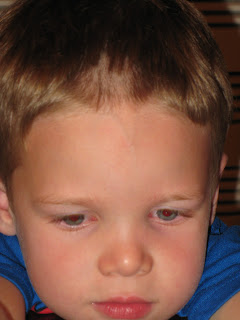 Kyler did, however, attempt to fix whatever he thought was wrong with his hair this afternoon.  I am still pondering whether it will look worse buzzed, or left as is.  Hunter did the very same thing in the same place when he was four (Kyler is five).  I thought we ought to be past that stage.  Kyler has been obsessed with his hair lately, wanting to water and comb it every day, and fretting about roosters.  I think it looks better left as is (wash and air dry, smooth down by hand while wet) than combed smooth.  He worries about fashion, shoes, weaponry, and so much more.
Posted by Living Lavallee at 9:38 PM

How did Kyler acquire this acute sense of self?