It's setting in that the boys and I will soon be on our way to our new home - one week and counting.

Dean is loving Seoul so far.  He likes most that there are virtually no freaks.  No weirdos on the subway, no hippie freaks, no panhandlers, no pierced and tattooed nutburgers that the kids invariably ask loud questions about.  People are hard working and at least look conservative.  So far he has seen one rocker guy with long hair, and one bum near the university, and that's about it.  We sure can't say that for America!  I've been pondering why there are so many oddballs here.  Is it the welfare state?  Maybe they institutionalize the mentally unwell in Korea?  I don't know.

He really likes the food so far, though is hesitant to try the live baby octopus and the silk worm larvae.  If he is very far from the base, they don't tend to speak English in the restaurants, so they will usually bring him a bowl of udon noodles or some other soup, which he has so far enjoyed.  It is monsoon season, and the other day he was unable to get a taxi on the base (our vehicle is not there yet) so he ended up walking a bit in a downpour.  Soldiers are not allowed to use umbrellas when in uniform, and he doesn't have any uniform rain gear, so he was just getting soaked.  A woman stopped and gave him a ride.  He thought she looked familiar and then realized that she is in the ward there (our church).  I'm so grateful that he is being watched out for by good people.  She didn't recognize him, so I don't know if the Spirit led her to pick him up, or if she's just super nice like that.  An empty-nest couple has been taking him to church, and fed him dinner on Sunday, as well as took him to watch fireworks.  That means so much to me. 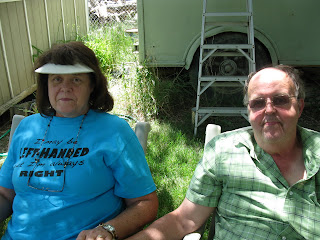 Hunter and Kyler are in Albuquerque with Grandma Dee and Grandpa David for the week, and my parents 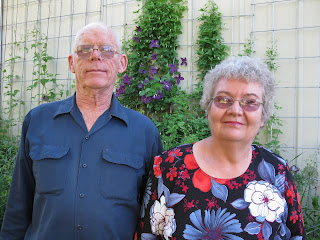 up and decided to take a little trip on their own, so Baby Pants and I are holding down the fort here.  Everyone, of course, has been enthralled with him.  He is an absolute doll with his sweet demeanor and blond curls.

He turned one on July 2, so we threw a little first birthday party on Saturday in the back yard. 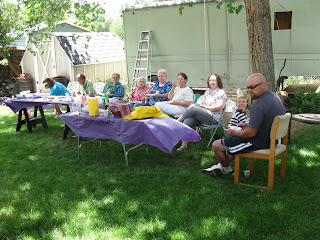 We served lunch and had a lovely cake done by 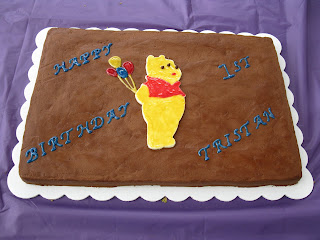 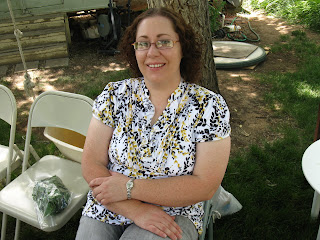 Tristan had no idea, of course, that we were celebrating him, but he had a good time. 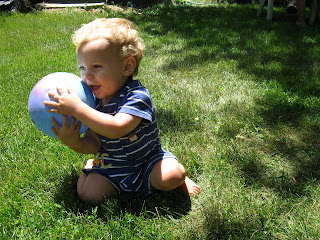 The boys provided entertainment for the party. 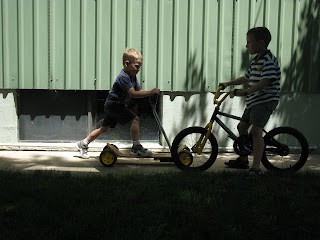 Grandma Dee fed Tristan his cake, so Grandma LaVerne didn't have to get worked up about a messy boy. 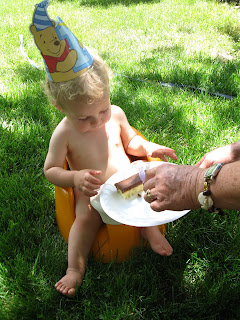 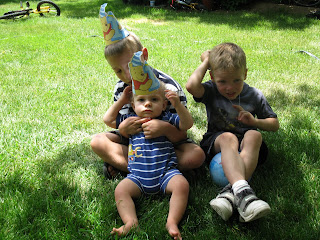 The weather is perfect here in the summer - no humidity, and rarely gets "hot".  It cools off a lot at night (even down to the 30s - which isn't so good for gardeners).  I trimmed his hair this morning.  I thought I was only taking off half an inch, but it sure looks different.  I hope his curls aren't gone!  Without the humidity here, I have to put water and gel in his hair for it to curl like it did in the east.  Either way, he's still a cutie!

I had a goal of helping my mom to declutter her house while I was here.  I didn't know how long I'd have, and now have much less time than I had imagined, so we've made a dent in it, but not nearly what I had hoped.  I will try to do what I can while they are gone for a few days.  She did actually give me the go ahead to toss her teaching materials, which is a huge step.

Happy Summer!
Posted by Living Lavallee at 4:32 AM

We wish we could have been at Tristan's Party! It sounds like it was a lot of fun.

We were so glad that you were able to come visit us in Sierra Vista, even though it turns out you could have gone to Korea with Dean. Hopefully, our encounters will be more than simple bi-annual affairs.