So I came home with the kids recently, and as usual Hunter asked if he could go "the long way", meaning through another part of the building.  He seems to like the thrill of it, so no skin off my teeth right?  So as I get to the door there's a cute little girl slowly walking past our door, eyeing me.  I said "hi" to her, and she said "someone has been ding dong dashing us".  I thought I'd humor her and ask Hunter if he knew anything about it.  He was just inside the door, so I opened it and asked him, at which point he hung his head in shame and was speechless.

I was stunned.  I didn't have any idea that he had such inclinations, or that he even knew what a prank was or how to go about doing one.  I asked him what he should say to the girl (she is about his age, I would guess) and he was still speechless.  I ordered him to apologize, which he did.  Later on I marched him to their residence and had him apologize again.  I had to do a bit of prying to get some answers out of him, like how many people was he doing this to, and why?  Assuming he told me the truth, it was just them because they are close to a door that partitions the hallway, so he had a quick getaway.  So, he's put a bit of thought into all this.  In a way, it's kind of funny, and I have to not let him see me laugh.  Part of the humor is that he is still little, and his conniving little brain is coming up with this stuff.  But on the other hand, those fine people obviously don't see the humor in it and it is no fun to be on the receiving end of pranks.

Growing up we lived on a corner, so we got traffic from three directions (in our town of 400), and it was on the way to the school and church, the hubs of activity in the little town.  So lots of the "good" youth of town would make a point of pounding on our door every time they walked past in the night, loud enough to wake the dead and make us wonder if they were trying to break down the door.  Adults don't always fall back to sleep after being roused like that, so it was really unappreciated.  All these ne'er do wells with so much time on their hands also meant we frequently got toilet papered.  So, with that background, I sure want to nip this behavior in the bud!  Hopefully it's out of his system now! 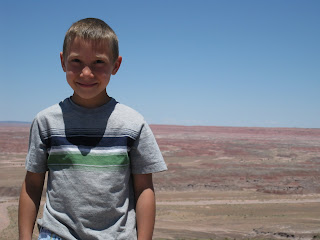 Update:  I met the lady of the house today, and she filled me in more.  Apparently he's done it a lot.  It's been driving her girls crazy.  That time, since we had just been to the pool, the girl who apprehended him had followed his wet footprints to our door (smooth move, Boy).  The lady said that he was loitering in front of their door when she came in earlier today (our "village" had a yard sale today, so some of us were in and out a few times).  I've now forbidden him to even be in that part of the building.  What a punk!  The lady said that it had happened to them in the past.  I pointed out the convenient location, which was why Hunter had chosen them, ha ha, which she hadn't thought of.
Posted by Living Lavallee at 5:48 PM

What a little stinker! I hope that you're getting adjusted there. Think of all the fun adventures you're going to have in the next two years. I miss you guys already.

We noticed Hunter to be devious while you all were visiting us. Hunter manages to beat on Kyler on a regular basis--almost always when you're not watching or available to see. Kyler almost uniformly fights Hunter in retaliation to what Hunter has already done to him. Unfortunately, Kyler, unlike his older brother, has not developed the skill of fighting when you can't notice it...