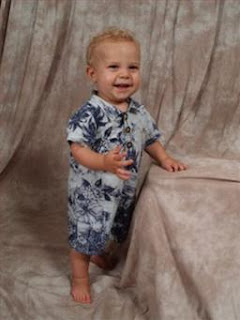 I took my little man to Sears today to get portraits done.  He is adorable, of course, and I want to savor his adorable-ness.  I sat and waited for our turn while the folks before us checked out.  Their baby was also about ten months old.  Their total came to more than $300.  None of their credit cards had enough available credit for the full amount, so they had to spread it over two or three cards.  I am always stunned when the people who cannot afford such luxuries are the (only?) ones who spend that kind of money on them.  I "could" afford to do that, but wouldn't dream of it for all the obvious reasons.  Included in their package were "fine art prints" and "more pictures than we have wall space for; we'll need a bigger house just for the pictures", said the mother.

I am all for people spending money that they have, but the reason for our recent economic collapse is because of scenarios such as this (along with people not having any savings, not to mention planning ahead for retirement, college for the kids, etc.).  I recall an episode of Roseanne where Dan got a job selling hot tubs.  He quit the job after his first sale because the buyer made very little money, but insisted that he "deserved" one, and would buy one from someone else if not from him.  Dan couldn't live with himself selling overpriced hot tubs that people obviously don't need, to people who really can't afford them.   By the way, my mom was scandalized by Roseanne, but she rarely reads this blog anyway, he he.  She did say more than once while I was growing up that "A fool and his money are soon parted."

I politely declined all the enhancements, packages, collections, excessive poses, etc. and spent a total of $17, and got what I needed to preserve our memory of this precious baby at this age.  Oh, and I used a coupon.  So in a couple of months I wonder if these folks will be back to buy $300 more of portraits...
Posted by Living Lavallee at 6:07 AM

I always get a call a few months after getting pictures taken saying that Sears is cleaning out their system and I can get the cd of my entire photo session and the rights to them for $20...you know, the one that costs almost $200 if you buy it up front? I can't believe how much people spend on pictures! It's ridiculous!

AMEN! He is a real cutie Becky!

He is so stinkin' adorable, Becky!! You and Dean sure know how to make 'em :-)