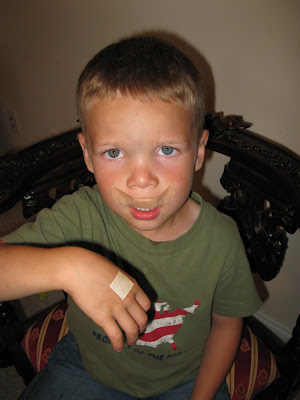 Kyler recently took a fall on his bike.  His story was that Hunter covered his eyes, causing him to crash and burn.  Hunter was sitting on the lawn, nowhere near Kyler's eyes.  They always blame each other for their doings and misfortunes, and even Baby Tristan has been accused by now.  His plight was pitiful though, and we let him administer the bandaids himself.  He had a fat, wounded lip for a couple of days.  His bosom buddy Kadance had a very similar tumble on his bike a couple of days later, and knocked a tooth out.  Ouch!

In other Kyler news, I've been thinking for some time that he needed a chore of his very own.  Hunter has been doing a lot of chores since we moved here, and has been pretty good about it.  He needs to be reminded of them all, but that's not a big deal.  I despise sweeping, and Kyler creates most of what needs to be swept around here, namely on the dining room floor, and seeing that he is capable of it, I declared that it was now his job to sweep up the dining room floor every day after dinner.  The first few days there was much wailing and gnashing of teeth and demands that Hunter do it.  But, a marvelous thing has happened.  He generally does it now without complaining.  I do have to remind him, and it's often the next morning, but he usually says "OK", and does it!  Yay!  I think he is becoming a bit more cooperative in general.  I'll take baby steps!
Posted by Living Lavallee at 11:37 AM

Oh, measurements!! Thanks for reminding me! :)

sweeping, even with a fatty lip. What a trooper! :)

We do high low in primary where they tell me the best and worst thing of their week. Kyler's worst is almost always a story ending up in a injury. Last week he said his high low in one full swoop. "I got to go the playground where they had lots of big climby things and then this kid just whacked me." He's busy, but he's funny and super smart. He gets sarcasm and not a lot of little kids do. Wonder where he gets that from??

I love your stories even though they may not be very fun for you:) Your boys are so funny and I love the bandaid on his lip.haha. Glad to hear that they are helping more around the house. Way to teach them and sticking with it. I can't wait to teach Gavin to do the dishes...that is a job I HATE!