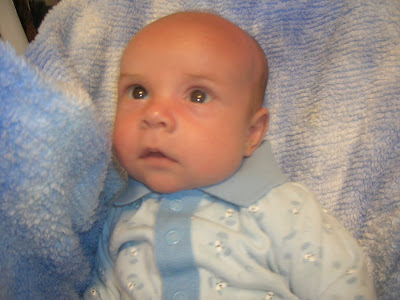 So Tristan weighed 10lb and 14 oz at his well baby appointment on Monday, at 3.5 weeks. He's growing like a champ! He loves to eat and sleep still, which is great for me! 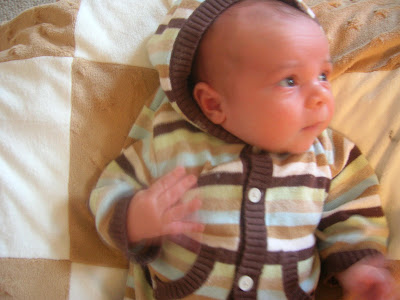 I took Dean to the ER on Saturday morning; he was in lots of pain and agony from the beating. Sure enough, he has a broken rib. There's no treatment for that . The doctor said "that's just going to hurt for a long time". They gave him a knee stabilizer, a long fabric/velcro cast-looking thing to wear on his leg. He couldn't drive with it on. They gave him percocet for the pain. It really helps the pain, but makes him dizzy and loopy. They set him up with an appointment for an MRI on Monday. He saw an orthopedic physician's assistant on Tuesday, regarding his knee. He has a torn meniscus, and the cartilage is roughed up. That's exactly what leads to a lifetime of arthritis. On Monday after being at work all day, his affected knee was twice the size of the other one, and all he wanted to do was lie down and elevate it. The orthopedic folks gave him a knee brace, which is just over the knee, and allows him more mobility, so I don't have to take him to work and his appointments now. So, they are going to start him on physical therapy twice a week, and then he may need surgery to fix his knee. If so, that would likely make him non deployable. I hope that's what the drill sergeants had in mind when they beat him. 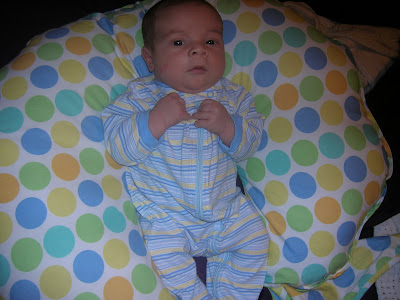 Posted by Living Lavallee at 11:52 PM

OH MY HECK!!! I can't believe they put them through that!!! Poor Dean....I hope he gets feeling better soon.

That is just awful! I can't believe that type of "class" is condoned by anyone, let alone our government. It seems extreme and abusive... I hope Dean is doing better soon.

I'm glad you put up the pics of Tristan. What a CUTE boy!! We hope your family is adjusting well! :)