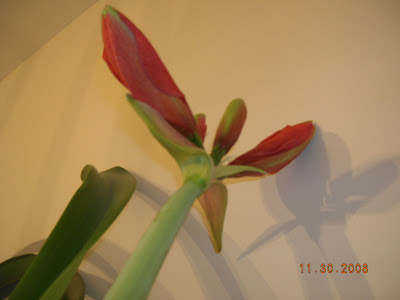 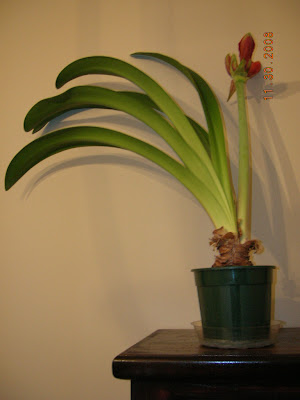 So last year I told Dean that I wanted an amaryllis kit for Christmas. It quickly grew leaves, although being at the mercy of Master Kyler, said leaves got twisted Indian burn style more than once and there were casualties. It survived a week in the car as we moved to NC from OR in September, and I put it in the West-facing kitchen window where it gets plenty of sun. Well, it quickly grew all new leaves and a stalk for the blossoms. The three remaining leaves from last year started looking old and tired, so I cut them off. Now it is blooming just in time for Christmas! Beautiful! My mistake was in not turning it as it sat in the window, so it grew to face the sun and became very side heavy, such that it couldn't quite stand on it's own if wasn't leaning against the window or wall. So I've turned it and put it in the dining room with the sun far behind it, and it seems to be correcting itself as it doesn't just topple over now. It's taken a year, but it is paying off.
Posted by Living Lavallee at 4:10 AM

Wow, that's amazing that you got one to bloom the second year! I've never been able to do that--all I got was long strappy leaves the second year. Wonder what your secret is?? Maybe the moving, Indian burn, etc., etc.!