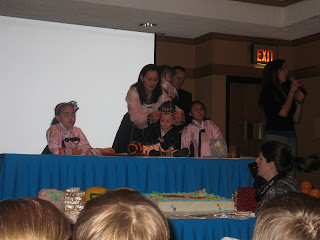 We recently attended the 1st birthday party for our branch president's son, and it was in full Korean style.  Apparently back in the day there often wasn't a second birthday, so they made a point of going all out for the first, which is actually at 100 days (9 months gestation plus 100 days is a year, in Korean age).  So we were told to not just eat until we were full, but until we were "tired"; the tradition continues of going all out.  This guy was actually 12 months old. 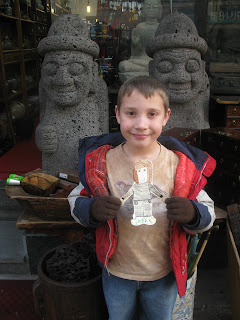 Hunter was sent a "flat Stanley" from a friend in the states, with which he was to take a picture of something Korean, so we all went on a walk the other day to see what we could see. 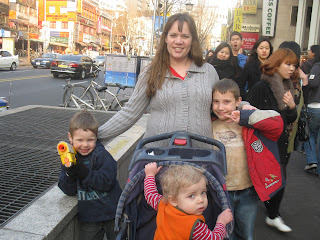 A Korean college student in Itaewon (touristy shopping district within walking distance of us) came to my aid when my fingers were all sticky with the filling from some hoddeok.  He pulled out some kleenex then wanted to practice his English on us.  He took this picture of us, with my camera.  At one point during our excursion Kyler thought it would be a grand idea to run into the street as a motorcycle came racing by.  I don't know how he wasn't hit.  The driver freaked out and stopped to see if he was OK.  Hunter ran out in front of a car at night a while back, and Tristan did in the parking garage at church not too long ago, giving our branch president's wife a fright.  They must all have a mission in life, as they've survived thus far! 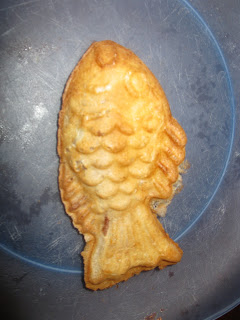 On the way home we got some cheap pizza, and tried out these fish-looking treats.  They are filled with a sweet red bean paste, and are tasty, and were only 1000 won for four of them (about a dollar).  Hunter was just sure there was fish in them, and thought the reddish filling was fish guts... 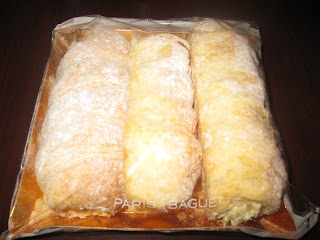 Next I decided to stop by the Paris Baguette Cafe (there's one on nearly every corner here) to get some of these cream horns or whatever they are called.  They are filled with cream and are to die for. 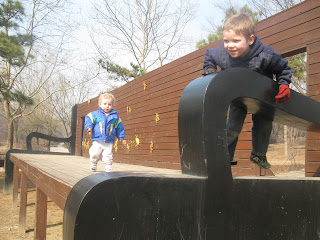 We recently checked out a new park, which had the biggest bench we've ever seen.  Soon after, Tristan decided to tumble into a frozen pond.  I couldn't get to him quickly enough, so he was soaked in the ice water from the waist down.  My friend and I stripped him and put him in a dry coat.  He didn't like that, but was fine otherwise.  I then had to get Kyler to preschool, then rush home to get Tristan a change of clothes, then rush back to the base to my OB appointment...  Tristan was asleep by then, and I hadn't yet dressed him, so I pushed him fast asleep in the stroller through the hospital with just a diaper and over-sized coat on.  He slept through the appointment...  When Kyler was about his age he went with us to visit the Oregon coast, and did the same thing on the beach, only a small wave went over all of him, so he was soaked from head to toe, in street clothes.

Dean's instructor gave him 36/36 on his paper that he turned in recently, and told the class how great it was and that she was going to submit it to be a finalist for the best paper overall.  There are something like 140 people in the course total, broken into smaller classes.  He was embarrassed by all the attention, but he really did work hard on it.  We're down to three weeks until he is home.

Posted by Living Lavallee at 8:21 PM

Can't wait to dive for kids running into the street!

I am so glad that your kids have been protected thus far! How scary!
That food looks so good! Who would have thought that Korea would have such good food! I hope the next few weeks go by fast for you!

Man, you are are wonder mom. I would be going crazy with Jason gone that long and in a foreign country. That is so exciting you are having a girl! Any names picked out?

Oh yeah, thanks for your comment on my better, best post. It made me feel a little better and made sense to me. Thanks!