I finally had an ultrasound appointment, and the tech said that Baby looks like a girl!!!  She said she couldn't be 100% certain, but more than 90%.  I tried to not go in with high hopes.  For one thing, it's against Korean law to tell women before about 32 weeks what they are having.  I'm no Korean, and this is technically an American hospital, but there have been reports of hardcore ultrasound techs refusing to say, and I'm not keen enough to necessarily identify on my own, especially since it's only ever been a boy so far.  There have also been reports of being told wrong at the ultrasound here at this hospital, so I'm still afraid to fully embrace the idea for fear of disappointment at the birth.  But I'm getting excited nonetheless!  We didn't read the book on how to have a boy or a girl, but I looked up the theory online, and we tweaked things accordingly right around that time - so maybe we finally did it right!  Kyler was in preschool during the appointment, thankfully, so I only had Tristan, and he kept busy scribbling on my chart and disrobing his feet.

In other news, Hunter has been placed in the gifted program at his school.  I don't want to make a deal of it to him, because I've known way too many dysfunctional gifted people and it takes a lot more than smarts to function in life.  Hunter has a hard time getting out the door in the morning...  I told him last week that if he couldn't get downstairs for breakfast (all ready to go otherwise) by 7:00 he would have to spend the day (after school) in his room.  He did just that one day last week, so today when I reminded him of that, he was down by 7, and then had plenty of time to get to the bus.  After school we got him a new bus pass since he's lost his last one.  Baby steps! 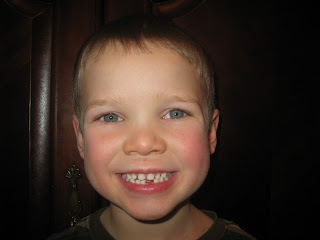 Kyler enjoys preschool.  His teacher said the first week he wanted to talk the whole time and didn't get the idea of sitting and doing his little assignments, but he has since gotten in the gear. He pulled out his tooth that has been loose for some time while in preschool last week, and put it under his pillow once home.  He mentioned that the tooth fairy didn't come after all the next morning, so she snuck in when no one was looking after that and he got two bucks!  Whenever we go to the PX nowadays, he says he wants to buy some "junk food" - his words.  Shockingly, a dentist did a screening at the preschool and gave him a clean bill of health.
Posted by Living Lavallee at 9:34 PM

We will stay optimistic! Glad you can get a couple of hours of peace:)

Your sarcasm and cynicism hearkens to Ann Coulter and often makes for hilarious reading. At the least it's very honest.

Glad to hear you're so circumspect about Hunter's genius.

I didn't know that you could do anything to help determine the outcome of the sex during conception. Isn't 50%, 50% no matter how you look at it? How can you play with that statistical fact?

Curtis, there is much to be done to determine the gender of the baby. Look it up.

Wahoo! Hopefully you won't be disappointed but if the next one IS a boy, he will be at least as precious as your first three. And you will have a head start on knowing what to do with one. . .

I laughed about the dysfunctional "gifted" people comment, since I'm a mother to one of these dysfunctional, quirky types, I'm constantly shaking my head, and I do wonder whatever made them choose the word "gifted".