Dean and I celebrated our birthdays this week.  Another year older and... less in debt?  With fewer expenses these days (hardly any utilities now that we live in base housing, our house in Oregon is FINALLY off our hands entirely, and a bit of homelessness between moves) we've had a little extra ka-ching.  We've never run around spending money wildly, and strive to look for the best deals possible (buying used, waiting for sales, using coupons, asking for a discount, whatever it takes).  Since we've been here, we bought a "fancy" GPS, which turned out to be a piece of crap.  It is Hyundai, and gave directions such as "continue to the underpass next to the overpass", meaning "exit right".  Not only that, if it thought you were speeding - which it was often mistaken - it would sound a most annoying alarm.  We were ready to pitch the thing out the window, especially since mostly what it did was get me lost!  Fortunately we had 15 days to return it to the PX, so we did so happily, and bought a new Garmin Nuvi from a soldier who puts Korean and other maps on the unit, as well as lots of helpful "favorites".  It was $130 less, and so far is worlds better than the previous hunk of junk.

Just before we moved the boys managed to destroy our TV, the only one we had ever paid real money for (real being $140, and it was actually purchased new - on sale of course).  The one previous to that Dean had had since high school.  Since they broke it, and since I spend my life trying to limit their viewing anyway, and also since we've never had cable (and haven't been able to pick up anything with rabbit ears since we left Albuquerque three years ago), I vowed that we wouldn't be buying a replacement.  But alas, Dean is diligently trying to learn to speak Korean and wanted to get cable to be able to watch Korean TV.  So I relented and we found a nice  (smallish) flat screen from a soldier to buy.  I said "Happy Birthday" to Dean, and we called that good.  I did fix him a lovely breakfast, and for dinner we had melt-in-our-mouths ribeyes, and coconut cream pie for dessert, his favorites.  I cooked the steaks in a skillet, and he said he didn't know they could be made so tasty without a grill : )  I bought some Lawry's seasoned salt here, and like it much better than Montreal Steak Seasoning, which I think made all the difference (with some freshly ground black pepper), all rubbed in with olive oil, then seared on high on both sides, then continued on low until cooked to taste.

He surprised me by setting up a babysitter and taking me out to dinner, which was hugely welcome! (My birthday is the day after his).  Anyway, last weekend when we went up to Camp Redcloud, we stopped at some nurseries on the way and bought some plants and a couple of pots - I'll get pictures when I have more planted in them.  They were stamped on the inside as being made in China, but they were lovely and a good price none the less.  We called that my birthday present.  But, a couple of weeks ago, I believe the day we all had lunch together in Itaewon at Burger King, and I assured Dean that I could find our way home without him (then eventually ended up hailing a cab), I passed through a small antique district.  And wouldn't you know, one of the stores had a most exquisite, Victorian-style chaise.  I adore unique, beautiful furniture.  I especially am drawn to older European styles, such as Rococco (we have this bed).  We decided to give our own living room seating a break from the abuse of the children and put it in storage while we are in Korea.  The three-seater grandfather sofa has a big rip down the middle of it (much thanks to Kyler for all the jumping that produced it) 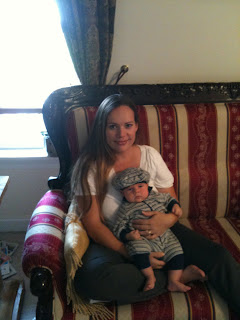 Here I am with Tristan, when he was just a few months old.  So, this sofa needs to be recovered once we get back.  A most wretched cat that we had for a long five years also frequently clawed the sides and back of it, grrrr.  So, we'll be able to coordinate the new fabric with . . . 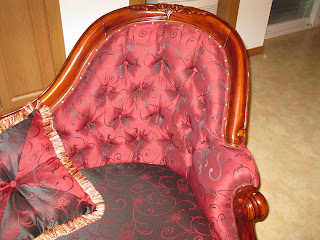 this glorious work of art!  It called to me when I first saw it, and I've mentioned it a few times to Dean...  He has been all about doing something - anything (in his spare time), since we've been here.  After he and I spent the middle of the day at the temple (what a blessing that was), I suggested that he could venture with the children on a walk and find the chaise, or fainting couch.  He did, and with some cash in hand, he bought it!  He got it for an unheard-of price, and it is a new reproduction.  Our children do not belong anywhere near antiques. 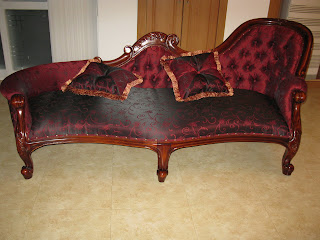 Dean pointed out that it looks a little, well, ostentatious in our home, but we'll figure out how to arrange the furniture soon enough and hopefully make it fit.  I've already told the boys that it isn't for them - they can sit on anything else.  And of course they've already tried to eat on it and put their dirty feet in it, but I quickly chased them away.  We had another fainting sofa a few years back, but it was a gorgeous piece of junk.  This one is sturdy and the real deal.  I first started having interest in antique-style furnishings when we lived in Loveland, Colorado.  We loved it there, by the way, and we lived there longer than anywhere else in our ten years of wedded bliss (nearly three years, while Dean was in vet school).  I had drug him into an antique store and saw one, a real antique, and was smitten.  I never got over that, and all these years later, my patience and lust have paid off!  Dean told me again "Happy Birthday", when he said that he had bought the sofa. 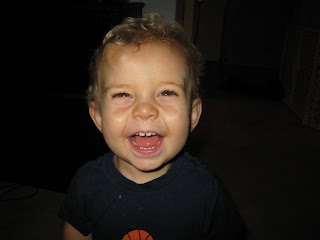 Here are some gratuitous shots of my little guy. 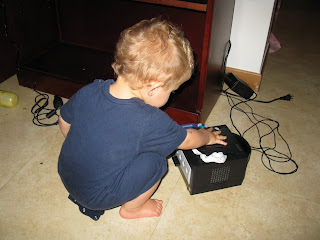 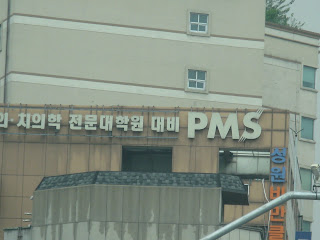 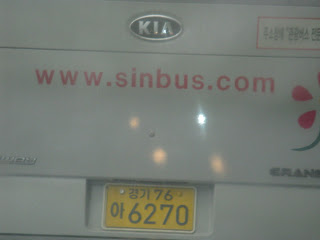 Posted by Living Lavallee at 11:58 PM

Sounds like the kind of birthday Jared and I have. We buy things weeks before or weeks after and say "Happy Birthdday to me:)". Your antique couch and chair is beautiful!

I wasn't aware of your antique furniture passion.