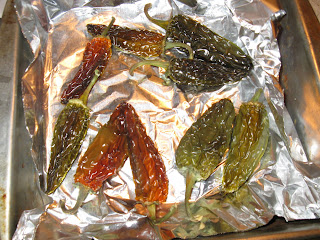 I almost never buy anything just off the shelf or rack without prior research or at least a sale price.  Two exceptions have been my Philadelphia Cream Cheese recipe book (which I have used a lot), and more recently a chipotle recipe book.  My cooking repertoire has become redundant (maybe even stagnant) of late, and while visiting the Grand Canyon, I saw a chipotle recipe book in the gift shop and bought it.  The only trouble is, being where we are now, it is infinitely more difficult to acquire specialty items, namely chipotle peppers, or as many of the recipes in the book call for, chipotles in adobo sauce.  I noticed some jalapeno peppers at our little village commissary the other day, and grabbed them, and thought I'd try to make my own chipotles (they are basically smoked jalapenos).  I don't have a smoker, so the gas oven is the best I can do, and here they are after about 14 hours on 170.  We shall see how they turn out!

I did find some chipotle Tabasco sauce here, so have been using that in some of the recipes.  I did make some almond milk for Tristan, but he won't drink it.  I actually found some canned goat milk at the commissary - same story.  Won't drink it.  I have had a huge reduction in appetite since mostly weaning the little man.  It's amazing.  I even fasted on Fast Sunday for the first time in about 21 months, and it didn't bother me at all. 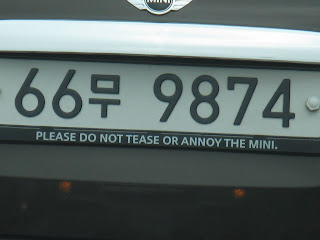 We were finally referred to the Korea Hemophilia Foundation this week, and Tristan has had three infusions of Factor VIII, so his head is mending well.  They also have done some therapeutic ultrasound on the hematoma.  What a relief.  I had to count our blessings while there because nearly everyone there (they all have hemophilia, obviously) was limping.  60% of hemophiliacs are in the severe range, and often by age 25 start needing joint replacements, because blood pooling in the weight bearing joints causes the cartilage to break down.  My dad had a knee injury in his college days that bothered him until he finally had it replaced in his 60s.  It was a complete disaster trying to find the place the first time.  Addresses here aren't very useful.  They imply a sector of the city.  There aren't really building numbers, and if there are street signs (with names of streets) they are in Korean.  Imagine finding an address with those obstacles.  That can't really be loaded into the GPS either.  Needless to say, one of the employees (the English speaking one whom they would put on the phone when I called) finally had to come find me (after I parked in a random building) and walk me (and the three) to the correct place.  It's only about 5km away from us, but can take over 30 minutes in traffic.  I'm realizing that the geographical size of the city isn't all that big.  But it's crammed with 13 million people, so imagine how congested it gets.  I was behind this Mini (picture above) while driving back from the KHF one day. 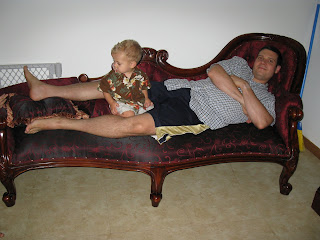 I'm not the only one enjoying our recent acquisition. 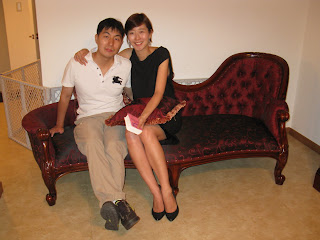 Dean is "mentoring" this Korean army veterinarian.  We had him and his gorgeous wife over for dinner last night.  She works at the Ritz Carlton.  Like many of the women here, she wears high heels all day (which put her over six feet tall - I'm guessing).  I always wonder if their feet don't hurt.  I'd be crippled by a block of walking! 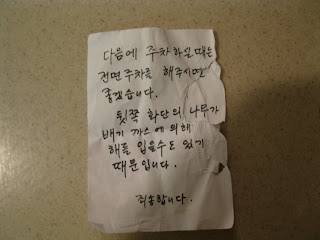 They were kind enough to interpret this note that was left on our windshield (which got rained on) at the temple last week.  We were afraid that someone was annoyed with our crooked parking job.  We had backed in, which is probably more common that pulling in here, by the way.  They said it was very polite and asked that we not back in the next time, because the exhaust is bad for the plants.  Makes sense, and now we know! 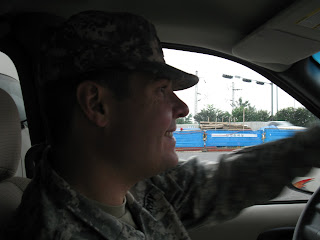 This morning I took Darling Husband to the base from where they left for a field exercise, which is why he's wearing the "patrol cap".  He'll be gone for about two weeks, but should be able to ride a train home next weekend.  When he told me a couple of weeks ago that he'd be going, I was concerned, but I can now go back and forth between our village and the main base, and to the KHF, so we should manage.  Our household goods have arrived, so once they are delivered next week I will have plenty to do! 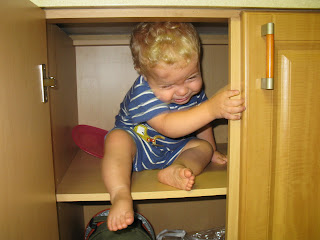 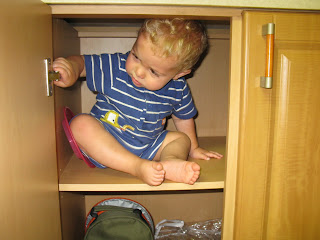 Someone thought it would be a grand idea to climb into this cupboard, but then had troubles getting back out.
Posted by Living Lavallee at 3:56 PM

I always like to read your posts! YOu're a great writer.

Sounds like things are going better now that you are settled in a bit more and found the hemophilia people.