After moving out of J-ville, we spent four tedious and unremarkable days driving west and made it to Grandma D's in Albuquerque.  She always goes the extra mile to spoil and pamper us.  Apparently I didn't manage any pictures of her...  We spent several days with her and visiting friends and relatives and seeing the sights in Albuquerque like we were tourists.  Dean's friends are awfully smart and it's always fun to meet up with them.  I only managed to get pictures of some, namely Dave... 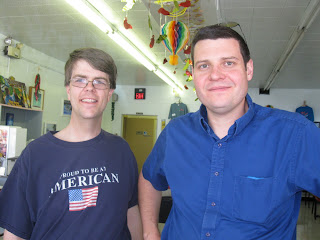 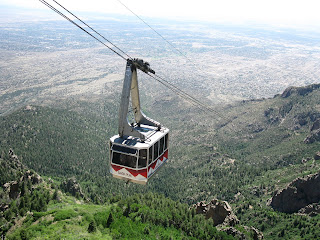 We went on the Sandia Tram - the world's longest continuous tram.  Being sea level folk now, the 10,000 ft altitude royally winded Dean and me.  We hiked around a bit up there, but got light headed.  Hunter is mildly afraid of heights, but braved the tram and did fine. 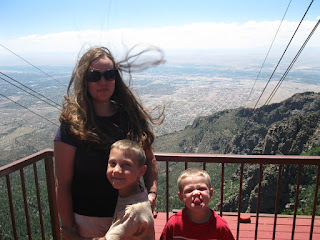 Kyler has a new picture face - namely to stick out that long tongue, which can touch his nose.
The boys were particularly excited to see their cousins.  I hadn't yet seen miss Krisanne, who is nearly two.  Jaelan, who is six months younger than Hunter, has quite outgrown him. 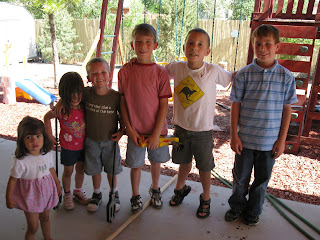 We were all excited to eat at Bob's Burgers.  Yum!  I didn't even get the hiccups until the end (I get those
when the food is particularly spicy hot). 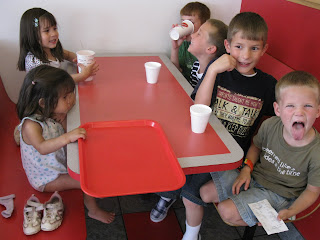 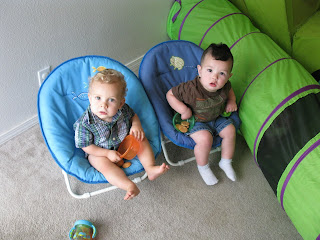 The Adams Family is always fun, and Tristan and the J-man liked sizing eachother up. 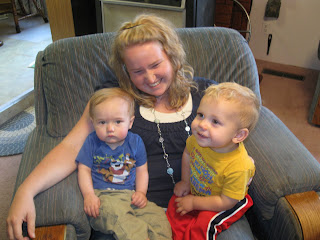 Then, it was on to Ramah, my home town of about 400 people.  We saw my nephew Nathan for the first time.  He was born ten days before Tristan. 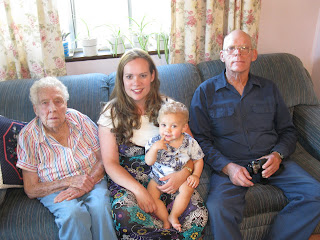 Here is a four-generation shot with my grandmother, who is in her 90s, and my dad. 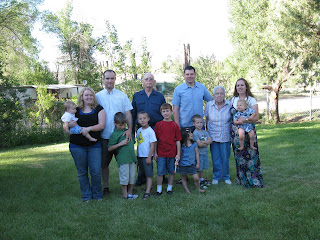 We brought my sister Nikki's kids to Ramah with us, or three of them anyway.  They had a ball at Grandma's, and playing with the cousins. 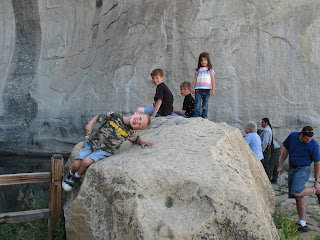 We went to El Morro National Monumen, also known as Inscription Rock.  Juan de Onate, the first governor of NM, as well as many other people as far back as the 1600s wrote on it, including a relative of mine in about 1916, Ezra Merrill. 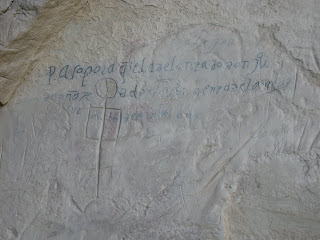 Really, it's graffiti, but it was long enough ago to qualify as historical, so they preserve it. 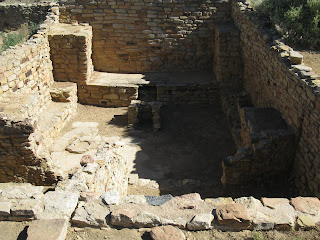 There are cliff dwellings on top of the monument, and apparently up to 1000 people lived there at one time, I think in the 1200-1300s ish.  We hiked the two-mile trail with five kiddos. 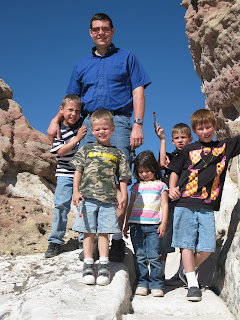 Then, we had to get back on the road and start the trek to California.  This travelling business is getting old, and I'm getting grumpy.  Just ask my Darling Husband. 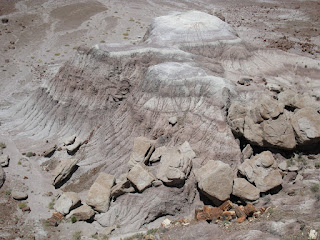 We went to the Petrified Forest and Painted Desert today, which were grand.  We drove the 28 miles into it, and walked around some. 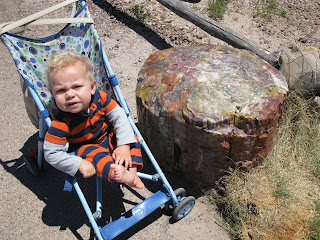 Here's Tristan next to a lovely bit of petrified wood. 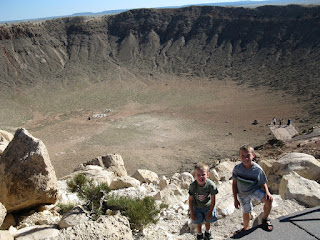 Last, we went to the big crater/meteor site in Arizona.  I had seen it before as a kid (as well as all these other sites in AZ), and didn't feel like paying $15 for just myself to get in, so Dean took the boys.  It still added up to $23 for them, for being there about an hour, which is outrageous to me.  It was $10 for the car load of us in the Petrified Forest/Painted Desert, which is reasonable.  While I waited in the car (and fed and changed Baby and all that) I watched a number of people who also were sticker shocked and left without seeing the crater rather than pay that much.  One such group was a man with five women and a couple small children.  The women were wearing the long pioneer dresses and their hair in the encased buns.  Hmmm.  That group would really have cost a fortune, and they didn't do it.
Tomorrow - on to the Grand Canyon, then to L.A.  All tomorrow.  Ugh.

Posted by Living Lavallee at 1:36 PM

I wish I would've known you were in Holbrook! I would have met you there!!! Glad your travels have been safe and sound:} Great pictures.

What cute pictures of all the cute cousins together! Glad your travels to this point have been safe. Good luck with the next leg.

Looks like fun adventures for everyone! You are missed, but we sure love seeing what you are up to and all the fun places you are getting to see!