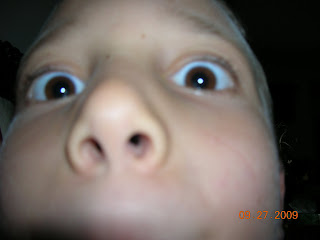 I've been filling in playing the piano for primary (children's Sunday School) for a couple of weeks, so I happened to be in there today when the primary president asked Hunter if he had his talk ready, to which he nodded, so she had him sit up front with the other participants.  I was certainly not aware of any talk, and you can guess who writes such talks around here.  I snuck over to the primary president and looked over her shoulder to see the day's topic.  It was repentance.  So, I went back to the piano and quickly looked in the Children's Songbook (the available resource I had to work with) under that topic, and found a song called Repentance.  Soon the primary president told Hunter it was his turn, and he said "I don't have a talk", so I ran over and helped him.

I had him introduce the topic, which he did very well on his own, basically saying that "If we repent we can live in Heaven..."  Then I opened the songbook to the Repentance song, and told him to READ it.  He proceeded to start singing it.  He doesn't know that song, and neither do I.  I again told him to READ it, but he just kept singing away. I tried another time or two, then finally gave up and he finally got through it.  So I proceeded to tell him what to say, and he started singing that too.  ARRGH!  I finally got him to knock that off and just TALK.  I had him throw in an example of how he can repent after he fights with his brother, yada yada.  Then, thankfully, if was over.  I mentioned the scenario to Dean, and he said "oh yeah, the primary president told me last week that he had a talk, and Hunter had a paper saying so..."  That's pretty much the story of my life.

By the way, Happy Mother's Day!  The boys were very excited to wake me up and give me the presents that they bought me with their own money.  Daddy took them to the store and they each picked out a pair of  earrings.  I wore one of them to church.  He said he had to guide them in that direction, as they wanted to buy me a TV - must be because they broke ours and are going without, as I'm in no hurry to replace it!  Hunter had a handful of gifts he had made at school as well.  They were very sweet and excited to give them all to me.  Dean made me an omelet and toast, which they all served to me in bed.  It was wonderful!
Posted by Living Lavallee at 7:08 AM

That is so funny. Perfect Mother's Day example of why the Moms are in charge!! LOL. I love that he was trying to sing everything :)

What a crazy boy! Too funny. Glad they semi-made up for it with all the things they got/made for you:)

What a spot to put you in! But I'm sure everyone enjoyed Hunter's "talk" and it will be remembered. Cute boy.

Love it - what a handful your kiddos are!