Yes, we did. We left the children and took a little solo trip to celebrate our tenth anniversary which was last month. I AGONIZED for months trying to decide if we would and what we would do. Hubby usually puts me in charge of such things, which has its ups and downs. We both aren't very keen at making decisions, i.e. should we go on a date? where do you want to go? what are you going to order? I dunno? - it's ridiculous, really. I kind of wanted to go to Europe - after all, Travelzoo advertises such hot deals; Dean kind of wanted to take a cruise. Neither sounded very exciting if a baby was to tag along, and we weren't sure if we could get anyone (namely a grandma) to watch the children. So back and forth we went for months. "I have to give notice to take leave", said Dean many times.

We finally secured (suckered?) my mom to come out here and stay with the kids. The plan was for her and my dad to come to DC and meet up with us so they could visit the capitol while we were somewhat able to show them around (as if we know our way around - but certainly better than they do). Then, they would drive back here with us and stay around a few days with the kiddos while we went somewhere (anywhere) on our own. I still wasn't convinced about leaving Baby with Grandma - he is in the frisky stage and I just didn't know if she would want to keep up with him.

Then, at nearly the last minute, an angel offered to take my little man! She LOVES babies and so do her girls, and he was happy as a clam with them. I was beyond relieved! (Thank you, thank you! You know who you are!) I probably would have just taken him with us otherwise, which would have been OK, but it was indeed magical to have a few precious days to ourselves. The only concern at that point was that he still nurses - I go at least a year with the babies (he's 9 1/2 months now). He had only rarely had a bottle. But he had a ball with all the angels who cared for him, and as soon as I walked in he wanted to nurse - never missed a beat. I had dutifully taken my fancy pump along and came home with about four pounds of the good stuff, which we managed to keep cold the whole time. The freezer is now restocked. I had been pumping up a supply for him to have while we were gone, and there was just barely enough. My mom stayed with the older boys at the house and hopefully had a good time with them :)

So, I'll work backwards with our little vacations. We decided that it would be nice to just see what there is to see more locally. I can't imagine that we would ever again have occasion to live in North Carolina. Asheville seems like a happening place, and the thing to do there is see the Biltmore House, the largest "house" in America. We came close to passing it up since it cost so darn much to see it, but fortunately we gave in and indeed it was worth it. Asheville is about six hours away. I learned that it is the house used in the movie The Private Eyes, that I watched many times as a child. We had it on "disc", if you remember those (before VCRs). Dean hasn't seen the movie, so it should be coming in the mail today via netflix. 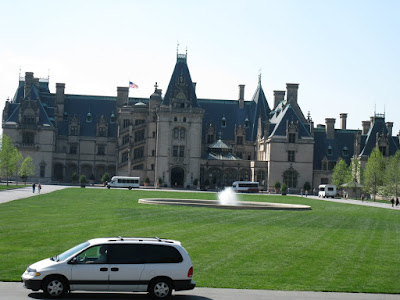 There are four stories and more than 250 rooms. It was the house of George VanderBilt, whose family was to the oil and railroad industry of the day what Bill Gates is to computers today. It took six years to build, and still seems to employ a large portion of the local population. 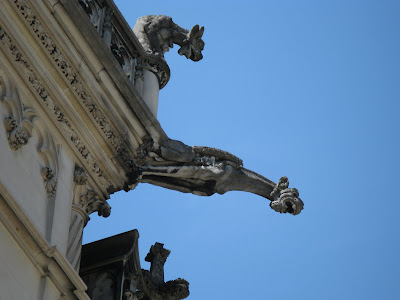 I love gargoyles, and was not disappointed. I believe the one above was in the Private Eyes movie - I still remember that. 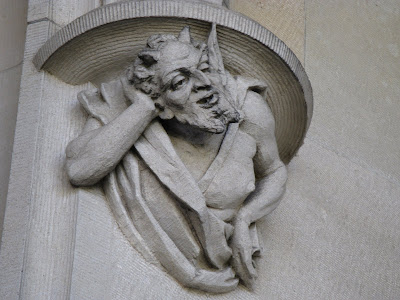 I am in this picture below. Inside of this part is a four-story, wrought-iron chandelier. It was amazing, as was everything else in the house. Pictures were not allowed inside, which was kind of a relief, because people would probably move too slowly through the house, and a person could never take a picture of everything she'd want... I loved the furniture, of course, the architecture, everything, and the house is a showcase for many works of art. Entire rooms were designed to hold certain pieces of art, including a painting that was taken from a ceiling in Europe. 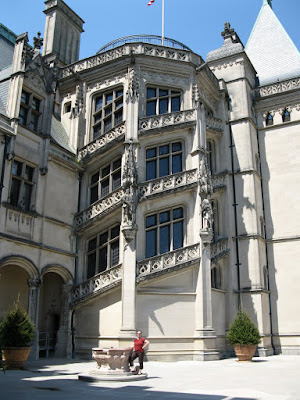 This is just a portion of the house. I don't begrudge people spending their own money on what they see fit. Apparently it took up much of his inheritance to do this, but that was his money. He didn't go into debt to do it, nor did he die a pauper, and it is a gem for all the world to see now. 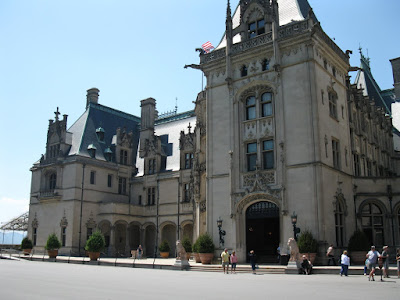 There was much to see outside on the grounds, such as this fellow below. 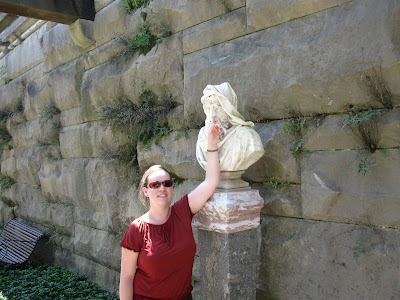 This is one end of the house. I love turrets. Dean says I like any house with a turret on it (I always point them out, after all). 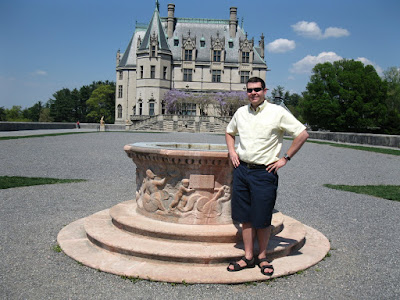 I didn't see the title of this piece anywhere. 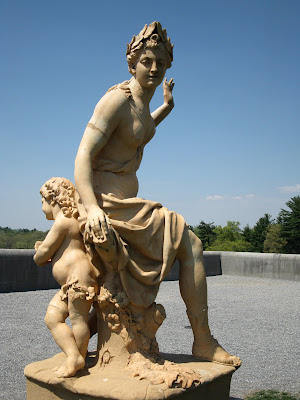 I would call it "Swat the bum." 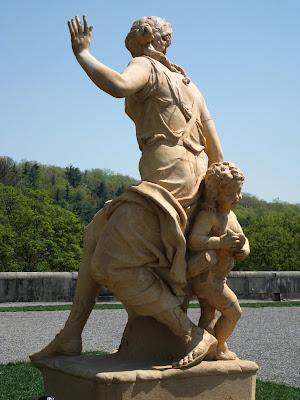 This was the view from one balcony - simply beautiful. The property was just as planned as the house itself. He hired a landscape architect who planned for the placement of millions (yes, millions) of plants and trees. It was to make it seem natural, but in fact was totally planned out. 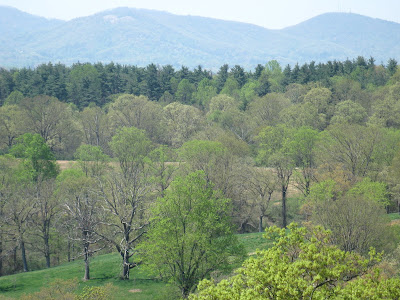 A lovely waterfall. The house is on several square miles of land - not as much as he originally purchased, but the drive was a few miles on the property. 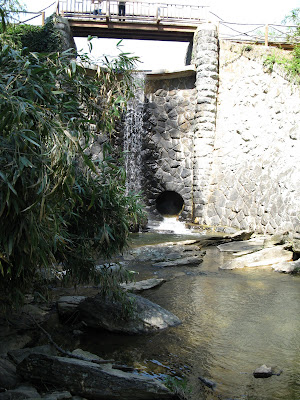 I had this same purple plant in my entry way in Albuquerque, as well as lamb's ears, like the ones below the purple plant. These were in a green house with many other beautiful plants, succulents, flowers, orchids (in bloom), etc. 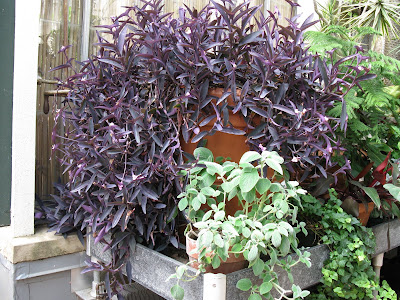 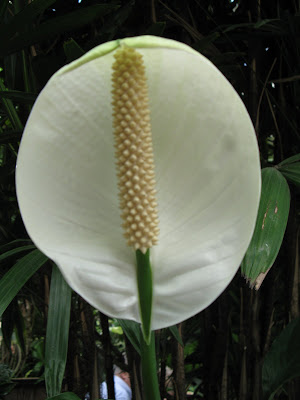 We happened to go during the "festival of flowers". The spring bulbs were glorious, and there were fresh flowers galore arranged and placed inside the house. Some are grown on site, and others are purchased from a local grower. There was an entire "floral staff". 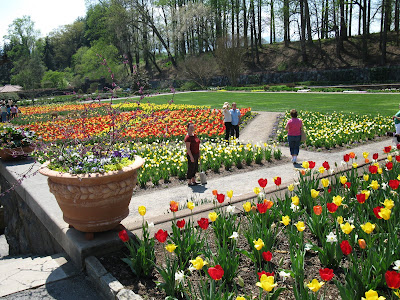 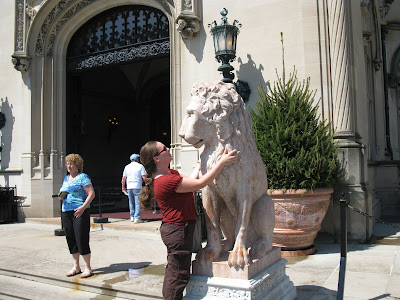 On the way to Asheville, we took the slow and windy mountain route to see Chimney Rock. Once we got near it, Dean looked it up on his trusty iPhone and found that it was $14 a person to see it. It was late in the day, and I hate feeling like I'm being ripped off, so we passed, and "saw" it from a distance. 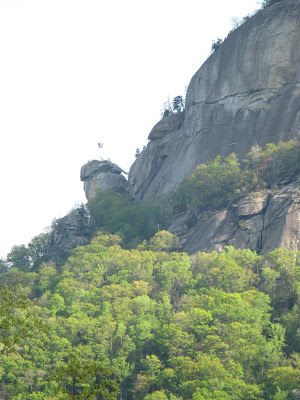 We ate at the Bavarian Dining Restaurant one evening while in Asheville. Dean had never experienced German food. I had some while visiting my sister there several years ago. He had a roulade with noodles. I had a schnitzel topped with melted Muenster Cheese and Black Forest Ham, and hot potato salad. The salad before hand was tomato, onion and a dressing. Having the tomato-dislike gene, I normally can't stand them (except on a good burger), but this was good stuff. We had some of their homemade bratwurst for an appetizer, and for dessert I had cream puffs and Dean had a Black Forest dessert. It was all yummy! 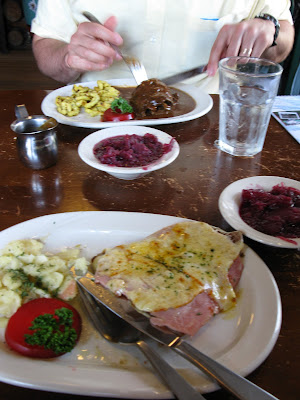 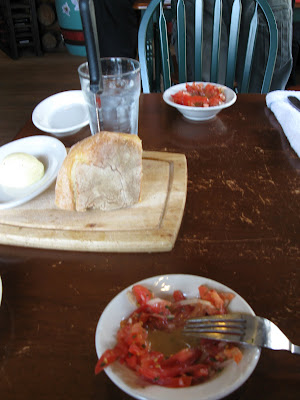 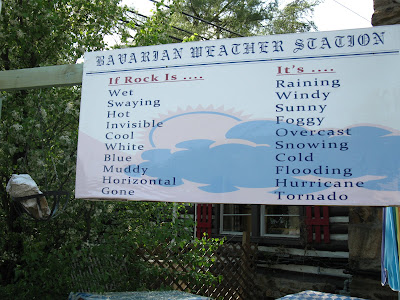 There was a random chimney after Chimney Rock. I'm guessing the rest of the house burned down around it some time ago, and vandals haven't demolished it yet. 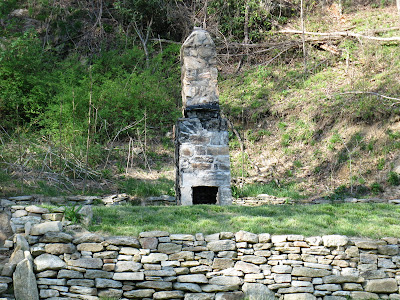 The first night of our trip we decided to take it easy and only made it as far as High Point, NC. I looked at furniture at a few stores. I was good and only 'looked' - like I buy much furniture anyway, I mostly just lust after it. We ate at a yummy Thai restaurant - Dean always looks on Yelp via his iPhone to see the reviews. I occasionally will make a Thai curry for dinner, but need to branch out a bit and learn to make more stuff. It sure is good! We saw Avatar that night. It made me motion sick. Fortunately I didn't vomit, but still didn't feel good for most of it. Neither of us cared much for it. It was certainly a leftist propaganda show.

I'll post about our DC trip and the rest of the month later...
Posted by Living Lavallee at 11:32 PM

I know what you mean about a "frisky" stage... Connor is scooting up a storm!!! and since he's starting to pull himself up and cruise around, we can barely keep up with him!! It's so fun though. :)

Looks like you had a great time on vacation! The pics are amazing! :)

That place looks amazing!! What a great time that would be. I'm glad you had fun. Congrats on going to SK. When do you leave?

I guess I didn't clarify that, yes, Mom did stay with the older boys and had Tristan for the day on the day we came home.

Wow, that looks so fun! Love the pretty flowers, and that "tree view" picture looks like a painting! I guess they did plan it out well... I've seen that funny rock sign somewhere before but didn't know it was right here in NC! I definitely agree with you about Avatar - could have been cool, but they had to ruin it with the liberal spin. Anyway, glad you had a fun trip!