Here are a couple of pictures of the boys at a children's museum I took them to in Wilmington a few weeks ago. They especially liked firing balls out of the cannon, as did all the kids there. 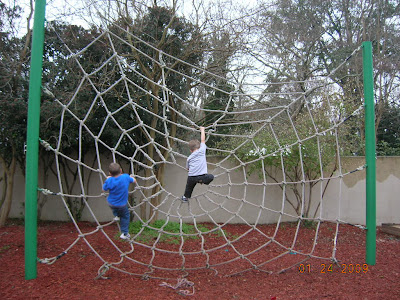 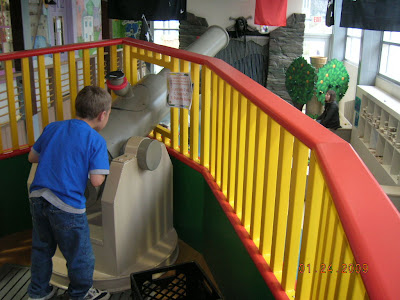 I was recently pointed to this blog, and it's great for some laughs . . . It makes sense if you know the lingo and culture of younger Mormon women.
http://seriouslysoblessed.blogspot.com/
I don't know if it's spring fever trying to emerge, or boys will be boys, or that Dean has been gone for 7 weeks now or what, but the boys have been extra feral lately. I don't really blog about how wonderful my children are, like everyone else does. It's kind of hard to find the good in them sometimes (especially when I don't get a break while hubby is gone), such as the other day when I walked in on Hunter charging out of the kitchen with my 10" chef knife after Kyler (mind you that's a 10" blade, and my knives are professional). I don't believe he was really trying to hurt him, but at six years old I would have thought he should know better. He was getting a rise out of Kyler, and thought it was all fun and games, apparently. He doesn't get to touch so much as a butter knife until Dean's home.
Hunter can be a really sweet kid most of the time, actually, and has stellar behavior at school and usually at church. But put him together with Kyler at home, and all hint of common sense and responsibility go out the window. They spend all their time brawling, screeching, wounding each other, tattling, trashing the house, etc. If either one is alone with me, he is generally cooperative and will do what I ask, but throw the other one in the mix, and all they will do is antagonize each other, driving me up the wall.
Kyler isn't innocent by any means. If anything, he usually has the upper hand in their brawls, at three years old. Last weekend for instance, we had company over, which, granted, will rile up any young kid, and Kyler got hold of a boyscout belt, and hit Hunter on the side of his neck with the buckle end of it. It produced a mild hematoma, but with some frozen green beans on it immediately for half an hour it went away within a day or so (hemophilia boy has been pretty darn lucky so far).
As another example, the other day Kyler had hold of Hunter's hoodie by the hood (with Hunter in it), and Hunter was on the ground on his back. I was nearby, and Hunter was screeching to be saved. The boy seriously needs to learn to defend himself a little. I told him to turn over, which he finally did and was able to get out of Kyler's hold. To some degree, Hunter has trained Kyler to be a fighter/wrestler, as he started wrestling with him when he was three and a half, and Kyler was six months old. Kyler couldn't even sit up yet, but loved rolling around on the floor with Hunter. Kyler can also be very sweet when he wants to be, and loves to cuddle and snuggle (when Hunter's not around), so we do plenty of that during the week while Hunter's at home.
So today, Saturday, I'm looking forward to maybe going out to the park with the kids, or otherwise doing something fun. They, on the other hand, just want to do their usual behaviors, namely brawling near my bedroom and screeching/tattling loudly. I told them to take it elsewhere, but that didn't happen. So I sent them to their room for an hour, and there's always the stipulation that it must be clean after said hour if they wish to come out. As always happens, though, they spent the hour further trashing their room (which wasn't bad to begin with) and brawling. The marines are often firing artillery, which rattles the windows a bit. I seriously can't always differentiate between that and what goes on when they are put in their bedroom. I don't usually hear the artillery on Saturdays, so I don't know if it was them jumping off the furniture in their room - or whatever they do in there, or if it was actually artillery. So, it's been three hours, and they are still in there, "we're starving", and still nothing has been picked up, and all they will do is point fingers at the other who isn't helping. I have no sympathy. If they would just do it, they could pick it up in 10 minutes, but they'd rather rot and starve in there. That's fine with me!
In four months we'll bring another baby boy into this mix (mess?). Dean keeps telling me that this one won't necessarily be as wild as his brothers. But for survival he my have to be... 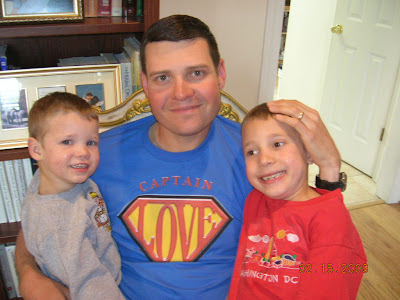 We did have a lovely weekend with Dean home, and it happened to be Valentine's weekend. We didn't even try to go out on V-day, as the restaurants fill up pretty fast with 50,000 marines. We did go to the Olive Garden for lunch on Monday before he left - and still had a fifteen minute wait (the marines had the day off as well, for the holiday). I found a blue t-shirt a couple of weeks ago that had the Superman insignia on it, only it says Captain Love (that's pretty close to Cpt. Lavallee). I knew Dean would love it; he's been wearing it back at training. I also got him a box of truffles, as he loves truffles. He got me some herb and vegetable seeds, and I've been starting what will be our garden, in the house.
Dean finished with the three weeks "in the field" at Officer Basic. It was tedious and sometimes poorly orchestrated, as there was a whole lot of sitting around. They ate MREs a couple of times a day. Some are better than other, he says. They slept in big heated tents on cots. He used the ear plugs they were given for the firing range to help him sleep at night (30 men in a tent makes for a whole lot of snoring/flatus all night, believe it or not). He graduates early next week, but then has additional veterinary training for a month. And, he is now assigned to be deployed to Iraq in November, so has a lot of additional training throughout the year, including at the very same place he is now for two more weeks in April (a week after he finishes OBC), and again the very week I'm due...
So that sums up our lives of late. Can you tell how cheery and blessed I am??? I think my nose is starting to swell, along with the rest of me, by the way. 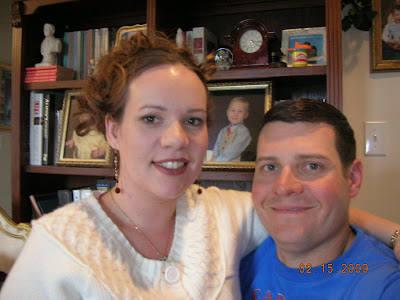 Posted by Living Lavallee at 2:07 AM

I feel like you most all the time about my kids. I just talk good about them on my blog so I can remind myself that there are some good things about them and so I don't dwell on the negative. Way to stick to your guns on leaving them in their room. I'm glad I'm not the only mean mom! I hope your pregnancy is going well. Take it easy!

Becky... Your stories of the boys wrestling and beating on each other... they ring SO FAMILIAR. :) Seriously girl, you are NOT alone. My boys are the exact same! We love them anyway....

Isn't motherhood wonderful . . . ??! Why didn't anyone tell you it would be like that? Well, we all go or have gone through similar and you want to ring the sweet little necks. As Kristal says, just keep thinking those positive thoughts and remember the good times--when they're sleeping, etc.!