Life is a little dreary and boring with Dean gone for nearly five weeks now. He gets to come home for a four-day weekend over President's day, so we're all looking forward to that. We don't really have TV to speak of, as I refuse to pay for it. So I watch some of my favorite shows online after the kids go to bed (CSI, House, 24, NCIS). One night there wasn't anything to see, and I was bored out of my mind (but too tired to do anything productive), so I restarted a netflix subscription. But, I'm too technology challenged to get DVDs to play in the computer (I tried), and the DVD player on the DVD/VCR combo isn't working, so I found a Magnavox very basic and small DVD player for $30 at Walmart. We have a small TV (that the former owners of our home in Astoria left for us) that I was about to freecycle. Instead, I set it up last night in my bedroom, and watched Cinderella Man, which had come in the mail. That's pretty exciting stuff around here lately! I enjoyed the movie, by the way. 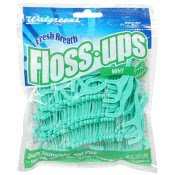 I've never gotten in the habit of flossing, even though my parents faithfully took us in for cleanings twice a year and I always got lectured by the hygienists about flossing... I've been using Listerine since we got married, and I always justified not flossing in my mind because I figured the Listerine did just as much. But alas, I've had to have a number of fillings done or redone over the years, and had to have a root canal last year. I would then start flossing and do it for a week or two, then give it up. It was tedious and annoying to thread one of those hand held flosser things, and just as unpleasant to use my fingers, so I never kept up with it. Then a few months ago on a whim, and with a buy one/get one coupon - plus a sale, I bought a couple of packages (90 count) of floss ups. I don't think I've missed flossing since! And I'm stunned every night at how much food I get out of my teeth, after thoroughly brushing. My jaw is small, hence all the teeth straightening I had done as a child, so my teeth are close together, and it is impossible to get all that out with just brushing. I don't mind flossing now at all. There's no threading, no tedium. I just grab one and get it all done in half a minute or so, and I'm sure my teeth are thanking me. Getting all that stuff out is rewarding, much like squeezing a black head out of a pore.
Dean is terrible about getting the oil changed in his car. He had it done sometime in the summer, then I drove it across the country in September, and it's not been done since. Don't even suggest that he do it. The last time (6 years ago or so) it turned out a bloody mess (literally) and he vowed he would never do it again. (I'm much better about taking my car in, but Dean took it to Texas, so I'm stuck with his). So, a few weeks ago the "service engine soon" light came on, so I figured it really needed to be done. I took it in, and of course they acted like the air filter was so filthy that chunks would be falling out if it was turned upside down, and they would change it for $15. I declined, and headed over to walmart, and got one for $8. So, I actually changed it myself, without a hitch. The "service engine soon" light has not gone off, though, so that's annoying. And of course they had a list of $250 worth of maintenance that needed to be done according to the mileage. I told them I'd consult the hubby, who did say that most of it should be done. But then how do I get it over there for the day, and get home with Kyler, with no hubby around yadda yadda. We'll see. It's on the to-do list.

Living with a bird, and presently being responsible for said bird, I am keenly aware of how much and how often they defacate. The Birdie Birdie in the Sky wasn't written for nuthin' (you know: ... drop that white wash in my eye; I don't care, I won't cry; I'm just glad that cows don't fly... to the tune of Twinkle Twinkle Little Star). Anyway, Kyler observed as we were driving around today that birds were sitting on power lines, and he asked what they were doing. Well, they were just sitting there, but that's never a good enough answer for Kyler. So I said they were sitting there pooping. That is a topic near and dear to Kyler's heart, as it is one of his fond daily activities. He asked if they wipe their bums. How do you answer that? He didn't understand "no". So after that, every time he spotted some birds sitting on power lines, he would say "There are pooping birds". Incidentally, I wondered a while back why birds aren't electrocuted by sitting on power lines. Dean is a font of knowledge, so I asked him, and he said it's because just one line is not a closed circuit (or something like that) and they would have to be touching both lines in order to be zapped (imagine the amount of poo that would come from that size of bird!). He explained that it's the same as household electrical outlets, which have two holes (and there are two prongs on plugs), to complete the circuit. Anyway, like I said it's pretty boring around here! 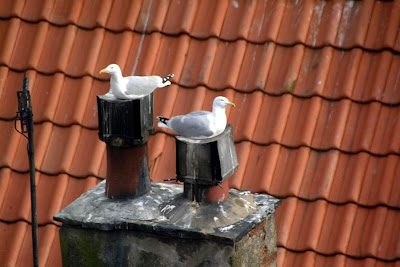 http://www.freefoto.com/
Posted by Living Lavallee at 4:17 AM

Sonicares are great too for the flossing thing. They are really expensive though. But I am amazed after I bush with it and then floss, there is very little left. It makes my hygienist happy too. One of those things I have learned in my wonderful profession of dentistry.

Yeah for flossers!! I love em too!