Just kidding - we didn't participate in any Columbus Day activities, but Dean got another four-day weekend, which is always welcome! He did have to go in for a couple of hours on Friday to see some dogs that had just returned from Iraq with their handlers.

Saturday we decided to go to the temple in Raleigh, about 145 miles from here. It is a small temple, so we had to make an appointment, but it worked out nicely. I got on craigslist to see if I could find a sitter near the temple for the boys. It makes for one long day for a sitter when you leave them back home and travel hours away. I did get a sitter, but afterward we decided it probably wasn't the best idea to find a random person on the internet; she was a nice teenager in a nice home, and she apparently had other kids there as well, and she was only about a mile from the temple... it still made us a little nervous while we were separated from them, but whaddya do?

I'm not normally much into fishing, but a while back on a Friday night I wanted to get out of the house and go do or see something family friendly, so Dean's first thought was to go down in a bay on the base and try his luck at catching good things to eat. He caught a few fish that were too small, so had to throw them back. He set his crab net and actually caught a blue crab. He and Hunter both used their shrimp nets and later in the evening caught some shrimp. I don't know who first thought of eating shrimp! They look like a big nasty bug with legs and long eye things and antennae (not at all like the tasty things that are all prepared and ready to eat). The boys had fun running around with other kids that were there. That's a shrimp net in the picture, by the way. He and Hunter 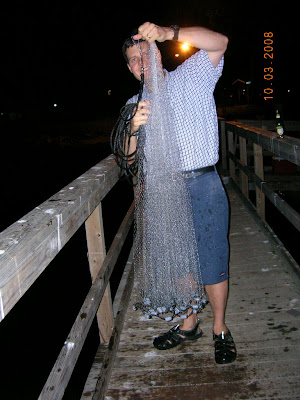 Our back yard here is ginormous. It took me an hour and a half to mow the front and back lawn in Astoria. Dean said a while back that he had decided he should help with such things more. Lo and behold, he followed through and did it. It took two hours just to do the back! As I had never seen such an event, I took a picture. You can't much see it, but that's him in the surgical face mask, sparing his allergies. 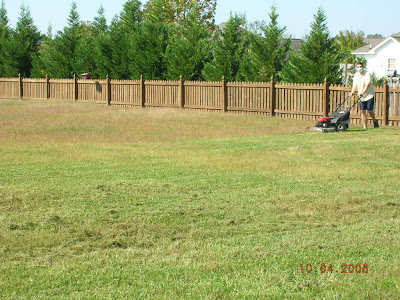 I got together with a lady from church last week at a nice park so Kyler could play with her kids. He has been stir crazy at home with me. He rode that pelican like he was going to take off, and had lots of fun otherwise. 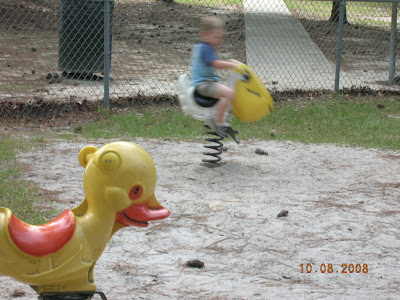 I am still unpacking and hanging pictures and all those things I do so often since we move so much. I am also job hunting, since the buyer for our house fell through, and Dean makes a fraction of what he did in private practice, and we are sinking fast. We haven't had any other bites on our house...
Posted by Living Lavallee at 9:49 AM

Hi Becky,
Sounds like you guys are enjoying life on the "other" coast. Sorry to hear your buyer fell through! Give Dean a big "boo-ra-ya-ha" for me :-)

So sorry to hear that afterall, your home didn't sell. What a worry! Hopefully that will work out for you. Looks like you're having some new and interesting adventures in NC. Your yard looks like a park! And I thought we had a huge yard and lawn to mow! There you just mow the grass and Voila! instant lawn. Must be nice. Bet they've never heard of automatic lawn sprinkling systems so hopefully you get plentiful rain.