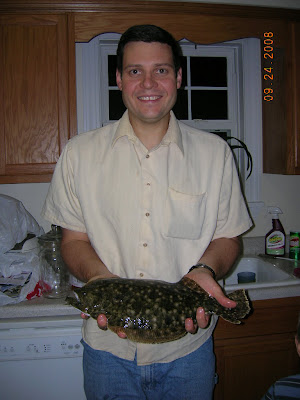 Dean has come to judge the quality of living in a particular city or area by how good the fishing is. We loved Astoria, OR, but he was never able to dig (clams), catch (fish) or trap (crabs) much, and was sorely disappointed there. Here, he is doing great in that department, and took Hunter shrimping the other evening. They came home with a 16" flounder. He watched an online demonstration on how to fillet it, and the next day I found a scrumptious recipe and cooked it up for dinner. The boys would hardly touch it, and Hunter even put on a show by gagging up the one bite he took. So Dean and I enjoyed most all of it.

Dean did have a discussion with the Sergeant Major, by the way, about how to respond to "Oorahs" from the Marines. It was a lengthy discourse about all the potential meanings or nuances that could be behind the "greeting", much like all the possible implications of an "aloha". There is only a subtle difference between a Marine's "oorah" and a Soldier's "hooah", so potentially they could be mocking him with a "hooah" (50,000 Marines and a dozen Army Soldiers makes one feel like a walking target), in which case Sgt. E. recommends hitting them. He says he does it; anyone below his rank qualifies for a hit. Hmm. That's an idea, but probably not one Dean will apply. Perhaps it is just a friendly greeting. He can't really respond with a "Semper Fi", not being a Marine. So at this point, still no definitive answer.

I did venture on to the base on Saturday for the first time without Dean. He was working, as the VTF was hosting a vaccine/microchip clinic outside. They had one of those big jumping things for kids to play in, so I took the boys (and a scrub top Dean requested) to say 'hi' to Daddy and to play in the jumper. The big mascot dog came by and gave the kids candy as well, and Kyler spent the rest of the day asking where the Army dog was. I also went shopping at the commissary. It's amazing! Not too much fun with the boys along, but the prices are sweet! I was disappointed in how expensive the potatoes are here. They were cheap in Oregon, like $2 for a 10 pound bag was the regular price. It was more like $6 here, at the commissary! Sweet potatoes were only .50/lb so I got a bunch of those instead.


I'm still getting the hang of being a military wife, and have been afraid of doing something wrong on the base and getting flogged - or whatever they would do to me. Dean tries to assure me that I have nothing to worry about but I have my doubts. I sure feel silly when the MPs at the gate to the base salute me; Dean says it makes him feel silly too. One of the techs called the other evening to ask him something. It used to be 'Dr. Lavallee'; now it's 'Captain Lavallee' that they ask for. He is loving the Army so far.

Church was nice today. People have been welcoming and Dean already knows a lot of them. The military people come and go as their assignments change. Kyler became a little aggressive toward the end in nursery, as another child got him with the door or something along those lines, and he had a little battle scar on his face to show for it. He hasn't been taking naps much lately, so is a grouch after noon most of the time. I cannot imagine how he is going to do as a Sunbeam in a few short months.
Posted by Living Lavallee at 11:33 AM