I'm so far behind I feel too overwhelmed to try to catch up, so I've continued to neglect the blog. I've been trying to complete this post for months!

Dean met up with Bro at the SW Washington Fair in August to see Weird Al in concert, with Hunter and Kyler in tow - their first concert.  "It was fine," said Hunter, the ever underwhelmed.  Kyler had a blast, of course.  Dean doesn't take pictures, but he picked up a great concert t-shirt, which he wore with a funky wig to our ward's halloween party, as Weird Al.

Halloween was fine as always.  I'm not the kind of mom who creates fabulous costumes.  The kids are generally happy enough to go through our box of costume paraphernalia and come up with something satisfactory, perhaps picking up a new thing or two.  I didn't manage any pictures, but we went to the ward party, and trick or treated in downtown Gig Harbor at the homes and businesses as it rained lightly, which it has since mid October.  Dean took them in our neighborhood.

Speaking of Weird Al, Dean went to karaoke at the watering hole near the clinic on a recent Friday night with some of the staff from the clinic, who are regulars. He sang Weird Al's White and Nerdy and wore his Weird Al concert shirt - we're getting lots of mileage out of it already :)
Dean took all the boys camping in August.  Cambria and I held up the home front while they did their thing in the Olympic National Park near Hurricane Ridge, with Tristan being up much of the night and wanting to come home to me (how flattering).
Dustin and Patti and their canines came up for Independence Day, so we celebrated our wonderful country  with good food on our new grill - compliments of Josh, and softball and frivolity in the back yard.  Dean was stunned that I played ball.  We watched the fireworks that night and did a few of our own at home, and in all had a wonderful day. 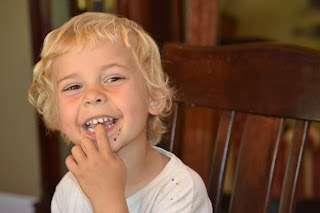 Posted by Living Lavallee at 8:23 AM

I'm getting pretty bad about the blog thing myself - reading or writing lol! But it's great to see pics of your little ones; they are so big AND pretty, if I might add!! Love Tristan's hair!!

Great update even if it is a little belated. Had no idea about all the news!