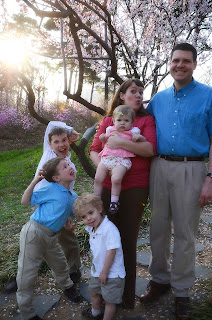 Hunter has been hounding me for a new blog post.  I have too much to do to spare the time to blog, but alas, now it's 10pm on Saturday, and since Criselda (our weekly angel) was here today, the house is in order and I might as well!

We had family pictures taken while the cherry blossoms were in bloom in April.  They were beautiful, of course.

Some pictures were silly.

Some were super cute!
And I managed to go another year without buying "school pictures".  I refuse.  I love these ever so much more! 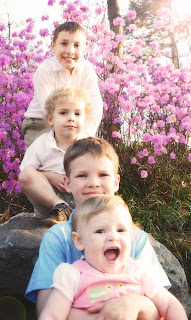 When we met the photographer at the Korean National Museum, she said "You've done this before!" - since we weren't all matchy matchy.  She said it makes for better pictures.


Daddy-O left the next day on a free space available military flight to the U.S. to visit the clinic in Washington State that he and his partner-to-be are buying.  I am thrilled to witness him go through all this process and I finally feel like we are becoming grown ups.  Weird, huh?  With our gray hairs and crows feet.

The prospect of settling down for real is enough to make me salivate.  We will be moving next month for the sixth time since he finished school 8 years ago.  I had hoped that it would only be once. 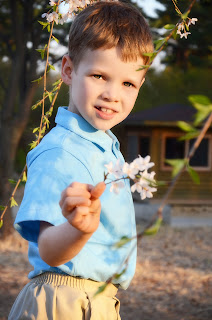 But, we look back and see the Lord's hand in each of the moves, and how they have been purposeful and have prepared us for what is next.  The timing of Dean deciding to leave the military, Josh coming back into the picture and wanting to be in business together, the two of them exhausting literally every other possibility for starting or buying a suitable practice in a place we would actually like to live, then this particular practice coming up for sale when it did, are far too much to be coincidence.  Indeed, we are blessed.

The children have been resilient with all these moves.  I've come to realize that Hunter is an introvert.  He likes to play with other kids and be around other people, but he doesn't need that, and is just as content to enjoy a good book.  He told us the other day about a new series he has discovered at the library.  He has been reading one a day.  He's usually the last kid to get on the bus after school, as he's got to stop by the library.   He likes to have multiple books going at once in case he finishes over the weekend and can't replenish right away. 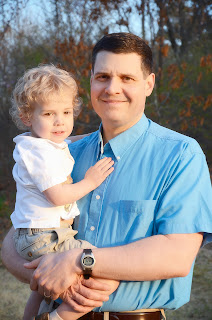 Kyler, on the other hand, thrives on social interaction and knows everyone here in our village, and everyone knows him.  We have to admonish him to come inside and eat breakfast in the morning before school, or he would spend all that time greeting everyone outside our balcony doors as they get on the buses.

Tristan no longer has the cold weather to deter him from trotting outside, so we have to be vigilant with the chain on the door.  This morning in the six o'clock hour we heard (from upstairs and down the hall) the front door open and close.  I always lock the chain at night, and it is high above what he could reach, so maybe Hunter had gone out to get the newspaper and left it unchained?  He likes to read the comics.  Anyway, Dean grabbed a robe and ran down to find Tristan out on the sidewalk.  That's my boy!  I had to pull him out from behind a truck at the commissary the other day as it started to back right into him.  He is obstinate and wouldn't come along with me, as usual.  He is our love bug, and great for laughs. 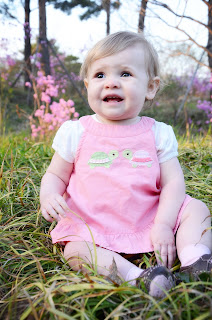 Cambria went through a second round of antibiotics to kill a nasty double ear infection (first augmentin, then cefdinir).  She was weighed during each of the appointments, and I was not surprised to learn that she had gained a whole pound in two weeks.  She has been eating as much people food as she can get her hands on, in addition to nursing.  She has 16 teeth, at ten months, and weighs over 20 pounds.  She can take bites out of pears and apples, chew meat, and so on.

Give it to me, Baby!

Posted by Living Lavallee at 11:41 PM

I love hearing about your family! I love the first picture :) I cant wait for you guys to get settled down too. I am feeling that need myself....