Shut In and Stretched Out 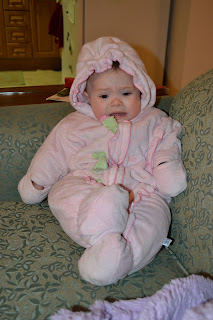 It's cold here in the winter.  Probably not any colder than Ramah, NM, but this is what Cambria wears outside.  She has started crawling now.  She's not racing around yet, but moseys her way along. 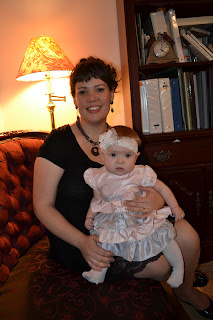 It sure is fun having a little girl to dress up for church.  Her hair is getting long enough that I'm not sure what to do with it, as it sticks out of the little bands now kinda funny. 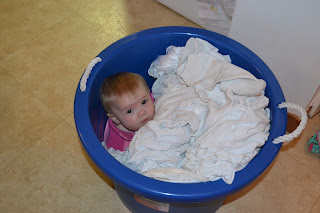 Sometimes it's easier to haul her upstairs with the laundry.  I long to not have to go up and down stairs. 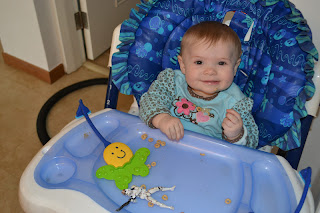 She eats lots of cheerios.  The trick is to keep the boys out of them. 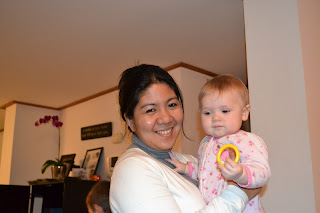 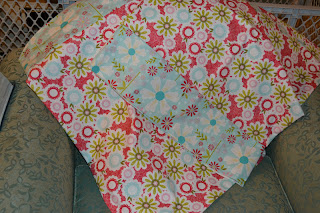 I've made a few pillow cases of late.  A fun, simple project, especially with the fabric available here in Korea. 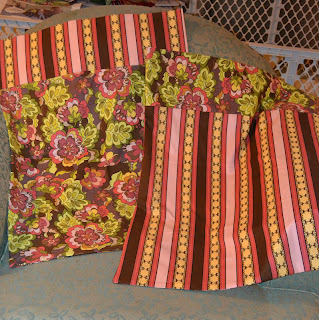 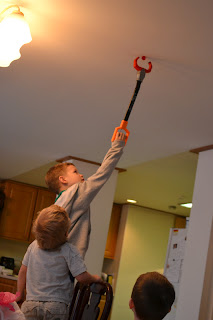 Kyler found a use for his grabber toy when the ball stuck to the ceiling. 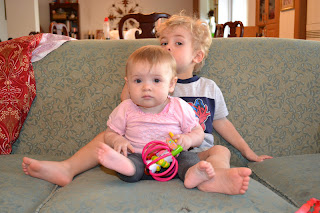 Tristan and Cambria do entertain each other much of the day. 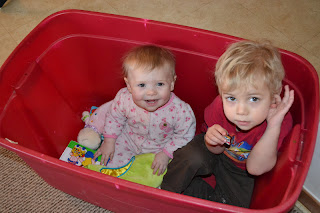 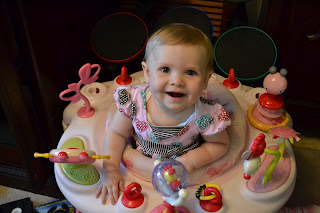 2/3 of us have been sick of late.  The only one diagnosed is Cambria, who has the flu.  Not sure which was worse for her in diagnosing that - shoving the q-tip up to her brain to get a sample, or having to hold her arms straight up for chest x-rays.  She was not amused.  Tristan is rather ill as well, though I didn't take him in.  The doctor said it's probably the same thing.  And, sure enough, I started feeling achy and unwell around the same time as Cambria.  Kyler stayed home from school about 1.2 days this week - also not feeling good and croupy coughing over one night.

You know these guys aren't up to par if they are willingly lounging around.
In Hunter news - apparently he hasn't been around for pictures much - he has decided he wants to have glasses, so is up to about two weeks now of putting his shoes on the shelf.  Hallelujah!  Maybe there is hope.  Also, the pills came and he has been taking them for a week.  It's probably too soon to tell if he is improving, but we're hopeful.  He doesn't want to lose his fidgety-ness - not sure why.  His second quarter report card came out (right about the time the pills came - so not because of the pills) and there was an A on it, and no Ds, which is much improved from straight Cs and Ds the first quarter.
Posted by Living Lavallee at 11:06 PM

That little Cambria is sure cute! Pretty soon she will have long locks of hair for you to curl:) Awsome news about Hunter!

So sorry to hear the flu bug is passing through your home--not fun. Hopefully you'll all recover soon--or wait, maybe its nicer when they willingly lie low ;)
Cute kids.

We had the flu around here too. It stinks. It's kind of fun when you can start doing little girl hair....when they let you:)