Bloody the Lip and Black the Eye

This blog is turning into a hemophilia log, it would seem.  I've had a bit of an epiphany.  The reason we had almost nary an issue with Hunter as a tot was because he didn't have any older brothers around.  Kyler has been involved in every single incident we've had with poor little Tristan.  The latest were last week. 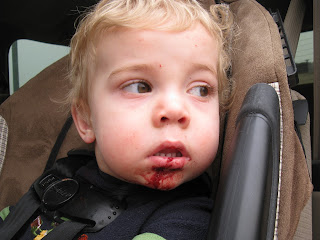 Kyler and Tristan were up on Kyler's twin bed playing. Then a couple of days later they were playing together on a living room chair; Tristan fell off both.  He was left with a smallish hematoma (knot or bump) on the back of his head, and a cut lower lip.  I decided to watch the lip and see how it did.  Sunday morning it was bleeding but stopped by the time we went to church.  He managed to fall off the pew onto the hematoma but it didn't add much to what was already there.  Monday morning his lip was quite bleeding, and had been all night. It was most pitiful as he bled all over his toast.
I took him to the hemophilia clinic where they gave him a dose of factor.  They are open business hours, so aren't an option on the weekend.  They always love to see him and comment about how handsome he is.  They did "physical therapy", using ultrasound to help break down the hematoma.
At the clinic they asked about Hunter's ear.  I had kind of forgotten about it since it isn't actively bleeding any more.  I picked him up from school and took him over to the base hospital to see if I could get the ENT doctor to have a look.  He did right away, and said there was still so much dried blood in there that he couldn't see the membrane (ear drum).  This doctor is only about the second one I've ever encountered outside the hemophilia community who has even the slightest snippet of knowledge about it.  He asked Hunter if he was descended from European royalty, which Hunter didn't know anything about.  He also asked if he had hemophilia A or B, which is more than most would know to ask. In other Hunter news, his teacher told me last week that he had basically stopped doing his homework and finishing his class work when he began the gifted program.  He will be kicked out of the program if he doesn't step it up.  It's no surprise, but I told him how disappointed I was and that he's back to a 6:30 bed time (lights out) and he's more than welcome to eat dinner once he's shown me his completed homework...  My mom thinks he's a distracted child.  I think he is just lazy and disorganized.

Posted by Living Lavallee at 10:58 AM

Man I cannot even imagine having kids with hemophilia. Regan would be a mess, she is so accident prone. I can't believe how expensive the factor is!! Does it get better as they age?

LOL my Tristan is loving mascara lately also well I shouldnt say latley for a long while now.

The factor costs according to how much is used; the bigger they are the more they need. My dad's costs about $5000 per dose. I think the pharmacy outfit that he gets it from jacks up the price because the insurance pays it. Nuts!

Getting those owies is bad enough but being reminded of it for days is even worse. Poor little guy!