Really and truly, a lot more goes on in our lives than I manage to blog about. Let's see, I missed blogging anything about Christmas, the boys' birthdays... yeah the big ones.

So, Dean finally bought me a hole thingy that I can put the card from the digital camera into, to get the pictures on the computer, since whatever dork who designed this computer didn't include one! I'm totally technologically challenged, yet Dean is a natural. He doesn't care for computers, though, but he can seem to do anything with them. Before he left today for Texas for the week for training he uploaded the current pictures from the camera via his laptop to our (home) public network (whatever that means, really) because the (my) computer wants to format the disk with the hole thingy, which even I know enough to know that that would likely erase the pictures on the disk... so, here goes some recent memories...

And, by the way, he got an email today from his soon-to-be commander in Korea offering to help pull some strings to try to get our family to all go together to Korea! That is by no means a guarantee, but we'll take any offer of assistance!

The decision to not let us go was completely unwarranted. Most people we know would never know that we're currently raising two hemophiliacs, because it's hardly been an issue since they have it mildly! Granted, when you hear "hemophilia" images come to mind of bleeding to death from a paper cut, but that's not us! My dad has lived with it for 71 years now, and is really doing pretty darn well with respect to it. Medicine has come a looooong way since he was diagnosed after circumcision about 70 years ago, so it hasn't been any issue whatsoever yet for Tristan (we don't circumcise our boys), and Hunter's only needed treatment for planned surgeries such as ear tubes, tonsillectomy and adenoidectomy, and once when he got a cut on his head as a toddler. We had clotting factor on hand for each of those times, and we have more of a clue about what is going on and how to treat than any doctors we've run across (except of course for the hematologists who run the hemophilia treatment centers where the boys are followed once a year). Anyway, we're crossing our fingers and continuing our prayers.

It breaks my heart to think of Dean missing out on Tristan's entire second year, and baptizing Hunter when he turns 8, and Kyler's wild and crazy ways. The last time Dean was gone for a week (just a few weeks ago) Kyler was climbing the walls - I can't imagine a year of that! Anyway, I'll stop now and just narrate the pictures. 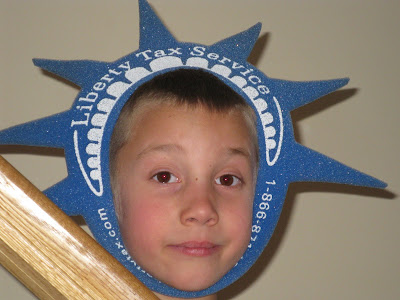 Got your taxes done? Here's Hunter to remind you. 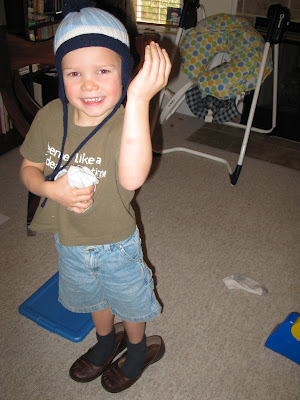 Kyler still has that shoe and hat fetish (that hat goes to an outfit that fits Tristan right now, that was Dean's when he was a baby). 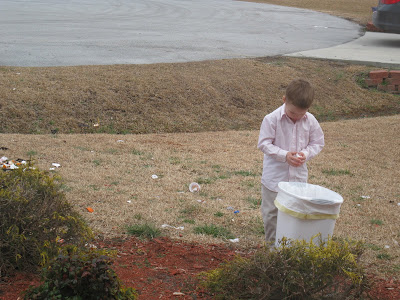 And here would be Master Kyler cleaning up a mess that was due to his negligence. I had asked him the previous day to take a sack of trash out - of which he is perfectly capable. He took it out and threw it on the snow. Some neighborhood dog came along and tore up the bag, scattering the trash all around the yard, and the snow melted. 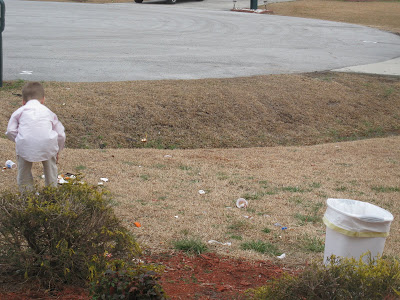 So, I gave Kyler the trash can and sent him out to do it the hard way, since he wouldn't do it the easy way (and just put the trash bag in the trash barrel in the first place). It took him a while, tears were shed, and we had to lock the door to keep him out there, but eventually he finished (with a smidge of help from Mom at the end). Hopefully a lesson was learned, but I'm not holding my breath. 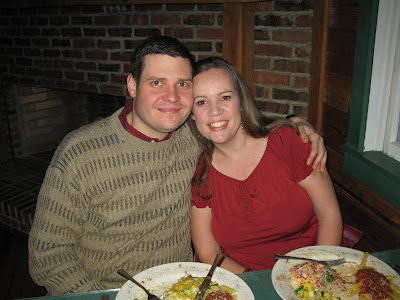 Here I am with the love of my life enjoying a date for Valentine's Day. We ate at a fabulous restaurant in Swansboro - the White Oak River Bistro. We had delicious seafood. Our window had a river view. Yes, I'm still nursing Baby if you can't tell by the Holsteins in the picture. It was chilly so Dean wore an obligatory sweater - that only happens about once a year, and only after my suggestion (or prodding - I love man sweaters, but my man is perpetually hot and avoids hot clothing). Dates are always so magical - time out without the children. We don't do it often enough, so when we do it is so nice. We recently celebrated our 10th anniversary, by the way. I didn't get a picture of that, but we went next door to Riverside Steak and Seafood and again had a wonderful meal. 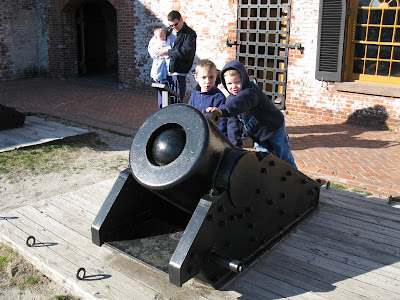 A week ago we visited Fort Macon, about an hour from us. It has a lot of history, including being held by the Union and Confederate armies, and was even used through WWII. It was beautiful weather, and perfect for the boys to run around and check out weapons like cannons. 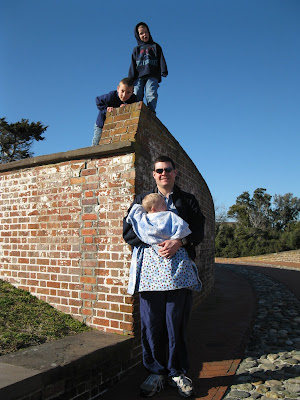 The boys never forgo an opportunity to climb a wall. 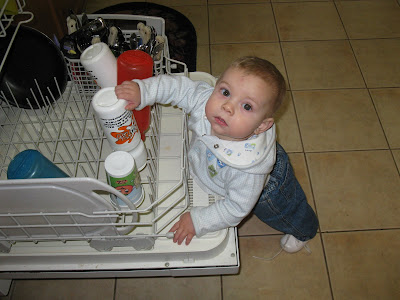 Tristan is very much mobile now, and pulls himself to stand. The only problem with that is that he doesn't know how to get back down from standing yet. So much to learn. He is the sweetest little angel, and hardly fusses at all, except when Kyler picked him up and then tripped and dropped him and fell on him the other day - which did leave a large bruise on his forehead. 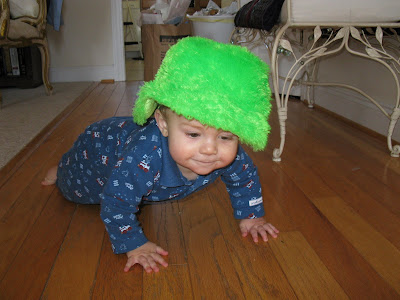 Tristan crawls in style with one of Kyler's favorite hats. 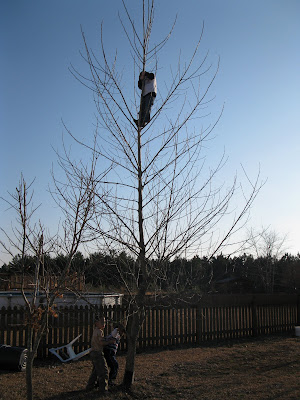 And, that would be Kyler in the tree. I am a mother of boys. I accept this. I let them be boys. Other people often shudder when they see my boys in action, for instance up in a tree. Somehow, knock on wood, we haven't had any broken limbs yet, and I have learned to trust my instincts. In this instance, they said to grab the camera. He got down the same way he got up - by himself.
Posted by Living Lavallee at 1:19 PM

Love the pictures! THe boys are so cute and congrats on your 10th anniversary. You are so pretty in that picture of you and Dean. Jared is the same way with sweaters. I also love for him to wear a sweater but will wear one like once a year.

I love the family pictures!! You guys look wonderful and your boys are super cute. Thanks for sharing :-)