Two years ago when we lived in Astoria, OR, we had Thanksgiving together as a family, just our family, which was ok. Just ok. Dean and the boys spent the morning trying to catch tasty creatures from the sea, and I spent the morning slaving away in the kitchen. Then we sat down for the big meal, and thirty minutes later it was all over. I decided I didn't want to do that again. It is hard living so far from family that we can't get together very often for the holidays. Last year we drove to Florida and met up with Dean's family near Disney World, and even went to the magic kingdom on Thanksgiving day. This year we decided to drive to Connecticut and visit Dean's uncle that he hadn't seen for probably 15 years. I had not ever been to New England, so there was lots to see. It was surprisingly much like Astoria, with many older Victorian homes. There were old, beautiful, stone churches galore, which I love to see. We spent two days driving each direction, for a total of about 700 miles each way. We stayed the first night in Washington, DC in a hotel close to the capitol. We toured the Mall in the evening. It was dark, so it was pretty cool to see the monuments and memorials in the light of the street lamps.

The next three nights we stayed at a hotel in New London. Dean took the boys swimming in the pool once, and I took just Hunter one time. While I was in the pool with him, an old man was in the water. He wouldn't leave Hunter alone. I just didn't know what to make of it, and my mother bear sensors were on high alert. He kept asking Hunter questions - must have been hundreds of questions. They seemed more or less friendly and innocuous, but with all those questions, he got out of Hunter his first and last name, what Dean does (military, etc.), our family makeup, our religion and more. I would tell Hunter to swim, to do a down-and-back, that there wasn't any point in being in the pool if he wasn't going to swim - so he would when I told him to. But this guy just wouldn't stop asking him questions when he'd swim back. I didn't know if he was just a lonely old man, or if he was hoping to molest/kidnap Hunter if he could get him away from me, or what the heck he was up to. He asked him so many questions that Hunter couldn't get away to swim in the pool, except when I stepped in and told him to go swim. That was what bothered me so much. Hunter didn't go to the pool to answer questions from a stranger, to the exclusion of swimming. But while that guy was there he couldn't do anything. Hunter is pretty trusting of people and would get pretty close to him in the water in order to hear and answer. That made me nervous, too. I do NOT teach my kids stranger danger because it makes no sense (read the book Protecting the Gift to learn much better things to teach children). I also don't force them to be polite or affectionate to anyone they aren't comfortable with (that book says that doing so shuts off their danger instincts).

I asked the guy a few questions to slow his torment of Hunter. He's Catholic, but no longer practicing because he decided the church just wanted money. He's Polish (as was Dean's Grandmother whose home we visited that Uncle Jerry now lives in), and a retired engineer. He never said a word about his family; he wasn't in the pool with anyone, so I don't know if he was in the hotel with anyone, or visiting family or what he was doing there, or if he is a child molester. He was from another part of Connecticut. Finally another family came to the pool and this old guy got out, got dressed in the bathroom, then put on his hat and floor length fur coat, (which also weirded me out) and left. I kept a close handle on the boys the rest of the stay in the hotel, not that I wouldn't have anyway.

So, in discussing it with Dean, he pointed out a few things. He says Polish people are very friendly - and he would know. (On a side note, the first time I took Dean home to meet my parents my dad told Pollack jokes). He also explained that New Englanders are very talkative, just like Dean's late father Norm. So, maybe that was just it. Maybe he was just a friendly, talkative old gentleman. I guess we'll never know. I didn't necessarily get any bad vibes from him, but it weirded me out that he wouldn't let the boy swim! He totally monopolized Hunter's pool time. 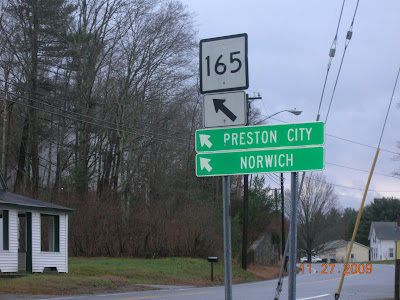 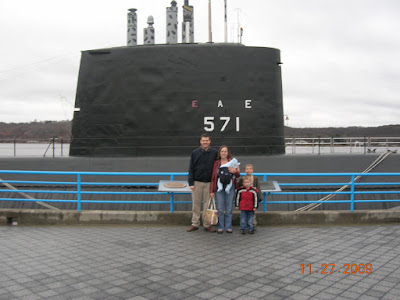 Becky and the boys in front of the submarine in New London, CT. 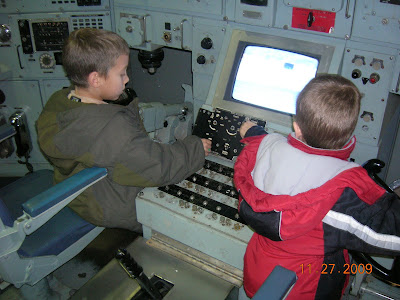 Hunter and Kyler at the controls on the submarine. 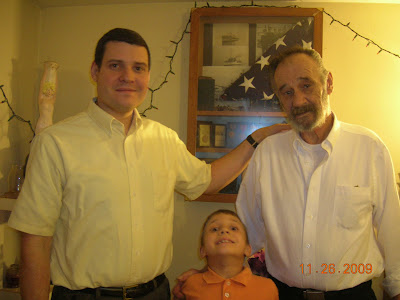 Dean, Hunter and Uncle Jerry in Preston, Ct.
I'll post more pictures when blogger will cooperate and let me :)
Posted by Living Lavallee at 1:19 AM

it's so hard to tell what's a threat any more. Things we did as children (like walking to elementary school by ourselves)is unthinkable now... Better to be safe than sorry, I say! But, at the same time, it's a shame it has to be that way.

Sounds like you had a great time for Thanksgiving. Hope your Christmas is happy, too! :)