I picked up some virus this last week. I dread knowing that I'm coming down with something, especially with the current hysteria over the pig flu, as Dean calls it. I looked up pig flu symptoms with Dean, and certainly had some of them (muscle/joint aches, fever, cough, runny nose, sore throat, headache), but not the quick onset, so who knows if it's "just" a cold, or worse. The worst fear, of course, is passing it on to Tristan, which unfortunately I did. He's a day or two behind me in the course of it. It's always so sad to see little babies sick. He's a champ right now, though, with a mild fever, cough, and runny nose. He hasn't been fussy over it at all yet. This is the first time he's been sick. He and I stayed home from church, which was too bad because it was the annual Children's Sacrament Meeting Presentation. I was looking forward to that. Apparently, the swine flu may not be severe; in fact the site I read from said that most cases have been mild. Hopefully it passes soon, whatever it is.


We were alerted last week by the primary president at church that Hunter was perhaps too zealous in his singing. After some input from some wise ladies (Kristen and Shayna), Dean made the decision that Hunter should sing however he desired (he desired to be the loudest). Dean was told in the MTC how awful his singing was, which really shot him down, and he hasn't had any desire to sing since (although he does dutifully sing at church; his singing isn't awful, either, he just hasn't been trained like so many people who are raised in the church). Kristi reported that, indeed, it was noticeable when Hunter didn't know the words, because that was the only time he couldn't be heard as the children sang.


In other news, Dean left this afternoon for Fort Eustis, VA (several hours away). He will be attending a "Serve Safe" training through Wednesday, then travel home Thursday. It's kind of funny (to me) that the vets oversee food inspection (much like health inspectors) for the military. I learned a lot of this kind of stuff in my college coursework for nutrition, but not nearly as in depth as he has. He's had lots of training in it in the 14 months he's been in the army.

Since he never reads the blog, I'm safe to say that it is actually a nice break occasionally to have a little mini vacation of my own when he's out of the house for a few nights. Then I don't have to worry about respectable dinners (who wants cereal?!) and having bananas constantly in stock (hehe) and can waste away my nights doing whatever, then hog the whole bed to myself (and Baby). Of course I'll miss him, and be glad when he's home.

On a side note, he was supposed to have deployed yesterday to Iraq for a year. I was well aware of that yesterday, and he mentioned it today as he left. Whew, that was a close one! Though it could still happen if he stays in the military. His knee/torn meniscus, the reason he's not being deployed, is still in bad shape. He goes to physical therapy which is supposed to keep the muscles built up around the knee. Apparently they go quickly with knee injuries. At his last appointment with the orthopedist, he was told it would probably need surgery since it's not healing. If he walks much, or especially if he uses stairs, it swells and hurts. He does his situps and pushups and uses an elliptical to work out and keep up that sexy army figure and his weight down since he can't run.


One thing (of many) I've resisted buying for the boys until recently has been light sabers, you know from Star Wars. It seems everyone has them. They looked like just another big whacking stick (as we call such objects) for the boys to beat eachother and the house with. But of course they've always lusted after them and enjoyed them at other people's homes. So, dearest Heidi invited Hunter over for a showing of Star Wars Clone Wars with Lincoln and other friends, and light sabers were welcome. So, without telling him, I got one for him, and he was delighted to use his allowance/birthday money to buy it from me. He's actually been protective of it (meaning he doesn't want Kyler to break it), and makes a point of not leaving it outside, which is notable. The first night, Kyler ended up with a bloody nose and cut lip. Hunter didn't mean to do it, but that's what happens when boys have big whacking sticks. I asked him what the consequence should be, and he said I should take it away for a week. That sounded reasonable, so it went high up in my closet. The next day I found the step stool in my closet, but alas the little people (namely Kyler) still aren't able to reach, even with a step stool, so there it stayed all week. On the appointed day, I put it up on the grandfather clock in the living room, which holds many confiscated items, to see what would happen. I didn't say a word, but Kyler's awfully keen and soon the step stool was next to the grandfather clock and the light saber was gone. They've been enjoying it since, and Hunter even shares it.

I also broke down recently and let the boys buy (again, with their own funds, to help them appreciate it more) a used game cube and a couple of games. I have always vowed to never have such things in my home. I don't intend to raise video game junkies. But, I thought it would be a good motivator, and it is to some degree (not as much as I had hoped). I keep it in my bedroom so I can monitor it well. They haven't seen TV in quite a while, as the cord I detach from it when they lose the privilege is in a nice safe place right now, unbeknownst to us all :)

I'm throwing in some gratuituous and irrelevant pictures since this is a long, boring post and I get complaints when there are no pictures:) The first one highlights Kyler's photography skills, Hunter being the subject. For some reason Kyler feels more secure being naughty under the couch (if he gets hold of my camera, he'll go under the couch and take scores of useless pictures - this being a better one). He also goes under the couch to eat contraband candy if he has climbed into the cupboard or on top of the fridge to get it. Then he throws the wrappers on the floor under the couch. 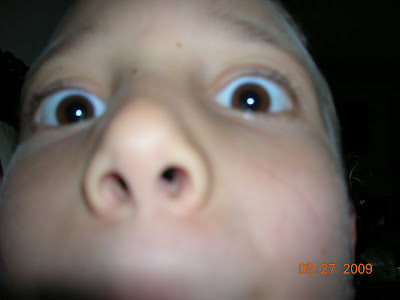 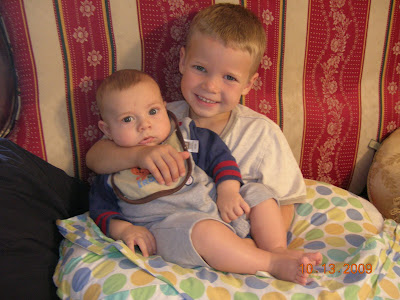 And here's the illustrious Kyler trying to finish his sandwich at Arby's so he can have some beloved french fries. 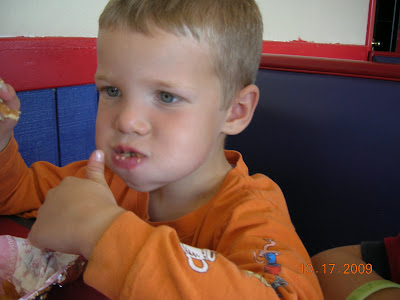 Posted by Living Lavallee at 12:35 PM

Well, I just happen to like reading all of your "mundane" stories. I find them pretty darn humorous:) Glad Dean didn't have to ge deployed yesterday! Although I can see where being away from them occationally can be a mini vacation:)

Oh and I hope you feel better.Jared's sister got the swine flu and was horribly sick with the fever(104.2) and other symptoms. Luckily we have not been sick.Hopefully it stays that way because we will finally have inurance in about a week!

I'm sorry you guys are sick!! Connor has been sick already, and it is SOOO hard to watch. Poor little guys! Hopefully Tristan will get better soon!

Cute pics, too. Hopefully it's a digital camera, so the "waste" of pictures isn't a burden. :)

It is a digital camera, so not a big deal.

At least Hunter is SNEAKY about the candy wrappers. My boys blatantly drop them everywhere and help themselves! Little punks. :) Cute pics! Love the stuffed face full of Arby's!

I too enjoy your 'mundane' funny stories and cute pictures. I feel terrible about Dean's knee. Should never have happened. Hope you're feeling better--flu is no fun. I keep supplies of Vit. C, L-lysine, Vit. D3, Zinc, etc. on hand whenever Frank feels he is 'coming down with something'. It works every time.