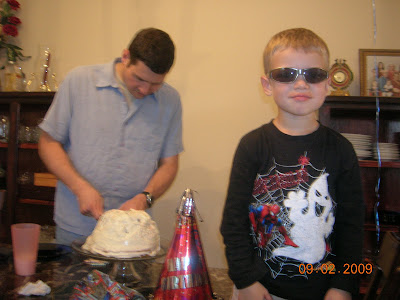 Until very recently Kyler was unable to say the "k" sound. He couldn't really even say his own name. When people would ask what his name was, he would always say "Tyler, with a tay". I think my mom worked on it with him while she was here, or at least that's the story Hunter tells. Kyler said some funny things all this time, such as "tards" for cards. It was cute, but I guess he's growing up - he turned 4 yesterday after all. He never really knows how old he is, perhaps because he doesn't know what that means. For the longest time when people asked him how old he was he would say "six and a half". That was long before Hunter was ever six and a half, so I'm not sure where he got that. Now when people ask him, he asks me. 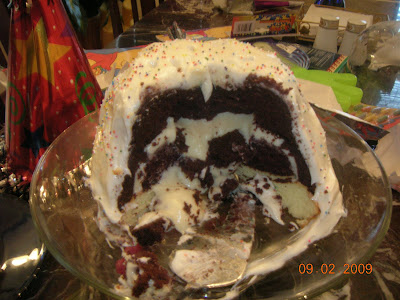 So yesterday morning we told him it was his birthday, and he said "I know". He always "knows". So I took him to Dean at work while I did a little shopping to get him a few things, and he and I made a birthday cake for him. I used a fun pan set that Penny gave me with which you can make a filled cake. I had pudding mix on hand, so that's what I used. I had to use two cake mixes to have enough batter for all the layers. I didn't realize that I was nearly out of powdered sugar, so I had to borrow some from Kristi to make the frosting - thanks! Kyler put the candles on the cake himself, so there are a few extra. Hunter has uncontrollable urges to blow out candles, so I had to hold him back so Kyler would have a chance. 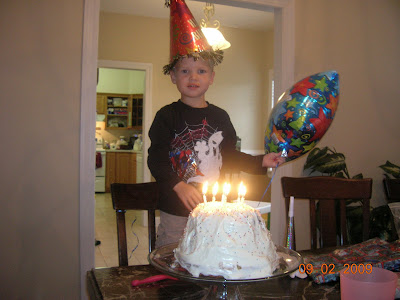 Posted by Living Lavallee at 11:43 AM

Happy Birthday Kyler! You had a very yummy looking cake, you have the best parents! It's so fun when the kids learn their sounds correctly- yeah for progress! oh, btw... the website for coupons, I signed up on www.vocalpoint.com and I get coupons for free boxes of cereal and you can print from their website as well.

Yeah! Happy Birthday and congrats on being able to say your name:) That is a good looking cake. Mine probably won't be that good but you will have to watch my blog to see it.

Happy Birthday Kyler - that cake looks DE-Lish!! I love that you just used what you had on hand for the filling. One of the many things I love about our Becky!! You always make me think! I just love that about you!!!

So where was my slice? Well, a guess calling someone a tard and a card do mean two different things. A lot of kids have a hard time with the K. He's such a sweetie. I'll never forget that nighttime hug.

Happy Birthday to Kyler! what a fun cake to make!!