An Acronym for Everything 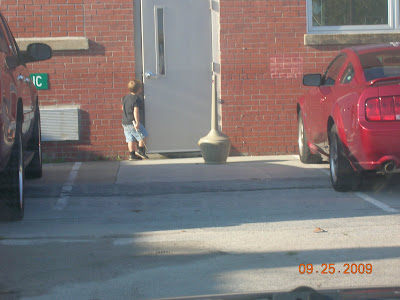 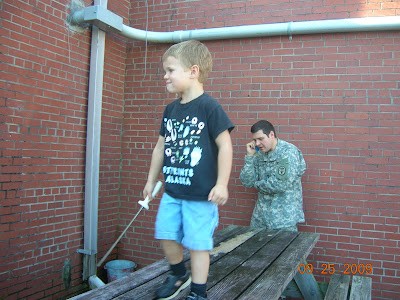 So this morning as we were eating breakfast at 7:30 Dean mentioned that their unit was traveling to Wilmington, NC to see the battleship North Carolina, about an hour away. It is called a "Staff Ride", basically a field trip to foster camaraderie. I didn't have anything going on today, other than feeding the missionaries this evening, so I asked if I could tag along, which he said would be fine. I managed to get showered and get the boys ready and to the base just after 8:30. Civilians can't ride in the "GOVs" (government-owned vehicles), so he rode with me, Kyler and Tristan in our "POV" (privately-owned vehicle). Before we left I asked in jest if he would be embarrassed to be seen with me since I still have a bit of post-baby weight to lose. He laughed and said he had just learned a new term, a "CD". That would be a "chubby dependant".

In the first picture, Kyler had his "sword" - actually a honing thing for knives, not sharp or anything, and was waiting for a victim to come out of the back door at Dean's work as we waited for everyone to be ready to go. Then Kyler moved on to table dancing in the next picture, as Dean conducted some official business on the phone while a computer dude was working in his office. If you're concerned, Dean is in a "no cover" (hat) zone there. When they are outside they are required to wear cover when in uniform, but they pass from one part of the building outside then inside again to another part of the building... and don't have to wear cover or salute there, since they go back and forth all day... Kyler did actually poke the Sergeant First Class with his "sword" (who took it in stride), at which point Dean confiscated it. 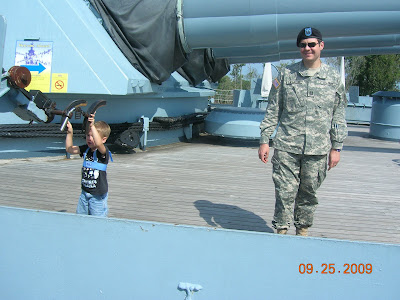 Here are Kyler and Dean on the deck of the USS North Carolina. 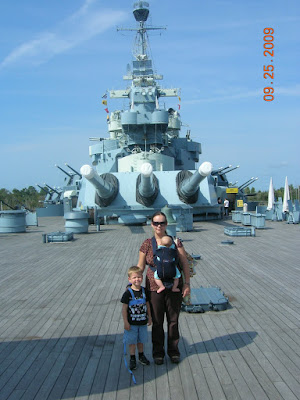 And Tristan was an angel the whole time! Afterward we all ate at Sticky Fingers, a barbecue joint. I had a potato stuffed with pulled pork and topped with melted cheese - yum! Dean rode back with the soldiers; I had to rush home to meet Hunter from the bus.
Posted by Living Lavallee at 6:32 AM

Looks like a fun outing! It's so fun when you can be with the hubby for "mandatory fun" ;) Gotta love the military for all the acronyms...can anyone just say what they mean...I get so confused, plus having to learn all the text message acronyms...I think I would have been better as a pioneer!