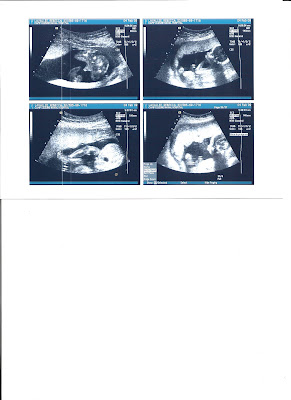 Boy! Another boy. I figured as much. But we're excited. I can hardly makes heads or parts of some of the ultrasound pictures, but here they are, and apparently one has the identifier. Baby kept his hands pretty close to his face much of the time. We may end up with another thumb sucker/ear caresser like Kyler. Hunter sucked on a bottle until he was three, and held his ear (or mine or Dean's) all the while. When we finally weaned him from the bottle, he stopped with the ears. There's no taking Kyler's thumb away, and it doesn't bother me yet anyway, especially since it is so soothing for him - he can go from screaming his head off to nary a peep when he pops it in his mouth and works that ear.
I've been just dying to buy foofy little girl Christmas dresses that are marked way down right now, but have been holding off until today. Alas, I won't be needing any!
I texted Dean, who is out in "the field" again this week, and consequently isn't supposed to be using the cell phone outside of the tent, which they are only in at night. He texted back saying "Great, a future missionary!"
When I was pregnant with Kyler, I ate like a piggy and put on 40 pregnancy pounds (Kyler included). It was difficult to lose! With Hunter I had lost all 20 pounds and then some in a month (he came 7 weeks early, so I didn't have the opportunity to gain so much), so I assumed it would be easy again. Anyway, I was terribly swollen all over with Kyler. One day I happened to be at the post office, and a lady who worked there said "oh, you're having a boy". I was indeed, and asked how on earth she knew. She was a bit reluctant, but said "It's your nose". So I went home and looked in the mirror, and sure enough even my nose was grossly swollen. So this time around I'm being more careful and trying to not gain excessively.
So in "the field", Dean and all the other folks (nurses, MDs, PAs, dentists, scientists, lab techs, etc.) are going through the motions of what the enlisted soldiers have to master. They went through the obstacle course last week. Yesterday, they went through a mock Iraqi village looking for bad guys, and did combatives. They really want the women to learn to defend themselves, so they pair them up with men to practice. He says he sure has developed an appreciation for all the training and skills that combat soldiers have to have in order to do that every day. They've also done the gas chamber now, where they get gassed, so they know what it is like and how to deal with it. It was most awful, I'm told, but over quickly.
Posted by Living Lavallee at 6:29 AM

congratulations! it looks like things are going well. So when is your due date?

Thank you! I've been watching my nose, and haven't detected any swelling yet, but there's still plenty of time. The due date is June 26th.

Exciting! 3 little buddies to play and wrestle with!

Congrats!! Starting your own little army there! Hope the pregnancy goes nicely. (if that is even possible)

Congrats on the new little boy! Send us your address and we will send you a gift. my wife loves to buy baby stuff and loves to spend money as well so I'm sure she will be more than willing to pick something up