After several weeks thinking that there was no possible way he could ever put his shoes on the shelf in the entry way, Hunter finally made up his mind to do it for the required 30 consecutive days, and now is delighted to finally have the glasses he needs! He knows that he'll be buying the next pair, so here's hoping he takes this new-found responsibility seriously.

Now that the countdown is on, there are a few souvenirs I would like to take with us.  We are over our total weight allowance, however (storage + what we brought).  We actually brought less than was allowed here, but as always have accumulated more stuff, especially with having a baby girl.  Not sure what to do.  This coat tree is actually from Indonesia, and I strongly suggested it as an anniversary gift from Dean :)  Yep, we celebrated 12 years this month, and we're only getting better!  We went on a date and had a Dr. Fish treatment, where these toothy fish eat the dead skin off your feet.  It was delightful!


Our Lady Cambria is one hungry girl.  At her 9 month appointment last week she was down to the ~60th percentile for weight, from the ~90th at 6 months.  It's okay, but maybe she's not getting enough to eat - Dean thinks that may be why she seems more desperate and fussy lately.  Of course she is more active with all the crawling...  I've fed her more real food than any of the others at this age (tried to stick with just nursing as much as possible through 12 months to help avoid food allergies...), but she's always been big and hungry!  So more real food it is.  I actually gave her what Tristan didn't finish of his peanut butter sandwich yesterday (I know, cringe), and she ate it up.  She chews at the front of her mouth with all those teeth.  Kyler is still her biggest fan of the boys, and loves to ride around on Tristan's trike here in the apartment - they all do, even Hunter.  They also go 'round and 'round on the scooter.  We'll be happy when the weather is warmer and we have OUR OWN YARD again!  She does not like strangers, even kids.  She is a noisy handful now at church as well. 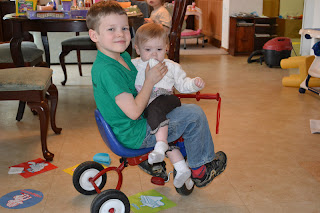 The pinewood derby was on Saturday.  Getting Hunter to work on his car, or rather find all the parts to it that got thrown around, was like pulling teeth.  So I told Dean (and Kyler) to go ahead and go on the bass fishing tour they were interested in, where it was rainy and cold and no one got a single fish, sadly.  Hunter's car did as well as the effort he put into it, but he was delighted to get an award for the Best Stock Car. 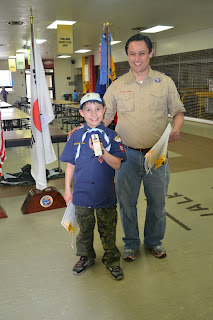 Tristan's stubbed toenail from months back is still discolored. 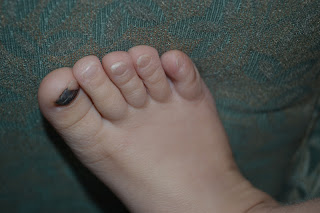 Tristan has been waking in the night a lot lately, often hollering, or wandering into the boys' room (so they've been locking their door).  Somehow it usually doesn't wake Cambria.  But it can make for a tired and grouchy boy in the day.  He was fast asleep here, and I woke the drowsy Dean as well - oops!  I wonder if he is having night terrors? 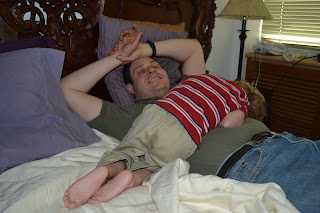 We had Bunny Beatrice for about six months, and have been concerned about what to do with her when we leave.  Saturday, a couple with no children inquired about her, and we made the match.  She'll get lots of holding, and no chasing.  Kyler is the saddest to see her go. 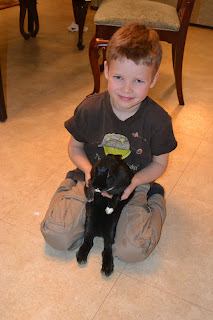 There was finally an opening for Hunter in Taekwondo.  The people who run the children's extra curricular activities are trying to make it as difficult as possible for us since he has mild hemophilia.  They harassed Dean into a meeting with about 8 ignorant bureaucrats.  As his parents who know all about his condition and have been dealing with it for all nine of his years, we made the judgment that at this level he will be fine until we leave.  He spends the day sparring with his brothers at home, after all, so this wouldn't be any worse.  We are sure looking forward to not having Uncle Sam breathing down our necks when we are done with the army, though Dean will still have four years in the "Individual Ready Reserves" after he gets out, which means that they could call him up at any time and deploy him, but otherwise he will be done.  The chances are slim that that will happen at this point, but still looming since anything can happen at any time, and there is always unrest overseas.  Hopefully Hunter will be able to stay in TKD, as we have to get a doctor to sign a letter saying it is okay.  The doctors at the army hospital won't, since they don't know anything about it and refuse to learn. 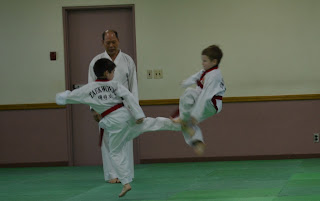 In class the other day Master Kim tested the kids and had them spar, all in preparation for advancing.  Kyler will be testing for black belt in May.  Kyler, currently a red belt, sparred with another red belt, and then moved up to the next opponent, yet another red belt. 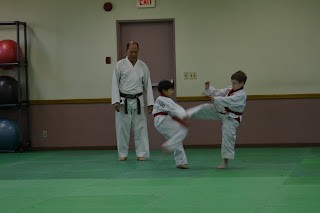 There were no other white belts for Hunter to spar with, so Master Kim paired him with Kyler.  Since Kyler is a red belt, he respected the rules and did not kick Hunter at all, only defended himself.  Hunter took advantage of that and was on the offensive the whole time, basically chasing Kyler around the room. 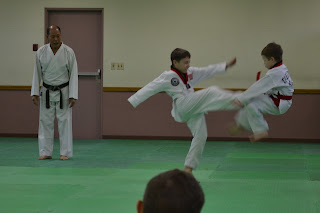 The boys have been losing teeth like crazy lately.  The tooth fairy in these parts apparently has Alzheimer's and can't remember to come around.  Hunter reminds us repeatedly, sometimes to no avail.  Poor Kyler had the misfortune of three coming out at school, so his teacher took them, saying he would give them back in a little box, but instead lost them all (all on separate occasions).  Kyler thinks his teacher must take the teeth home for himself to collect from the tooth fairy.

I should really get to work!  My agenda for the day, besides the usual, is to try to finish the Hunger Games, for book club tonight.  Since I only started late yesterday, it's not likely, but I'll at least not be completely in the dark.  Have a lovely week!
Posted by Living Lavallee at 10:26 AM

Seriously, how do you lose a kid's tooth, as a teacher, THREE TIMES?!!! Especially Kyler's teacher, who is so completely.....well, you know;)

Gavin had night terrors between the ages of 20 months to about 3 years old. Actually he still has them a lot but he can sooth himself now(most of the time). I really tried to not let him watch any major or even minor violent movies. However I know that he also had night terrors about the vacuum so good luck with trying to prevent them. He will grow out of it sooner or later.

I had no idea that Kyler and Hunter were in Tae Kwan Doe. Maybe I knew but forgot. Why is Dean going to be in the Ready Reserves, or whatever. When did that happen?

When one joins the army, one is signing up for an 8 year obligation. Since Dean will have four years of active duty, his next four years will be in the IRR. Pepe got out of that because he was medically boarded out of the army; otherwise the same would have applied to him.

Your blogs are always interesting and fun to read. Good luck with the packing and getting ready for the big move. Do you know where you'll go? The boys look great in the TKD pictures!