Will Work for Donuts

. . . will poop for chocolate.  Tristan is virtually 100% for peeping in the potty and not having "accidents" in bed.  But for some reason he chooses to do the dirty deed in his pants occasionally.  We've been offering chocolate chips for choosing to do it in the potty, and that helps.  On a different note, he loves to go modeling, because that means he will get donuts.  He will devour three or four per session.  I let him, as that is the only time he gets donuts, and it is his incentive for "working".  The kids, mostly Tristan, have earned half the cost of a mission at this point.
Dean finally said the other day that at this point, there isn't anything in particular holding us back from buying the practice outside Seattle and moving there, and he even feels peaceful, if somewhat apprehensive, about it.  I am still cautiously optimistic.  It is a dreamy place to live for us - with warm but not hot summers, cool but not excessively cold winters, a smaller town (several thousand) near a big happening city, water everywhere, little to no humidity and only half the rain of Astoria, OR.  70 inches was a bit much in Oregon's rain forest, but half that would be great!  My dream is to build a house, using Ubuildit.  I spend way too much time looking at house plans online.  I'm attracted to the ones with real laundry rooms (big enough to double as a sewing room), walk in pantries, adequate closets, bedrooms bigger than a closet, jack and jill bathrooms - all on the main floor (especially the master bedroom), apparently a tall order as such is hard to find.  We would love to have enough land to have a cow - or maybe goats again, and all the fruit and nut trees we could handle, not to mention chickens and a garden, and room for the kids to roam and forage.  All I've ever wanted since Dean finished vet school was to settle down somewhere and raise a family.  We are looking at our sixth move since he finished school.  But if he is buying this practice - it will be the last for a loooooong time, if you don't count moving into a rental or whatever until we can build or buy (at least that would be the same area).
Now that it is April, Kyler is eligible to go to the park again and has been spending hours there.  He happily goes to bed when he plays there, as he is worn out!   Early in March he was calling other kids names and picked a fight with a 12 year old kid from church.  So he lost his park privileges for the duration of March.  I think he is minding his Ps and Qs now. 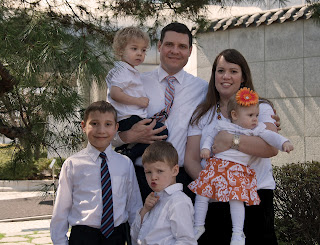 Today was busy, with a district primary activity for the kids at the chapel on the temple grounds, as well as our district temple day.  Notice the Korean shingles on the back side of the temple.  Kyler attended his friend Cade's birthday party - while the rest of us went out for some Korean food.  I got my dolsot bibimbap fix, which I've been craving. 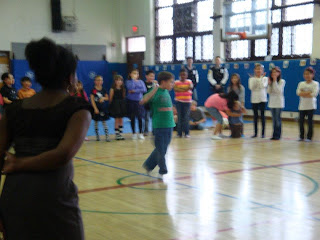 The school had a fourth grade sock hop which Hunter attended recently.  He got an award for being such a wild dancer.  That's him in the green shirt. 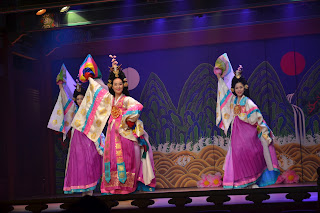 Dean and I had a lovely date recently - dinner and a show.  It was at the Korea House, having a dinner that would have been served to the royal court, which consisted of tiny tastes of many different foods.  They were all good. 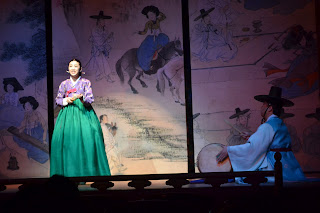 Then we went to the show.  It was every bit as beautiful as ballet or any other music or dance form. 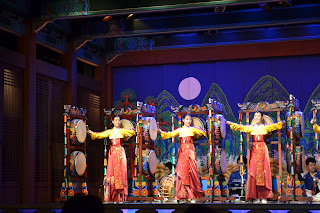 They were all highly skilled and practiced.
We loved every minute of it. 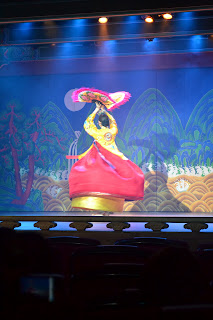 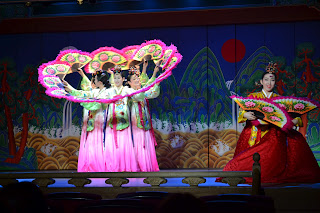 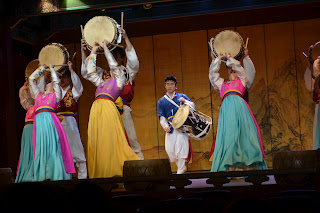 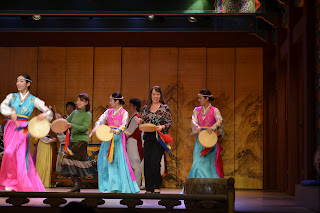 I was stunned to be pulled up on stage to have a brief lesson with these beautiful ladies. 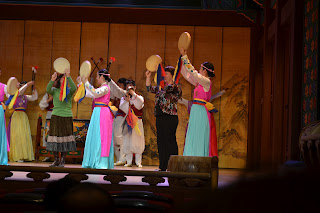 I'm the out-of-place one above on the right; the lady in the green top was also selected. 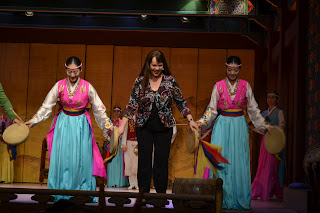 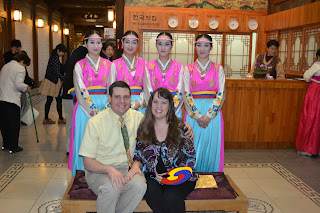 and I got this fan that I'm holding for doing it.  I love dates! 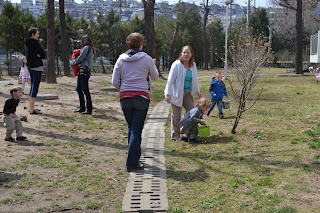 I sort of hosted a little Easter activity for the ladies/kiddos from church, or the pre-school aged ones at least.  Sadly, Tristan came down with pinkeye the day before, so I got a neighbor/friend to open up her home to it that morning (whew - what a lifesaver!), but brought Tristan out to hunt for eggs at least; he has the green bucket in the center. 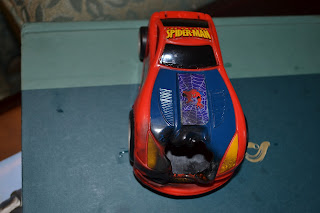 On Friday I was burning a scented candle to mask the smell of a ceiling repair, and happened to look over at Tristan just as he was holding this car over the flame.  It caught fire.  Not much later Hunter (9) came along and lit a napkin up.  Hello!?  What are you thinking, Boy?!  Then Kyler decided to take a turn and got a tissue from a box nearby and wafted it over the flame, also lighting it.  He freaked out and let the burning tissue fall to the floor.  I told him to stomp it.  He's really good at stomping from all that bug stomping as a toddler.  It singed the rug and left a black mark.  I swear these boys will be the death of us.  Tristan some time ago nuked a motorized car in the microwave.  The car was never the same after that, but the microwave was unhurt.  It's never dull around here!
Happy Easter!
Posted by Living Lavallee at 9:53 PM

"Will work for donuts....will poop for chocolate." HAHAHAHAHAHA, Love it!;)

Such an interesting post with all the various happenings with you and your kiddies. Hang in there. Don't let them burn down the housed--bet it really smelled good after the plastic toy burned!