There and Back Again

Always such relief when Dean comes home.  He was quite due for some continuing education, and he even took a course (that he had to pay extra for) on acupuncture.  He's not sure that he will ever use it, however.
He visited his brother in Portland, OR, lovingly known as "Bro" or "Uncle Bro" around here, as well as Bro's lovely bride, "Aunty Patty".  Years ago I overheard Hunter and his cousin Isaac having a discussion about whether  he was "Uncle Bro" or "Uncle Dro".  Good stuff.  The "Bros" went to the traveling Body exhibit there, which Dean took the older boys to see here in Seoul as well.  He also checked out the Seattle area...  then went on to New Mexico.  Pancho, his beloved Blue and Gold Macaw, pulled his usual trick of turning violently on Dean's mother as soon as Dean walked in the door, just as Pancho did when Dean returned from his mission.  Shame on Pancho. 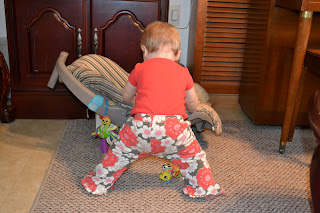 This party girl makes her way around more all the time, and pulls herself up to stand.  She now sleeps in Tristan's room, and it is working great, so long as they go down at different times.  Naps are more complicated, but otherwise we're thrilled to have our nights and sleep back! 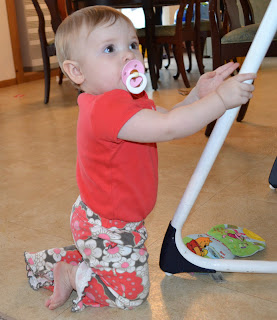 She has 10 teeth now, at 8 months.  All the kids have gotten their teeth rapidly. 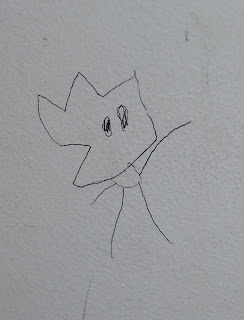 We have artists among us.  They believe that the world is their canvas. 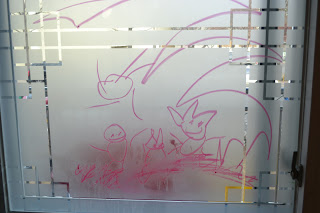 Windows are much easier to clean than walls. 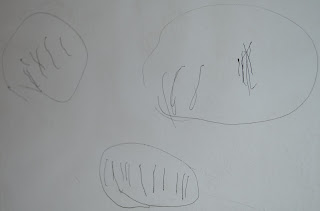 It is remarkable, compared to the older boys at least, how well Tristan speaks.  He started off calling both Hunter and Kyler "Dada".  That has evolved to "Lala", "Laler", and finally yesterday for the first time "Kyler".  He still calls Hunter "Hot-dar".  Today he actually called the baby "Cam-ia" for the first time.  She has been "Baby".  He often speaks in sentences, and is easily a year ahead of both older boys at this age.  Having olders who speaks surely helps with that.  Tristan has been a little jealous of Cambria lately, I think because she gets up and around and gets into things, such as his toys, my lap, etc, and seems less like a baby and more like competition.
Hunter did a self portrait in 3-D at school.  The nose is a few inches long.  The resemblance is uncanny. 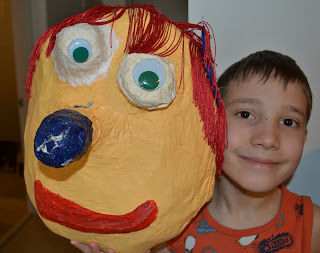 I measured the boys on a wall hanging we've been using for a few years.  Tristan is 2 1/2, so if we double his current height, the thinking is that that will be his adult height.  He is right at three feet, so potentially he could be six feet.  I didn't know to do it with the other boys.  Kyler is currently taller than Hunter was two years ago; they are exactly three years apart.  Poor Hunter has always been on the smaller side, starting at four and a half pounds.  He asked what he could do to grow taller faster (he really doesn't think much of the idea that Kyler *will* outgrow him, and Tristan - maybe even Cambria?)  I said all he can do is hold his head high and shoulders back - no slouching. 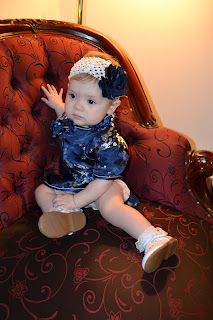 This little Asian-style dress is for a two-year old, but hardly covers an infant.  She probably won't wear it again, sadly.
Our exciting news that may or may not be is that Dean and a partner, a veterinarian that he once worked with and gets along wonderfully with, have been looking for months for a practice to buy together.  This is huge for us!  Emotions have been up and down here for months as they have pursued multiple clinics, and even began working on the possibility of starting one.  It is a sellers' market right now, so they are hard to come by, or at least bigger ones that would support two owners.  A fabulous one came up for sale recently in the Seattle area, but far out enough that it is a smallish community.  This would be dreamy for us in every way.  The only drawback is that it is so far from family, except for Bro, who would still be a few hours drive.  Out of four offers put in for it, "we" were selected, but still have a number of wrinkles to iron out, some of which could be deal breakers.  I, at least, am on pins and needles (and knees) hoping that it goes in our favor.
Posted by Living Lavallee at 12:50 PM

We always love the pictures!

Good luck! Sounds like lots of fun and exciting possibilities though :-)