To Catch a Shrimp 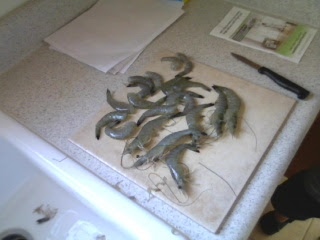 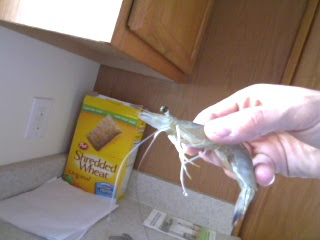 So being a government employee now, Dean got a luxurious four-day weekend for Labor Day. We decided to fly Hunter out to be with him now as well, since school had already started there in Jacksonville, NC. The army paid for the ticket (we had to pay the $100 unaccompanied minor charge, but that's ok) and Hunter flew nonstop to Charlotte, NC. Dean had to drive the 240 miles to pick him up. So Dean took Hunter shrimping today, and they had success! He was frustrated here in Astoria as he never could seem to catch anything, (clams, crab, fish - all eluded him here). So of today's catch, he said they were the yummiest shrimp he's ever had (he fixed them up himself) and, naturally, Hunter didn't like them. That's our boy!
Posted by Living Lavallee at 12:26 PM

I went shrimping with Ron two memorial days ago... We cooked the shrimp and ate it, but I never liked shrimp since then. It's not quite the same when you see the whole process: live shrimp, caged shrimp, be-headed shrimp, de-spined shrimp. gross! But congradulate Dean for me anyway! :)

It takes a lot to gross Dean out, and he loves fishing and all that. When we were first married he would bring home fish that he had caught. Just the idea to me that it was newly dead totally freaked me out. I'd be screaming and jumping around while I was trying to prepare it... He of course always has to necropsy (autopsy) it.