I can scarcely believe how long it's been since I've blogged.  Life seems to get busier by the day, though I seem to have less and less to show for it.  We took a trip over the Veteran's Day weekend to Jeju-do, Korea's version of Hawaii.  It's a beautiful island only an hour's flight from Seoul.  We rented a car and tried to see all that we could in three days. 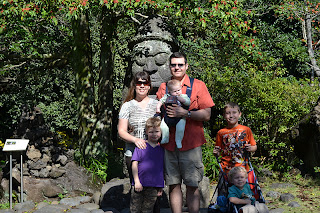 Guardians, as pictured behind us, are everywhere on the island. 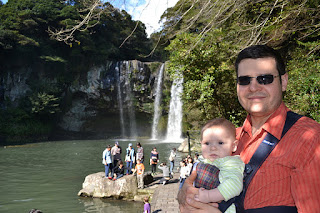 I would rather see natural wonders than amusements any day, so we saw a few waterfalls. 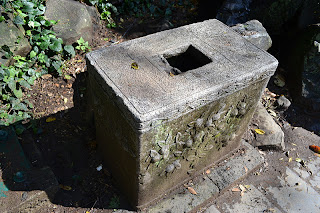 Here is one fancy trash can. 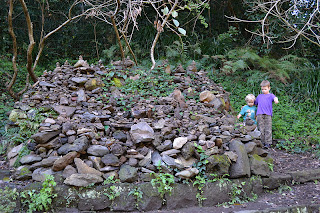 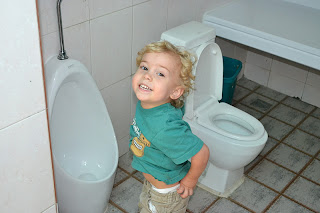 There are tot-sized potties all over Korea, which is handy for the trainee.  He was pretty good at Jeju about using the potty.  I must say that he has been the most difficult one so far to train, just because of his defiance. 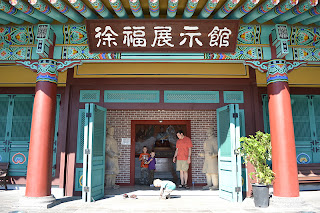 Here is a Buddhist visitor center of sorts. 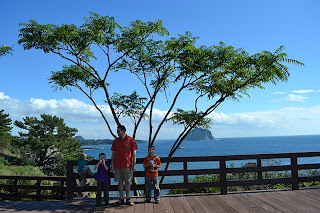 The weather was just beautiful most of our trip, and there were smaller "islands" out yonder.   I love the new camera! 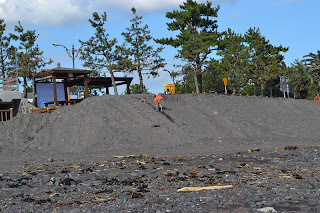 A beach of black sand.  Sadly, Kyler tossed his beloved wallet along some rocks for "safe keeping", then forgot to retrieve it when we left.  We went back later in the day and it was long gone.  Fortunately, at my mom's behest, I had removed most of his money from it some time before. 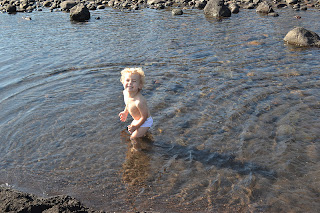 Tristan was down to his skivvies in no time. 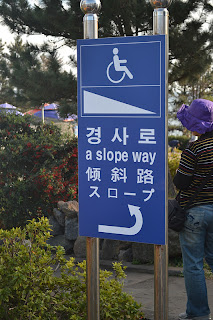 There is no shortage of great signage. 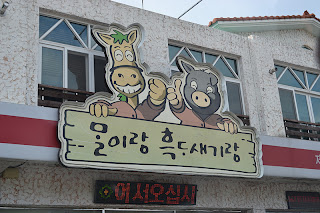 You can tell what is on the menu by the animals pictured.  I bet that horse and pig wouldn't be grinning if they knew their purpose.  No, I had no intention of eating RAW horse. 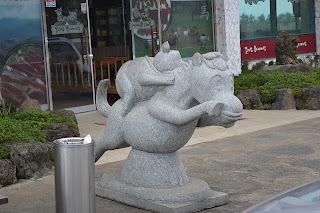 But I was all about kimbap since I made a valiant effort (once again) to go gluten free.  I easily passed up many a wheatish delight on the trip.  I've since fallen off the wagon with so many Christmas treats abounding at tree lighting ceremonies and Christmas concerts, and home baking.
and 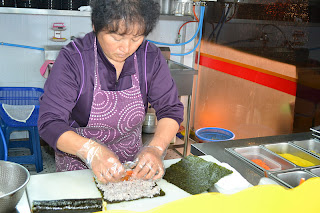 This would be Jeju Pork Bulgogi.  Not nearly the same as the typical Bulgogi on the peninsula. 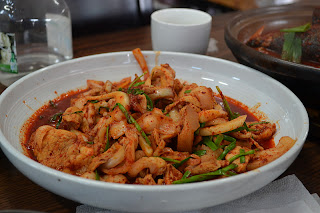 Kyler got to watch Dean and Hunter ride a go-cart, since he just couldn't muster much of any good behavior. 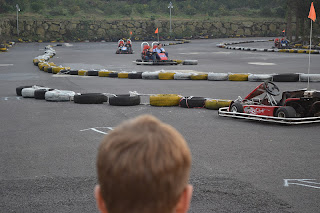 We've come to realize that "Family Vacation" is the worst of oxymorons.  It's not any sort of a vacation with the family along.  But Tristan's good looks help to redeem him. 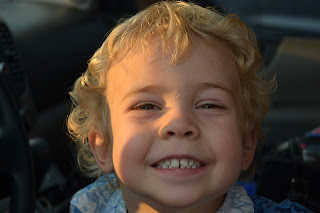 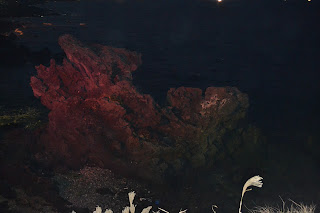 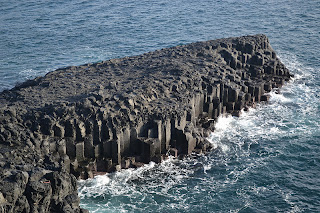 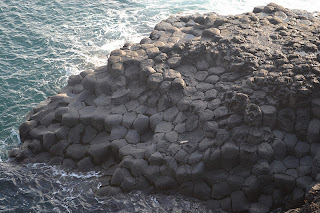 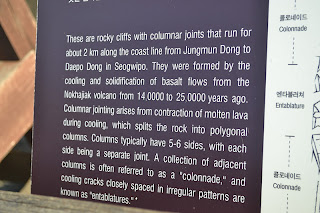 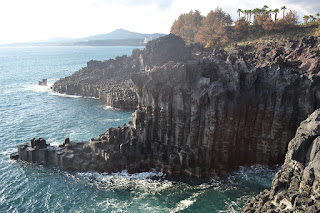 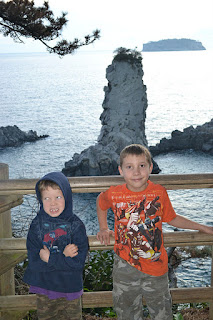 Mandarin oranges were in season, and we saw millions and millions of them on the trees.  The hotel had a few trees, so I sent the boys right out to harvest them :)  I must have eaten 20 a day or more. 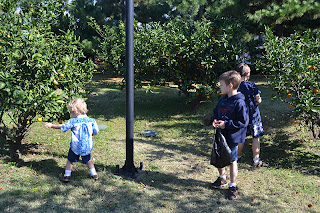 The hotel was really nice - too nice for us.  Of course, the nicer the hotel, the less you get (internet was $20 a day, so we declined, for instance).  But they had a lovely pool area, and much more to see.  We forgot Cambria's pacifier which was a disaster the first night.  We quickly bought one the second day, which much improved the situation.  They provided a "crib" for her in the hotel, which was more of an old fashioned (but new) play pen.  Kyler and Tristan slept together in it, and Cambria slept in her carseat.  Hunter got a whole bed to himself, and a sofa went unused.  If we had stayed in a less expensive hotel, they would have required us to use two rooms. 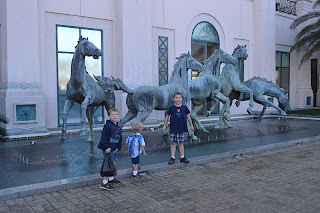 We actually hiked part of the way up a volcano.  Tristan was the hindrance, but did surprisingly well once we realized that he would walk if we threatened to take away his beloved "green car", which he is holding here.  Otherwise he thought Dean should carry him up. 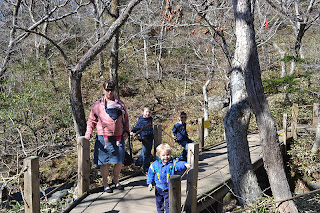 I just can't get over the horse eating. 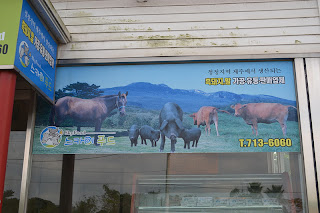 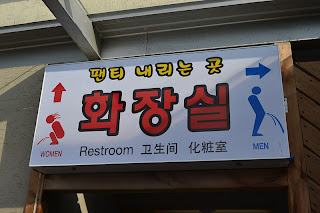 Ever had mackeral?  It's one yummy fish.  It was all spiced out here, but it's best in its more natural state. 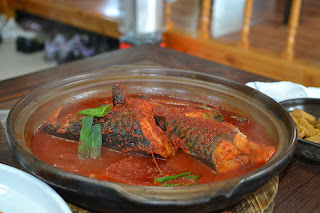 It was really nice to get away for a few days, especially since we really haven't done that here with the kids.  Dean has decided for sure to get out of the army, so if we move close to "home", we'll do more real vacations (sans children!)  I'll post more soon, hopefully - the adventures never end!
Posted by Living Lavallee at 9:44 PM

I loved this post! Your new camera takes great puctures. I agree though that I am more tired AFTER a vacation with kids:) I LOVED the potty picture...hahaha hilarious! ! Glad you got to get away for a few days:)

Love all the pics. I don't know if we'll ever get to Jejudo or not:(

What a beautiful place for a family vacation, nice pictures. Good for you for having the patience to take the kids.

What a beautiful place for a family vacation, nice pictures. Good for you for having the patience to take the kids.