The tongue has made a comeback, and Baby Tristan is getting more wild by the day, but he is still as cute as ever.  Throngs of people ooh and aah at him here whenever he is out in public.  Koreans love babies, especially cuties like him. 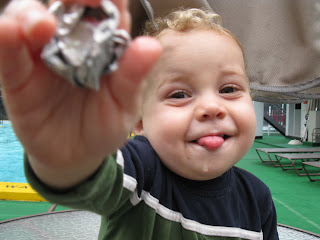 My attempt at making chipotles didn't go too well.  I basically warmed them in the oven for a couple of days, and they didn't change much.  So I cranked up the heat and really smoked 'em.  Not sure that they are good for anything now, but I haven't the heart to throw them out yet. I even tried to buy some on amazon, but whoever was selling them wouldn't ship APO. 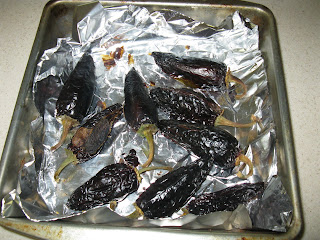 Hunter and I got to take a new comers' orientation tour courtesy of the base here, so they drove us around the base on a bus and showed us all the amenities.  Notice the curtain, which is common on private buses (not city buses). 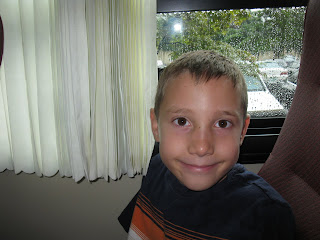 Then they took us sight seeing, and we went to a "traditional" Korean village, which are rare now, although there are apparently still a couple of real ones left in Seoul.  This one is more like a museum.  This guy is weaving baskets and other such items. 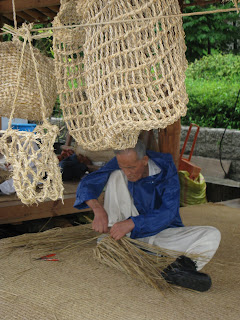 Army community services provided free childcare for Kyler and Tristan, which made going on this tour possible.  It was nice to have an outing with just Hunter Pants. 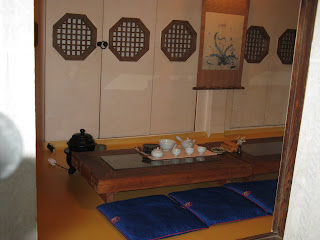 This is a view inside one of the rooms of the traditional house.  They had a state of the art heating system from way back that heats the floors, where they sit and sleep. 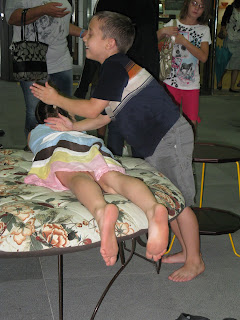 Hunter is still always a ladies man.  I'm not sure how this came to be; he's chopping her back.  I noticed it and managed to snap a picture.  It was innocent.  She gave him a treatment soon after. 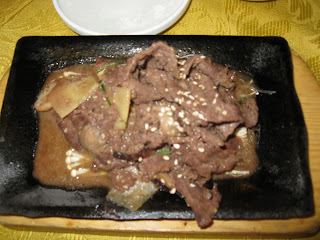 Next they took us to a traditional restaurant with yummy food.  Everything was paid for by the tour.  This is bulgogi (I'm not sure if that's spelled right), and it is delish.  I must confess that I have started to like Kimchi.  I never imagined that that would happen!  Apparently like yogurt, it is full of the good bacteria, and studies have shown that thin people (like most of the Koreans) have more of the good stuff, whereas overweight people tend to have more of the bad bacteria going on.  I actually bought some Kimchi at the commissary today to start including in our diet.  I may even be brave enough to start making it.  There are many varieties, some better than others.  I've only found recipes for the spicy cabbage kind. 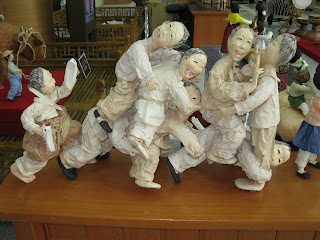 Next we toured more museums and saw interesting artifacts, such as this artwork. 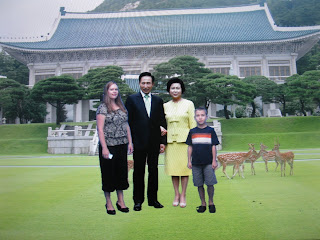 Then we had our picture taken with the president and first lady at the Blue House.  And Hunter got to participate in a U.N. meeting, representing Brazil.  It was a fun day. 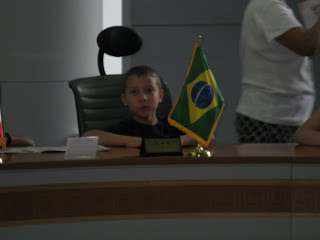 Dean returned from the exercise on Thursday, and has slowly been helping us dig out of our stuff. It's starting to look like a home, and today we even managed to clear a path through Kyler's room. 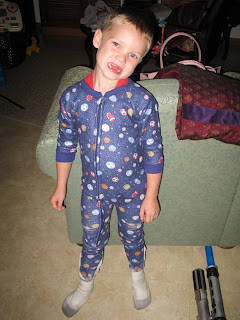 Part of the mess of his room was that I had put a plastic storage bin of size three clothing, that Tristan can wear in a couple of years, in Kyler's room.  He has more closet space than he needs, so I thought it could go in there.  Instead, Kyler tossed it all about the room, and has been wearing some of it.  He is still obsessed with socks, and wears them 24/7.  I had cut the soles out of these pajamas, partly to rile up Kyler, obviously some time ago (when he was wearing a size 3, probably at age 3).  There were holes in the soles, and he insisted that I patch them.  But I just cut off the soles.  That's not what he had in mind, but it was good for a laugh, and he actually wore these to bed here.  It is terribly humid here in monsoon season (right now), so I hope he was nice and comfy in all that overnight (he's got a t-shirt on under the pjs). 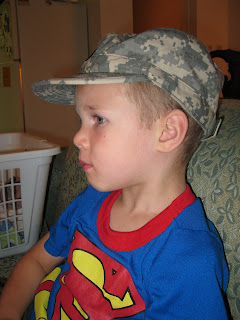 Here he is wearing Dean's patrol cap and is mesmerized by a game.  Ugh. 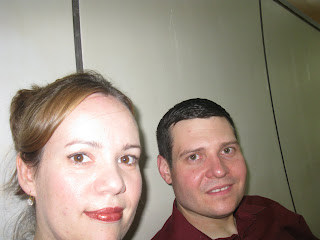 Saturday night we managed to get a babysitter and go out on the town.  We went to a different part of town, so rode the subway. 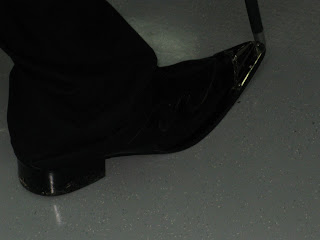 A pimp-looking dude (not Korean, not white - take a wild guess) was wearing these beauties on the subway.  Dates are always magical, and we've decided we just need to buckle down and do them regularly.  We've just been too cheap in the past to pay for sitters very often. We had yummy food, and I had my first melon bar, I think from a 7-11 here, which are on nearly every corner.  They are fabulous, kind of a honey dew/banana ice cream on a stick.  I also kept buying junk food that people were selling on the streets, such as a potato sliced in a continuous peel and skewered and fried, and some kind of caramelized corn stuff.  Both were good.
Sunday we both gave talks in church, on temptation.  I was set apart as District (kind of like Stake) Primary 1st Counselor.  Dean is the Elder's Quorum Secretary. 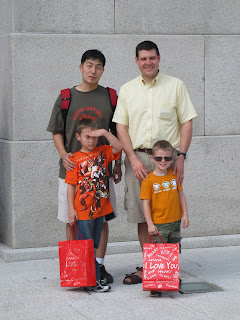 Today was Hunter's first day of third grade.  His teacher happens to be in our ward, and is the lady who, with her husband, took Dean to church a couple of times and had him over for dinner and for Independence Day activities before the rest of us got here.  She's married to a lieutenant colonel, and they have five grown children, though she's still on the young side for all that.  Hunter had a good first day as far as we can tell, and she will surely be a wonderful teacher. 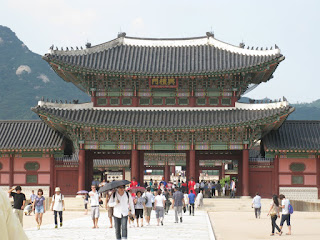 So, Captain Cho, who Dean is "mentoring", wanted to take us out sight seeing since they have a four-day weekend for the start of school, so today and tomorrow off.  He took us to the Gyeongbokgung Palace, which was fantastic. 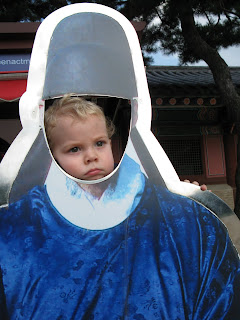 Some Koreans were snapping pictures of Trist-man here.  This lady below was our English-speaking tour guide.  She is wearing a Hanbok, a beautiful, traditional Korean dress.  Patti's aunties wore them a year ago at Patti and Dustin's wedding, and I thought they were fabulous.  I intend to have one by the time we leave here. 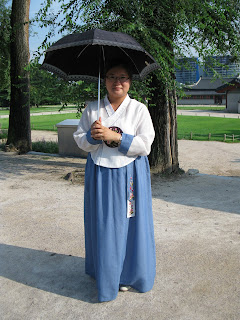 This white dude is apparently doing the monk thing. 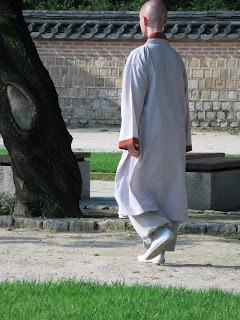 The architecture is fabulous, and there is so much to see at the palace. 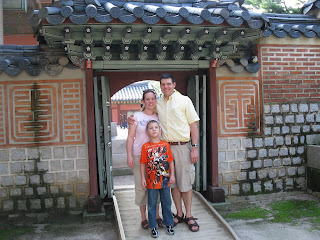 Hunter is over four feet tall now, and over 60 pounds.  No wonder he eats so much. 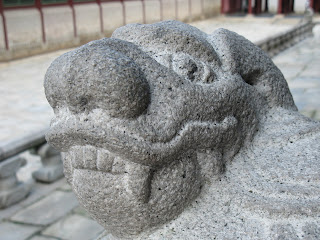 There are all sorts of these gargoyle kinds of guys.  And I loved the live guards. 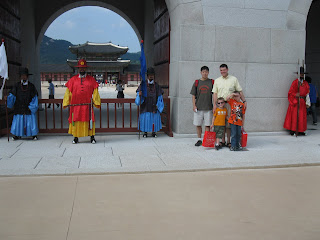 We were pretty hungry, so we found a place to eat after visiting the palace.  Captain Cho wondered if we wanted some live octopus, but we're just not ready for that yet.  We ordered Mandu (sounds like fondue) for the boys, and they ate it up yum.  I had a chicken and rice noodle soup, which was good.  Dean had an acorn jelly dish, which was surprisingly good.  And of course there was Kimchi.  Tristan was good and hungry, and ate some of all that, and didn't mind unless it was spicy.  His hematoma is fully healed now, woo hoo! 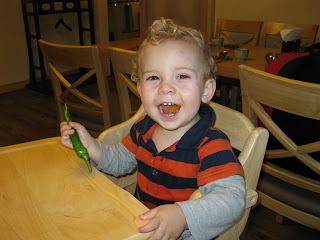 After dinner we walked a bit, and saw this guy, who was behind the development of Hangul, the Korean alphabet. 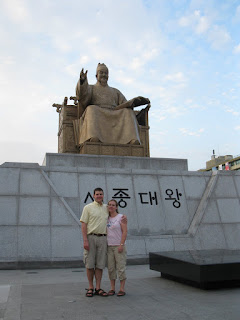 I spotted this couple while we were walking.  They are wearing matching Hanboks.  They must have been at an event, I'm guessing, because no one just wears it around, unless they are working in a traditional restaurant or as docents or something. 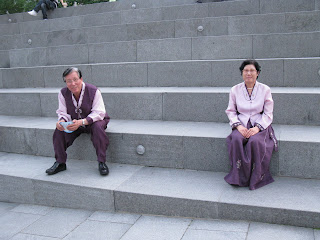 I thought this mask was fun. 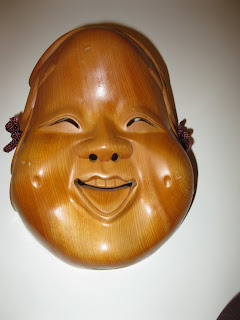 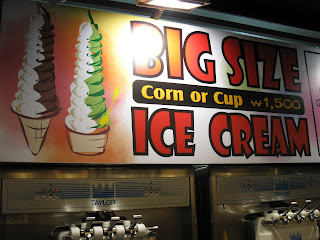 Posted by Living Lavallee at 10:52 PM

Fun post. It's great to see that you're getting out and having some fun adventures.

Wowo you have been busy! You guys are making a lot of fun memories that I know you will not regret! I would take pictures or Tristan too because he is such a cutie!

Great post! Glad you're taking advantage of the opportunity to learn more about such a fascinating culture and having a great time doing it. Great memory makers. Glad Tristin's bleed has stopped. He sure is a cutie as well as your other boys!

I love following along with your adventures; they are so amazing!

I'm glad that Trystan is healed up, and that you got a date night!

Exciting adventures. How was Kyler's birthday?

I lived in a hall way with koreans that made kimchi and it stunk horribly. I can't imagine eating and liking it. Good for you. Just thinking about foreign asian food makes me squirm. Glad you are liking some of it. Tristan is getting so big and cute. No wonder the people can't keep their hands off him:)

Becky!!!
I served a mission with your husband in Brazil - I am Brazilian ;o). Our family has lived in South Korea and we totally LOVE the country!! You are so lucky to be there! There is so much to see and do! The food is delicious and kimchi...Yummy!!!! And Korean people are sooo nice! The looove children and will take lots of pictures with your kids ;)
I hope I can go back and live there again!
Lucky you!!