Dean had a four-day weekend to use from Aug 1-4, which was right over our birthdays on the 3rd and 4th. We don't often plan ahead of time, but were thinking we'd go on a little vacation. But he didn't put in to be able to travel more than 250 miles, (Army rules) so we were a little limited. But, we decided, who wants to travel so far with small children anyway, and we started looking closer. Ultimately we settled on doing a "stay-cation", where we just did day trips or saw things locally. That way we got to stay in our own beds at night and didn't have to pack much.

So Saturday we drove up to New Bern (about 40 miles from here) and saw the Tryon Palace. Mr. Tryon was the first governor of the state back in the revolutionary days. It was interesting, and we even saw a mock wedding of some of his "staff". It was performed by the blacksmith, in front of an anvil. 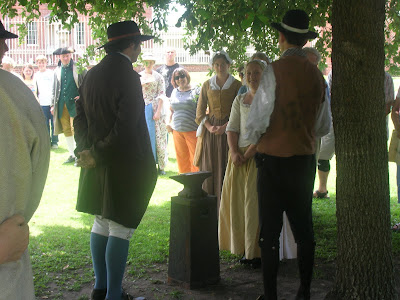 I wore Tristan in a Bjorn, and Dean managed the other boys. 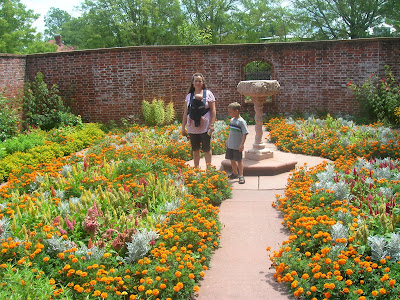 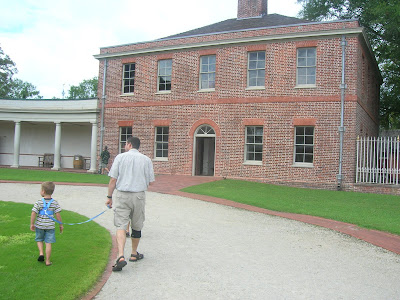 It actually hurt Dean's knee more to be in the car than to walk around, so we made a good decision in not traveling far. Sunday we went to church as normal, and had some friends over. Monday all we could come up with was going to pick blueberries for the last time. It's not too much fun in all the heat and humidity, but we managed five pounds to beef up our freezer supply here at the end of the season. We went to dinner as a family and had Thai food.
Tuesday we went to Wilmington, which is over an hour away, to go to a water park - a first for the boys. Dean took each of them for a ride in a go cart as well. It was all a hit, except that of course I ended up sitting around most of the time holding Tristan and keeping him out of the sun. Kinda boring. But, things got exciting mid afternoon when I started to get sick. By the time we were driving home after some errands at 8pm, I just wanted to die. I had developed a terrible stomach flu, complete with the worst chills and headache I've ever had, plus body aches, stomach cramps nearly as bad a labor pains and general horribleness (not to mention the stomach issues). I hoped it would only be a 24 hour bug, and first assumed it was food-borne illness (maybe the Thai food?), but no one else was sick and everyone had sampled mine.
By Thursday I was down about 8 pounds and absolutely miserable. I had had Dean hook up the TV so the boys would be kept busy (they normally only get to watch when their bedroom is clean, which is almost never). I've been able to nurse Tristan, somehow, which is a blessing. I finally called the nurse advice line, and the nurse asked if I was dizzy upon standing, which I was a little, so she said to go to the ER. Dean had to come home and load us all up so we could go sit around a few hours there. They decided it was just a bug that had to run its course, but gave me two shots, one for the headache, and I can't remember what the other was for, and some anti nausea meds. I had been taking tylenol and advil alternately to keep the chills and aches at bay. By Friday evening I was perking up a bit, but still not well enough to be up and about. Dean has been a champ and has been doing the dishes and providing meals (mostly fast food or take out).
So, as of today/Saturday, I'm down about 9 pounds. The only silver lining of all this would be that this would stay off, as my post-baby weight loss has plateaued already. I tried on some jeans today that I wasn't able to wear a few days ago, and got them on. Wow. I really don't recommend the diet, though!!!
Posted by Living Lavallee at 4:31 AM

I'm so sorry to hear about your sickness. Dean metioned that you were sick, but I didn't think that it was this bad. Sorry that I was in Raliegh or I would have brought you dinner or taken the kids for awhile. Let me know if you need anything. Maybe I should try this diet. Do you still think you have the bug to give me? ha ha

Actually, Dean's got it now, so maybe he could share... Poor guy -but he knows what to expect at least.

As much as I need to lose the baby weight I really don't envy the stomach bug, I'm sorry you all are suffering or have. I hope it's not Swine Flu...there's been a breakout of it at the hospital. Hang in there! Next time call so we can bring a meal or something....on a positive note, I'm glad you got a few moments of quality/healthy family moments together.

Hmmmm. I think it might be worth it. Why don't you send it my way?

That reminds me of when I got a kidney infection a couple of months ago and I lost 8 lbs. I have kept it off so I TOTALLY know how you feel. It is good some weight is off but it is not the ideal way!