I've been blogging so little that I almost couldn't figure out how to log in and start a new post today.  So I'll give a top five of our lives for the past few months.

1. Tristan has been talking a lot about rooster eggs of late.  And dinosaur eggs.  And dinosaurs.  We're not sure if said eggs are laid by roosters, or if they contain roosters.  I couldn't convince him that dinosaurs are all dead, so we keep an eye out for them together.  He often asks who would win in a battle between a dinosaur and a "NOR-oss" (rhino or horned dinosaur).


2. Something has possessed my soul and I am actually considering homeschooling.  Probably just Hunter, as he would be starting sixth grade in junior high this year and that concerns me, along with a lot of other things about school.  I can't seem to get it off my mind, and he isn't adverse to the idea.  I poll him occasionally about it, and his only negatives are that he would miss the variety available at lunch, and field trips.  I think they've been on two so far this year.  And he would miss being able to jump over his peers.  He did that once apparently and thought it was a load of fun.  He has plenty of people to jump over at home.
3.  Dean's folks have moved up here fairly close to us and we are all thrilled.  We enjoy having Sunday dinners together and the kids love going on outings with them and sleeping over - even Miss Cambria.  They commandeered the whole tribe on a recent weekend so that Dean and I could take a delightful jaunt to Orcas Island, part of the San Juan Islands.  This was a vacation, as we all know that "family trips" are anything but. 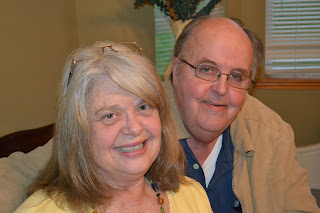 4.  Dean actually started seeing a Naturopathic Doctor, after being told by an MD that he needed to go on a 2 grams-of-fat/day diet, and start taking statins and other dangerous drugs.  After doing some testing and an elimination diet with the ND, it turns out Dean's lifelong, horrific nasal allergies and inflammation are massively compounded by eating wheat.  She explained that the nasal allergy to certain grasses (he's not allergic to all grasses) combined with eating wheat (a grass) has an additive effect on afflicted people, which led to his sinuses being so inflamed for so many years that he had them carved out several years ago where they used to be around his nose, since they had long since filled in from all the inflammation.  So, he has gone wheat free.  He can feel when he has some wheat, as he realized at Costco recently when he accepted a sample and felt ill almost instantly, or when he has regular oats, or buckwheat that is processed on equipment that also processes wheat.  Without the wheat in his diet he isn't using his allergy meds as much and is feeling vastly better in that way, though still flushes his nose out daily.  Spelt appears to be okay.  So he's not gluten intolerant, but wheat intolerant.  We are going to try Einkorn wheat soon.

5.  We would love to buy or build a house and actually feel settled for the first time in, oh, six years.  We should be here in the area for some time because of the business, but because of the business, and Dean being "self employed", we can't get a loan until he's been at it for two years.  Ugh!  We actually got "pre-approved" for a loan and found a house that we wanted to buy, and were under contract for 7 weeks for it, only to be told that the two year rule still stands.  So here we stay for now.


Posted by Living Lavallee at 4:00 AM

Love the update Becky. I'm so glad that you guys are liking where you're living so much, and finally feel settled. I'm jealous in so many ways;) Homeschooling Cora hasn't been nearly as scary as I imagined it would be, and I've almost committed myself to homeschooling all 4 kids next year....almost;) Good luck.