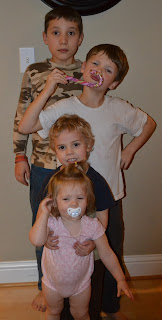 I had to copy dear Haylee in lining up the kids for a picture, hopefully to be an annual occurence.  Note the suckling and ear holding which has been present with all the kids in one form or another (Hunter sucked a bottle and held an ear until age three - so cute; Kyler sucked his thumb until recently - he may or may not still do it in his sleep; and Tristan loved bottles and ear nuzzles as well). 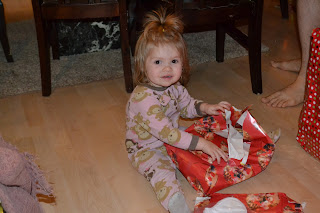 Cambria enjoyed opening presents as much as anyone.  Hunter and Kyler had to wait a few hours to open theirs, as they Santa came.  The highlight was a guinea pig that Kyler has been wanting.  He's taking good care of it so far.  Hunter got a special visit in the night.  He rarely wears pjs to bed - for no good reason, so he is a wide open target for antics from Santa.  Kyler is a beginning reader.  He was the first to wake in the morning; we could hear him running up and down the stairs, then going to get Hunter. I really laughed when I heard him say "There's something on your back; it says 'Santa was here'." Hunter quickly dressed and wouldn't ever let me see the graffiti.  He got plenty of pjs for Christmas, and then later used some of his Christmas money from Grandma D and Bro for footed pjs, which he has been wanting. 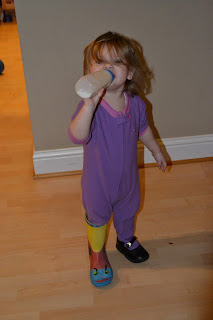 Lady Cambria loves shoes of all kinds as well as bottles, and hates having her hair done.  Dean calls it "crazy lady hair". 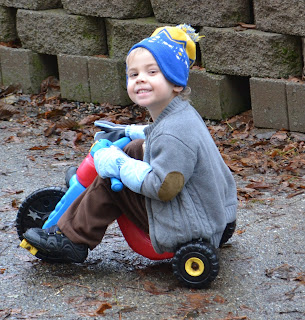 Tristan loves to play.  The hat is a little small at this point (from last year), but the new mittens will fit for a few years.  His theme for the year was Thomas the Train, as he got a lot of such gifts.  Hunter and Kyler had to wait a few hours to open their presents.  Poor cooperation in the days leading up to Christmas kept pushing the time back, so Hunter got to at 11, and Kyler at noon.  It actually made the (commercial) Christmas Magic last much longer, which was really nice. 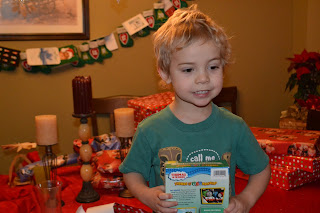 We loved having Bro and Patti with us on Christmas Eve.  We sure love living close enough to them to be able to do that, and someday we'll actually make the three hour drive to them :)  Then on Christmas Day my cousin Bethaney came from Portland, and Josh and Jessica joined us for dinner.

On New Years Eve we let the boys stay up and had fun with them.  At midnight they set off what was left of our July 4 fireworks, as did the neighbors behind us.  Then we all had some sparkling cider and went to bed.  It was fun.

With all the frivolity of the holidays, as well as the Albuquerque food tour from the summer, I put on about 15 pounds since returning from Korea, which was just killing me, especially since I had just lost a few pounds before me moved back here!  I mentioned to Dean some time ago that I wanted to do the HCG diet, and he said he'd do it as well.  So we went to a naturopathic doctor here in town and paid a lot of money... and finally started the diet after the new year.  Ugh!  The idea is that injecting the HCG will burn the "abnormal" fat off, while eliminating hunger since all those calories from fat stores will be circulating and providing energy/nutrition.  Well, after the two loading/gorging days, we've only been allowed 500 very specific calories per day.  I am down about 8 pounds in two weeks, but had hoped for better results.  Because of the nature of how it works, I'm wondering if having used chapstick or shampoo could be the reason it isn't working better, which is super annoying.  Or perhaps it was the tiny bite of potato or egg or chicken I've had of the kids' meals in the last two weeks.  Those small indiscretions could literally be the reason I haven't lost a lot more, which sucks!  To go through this and not lose that much because of such small "cheats" is most upsetting - as it feels like we're starving!  We are using a digital food scale and everything to carefully weigh our food down to the tenth of an ounce.  I haven't had any sweets or treats or anything at all, except a stick of gum once.  That could have stalled my weight loss as well!

Dean is sure he could have lost as much without having to starve, or more so, and has in the past for Army Physical Fitness Tests.  Dean looks great, as the "abnormal" deposits on his tummy are gone.  But I have a long way to go, and he was literally starving.  His metabolism was shutting down - he went from Mr. So Hot I Like To Run The A/C In Winter to being as cold as I am all the time, and not being able to think straight at work, which is not a good thing.  The ND said he could either stop it, or up his dose of the HCG and eat an extra 100 protein calories a day.  He was really only going through the torture to support me, so he upped his dose/protein and finally called it quits today, after two weeks.  I know that most people have great success on it, but if I/we had known what it would be like, I/we probably wouldn't have done it.  We were certainly hungry the first week.  It was like Fast Sunday every day, only without ever getting to be satiated.  It has made me think a lot about food storage and how I really don't want to be hungry if/when we need to use it.  Not to mention all the people who do not ever have enough to eat.

I'll stick it out and finish the product we have - we paid all that money after all - I'm embarrassed to say how much.  It's gotten much better for me, though I still get quite hungry come feeding time.  It's surprising how hungry I'm NOT in the evenings, after dinner, though.  Supposedly it will reset my metabolism and take away all the bad cravings.  Let's hope!  I feel like such a failure, since I have a degree in nutrition/dietetics, after all.  My problems are bad genes, my lifelong hormone imbalances, plus all the little/big things like portion control, too many desserts, and too little activity/exercise.  I do avoid a lot of things like drinking calories - I really only drink water on a regular basis..., and now I only use coconut oil in cooking and avoid gluten generally.  As a teenager I of course thought I was fat, and did watch what I ate much better than I do now.  Now 50-60 pounds later, I am still shocked when I see pictures of myself, or an unexpected sideways view in the mirror.  I really haven't been watching it since having baby #2, and have kept around several reminder pounds from each of the last three babies. We'll see how the rest of it goes.
Posted by Living Lavallee at 4:33 PM