We're down to a month before Darling Husband returns.  He turned in a 10 page battle analysis this week as part of his coursework.  We worked on proof reading it together via skype.  He chose the ancient battle of Cannae between the Romans and the Carthiginian General Hannibal.  Interesting stuff, and apparently the military still applies principles learned from it today.  Hannibal was the victor with his barbarian army.  He has had to sit through a lot of boring days this week listening to people yak for hours at a time.  He says he'd go insane without his iphone to play games on.  He actually got a bit of a reprimand the other day from one of the instructors, another captain, who asked if his games were more important than what the retired general who was then speaking had to say.  Dean said "yes".  Oh, my.  I asked how he ever got through college.  Apparently it was by sitting in the back and listening to Rush Limbaugh on his headphones.  He graduated with honors in biochemistry (I couldn't have begun to do that), so I guess he managed just fine.
Kyler has sure been flourishing in preschool, and now Taekwondo.  Every day he asks if he's going to school, then is excited if he is because he has Taekwondo right afterward, and loves it.  The other day I was late dropping him off for preschool and his teacher said his little table mates were waiting for him before they would begin their "work".  He has a gift for standing out and making friends where ever he goes.  He puts his Taekwondo uniform away every day in the same place, and doesn't have to be told to put it on or reminded of anything, then runs out the door to go to his class (very close to us in our housing village). 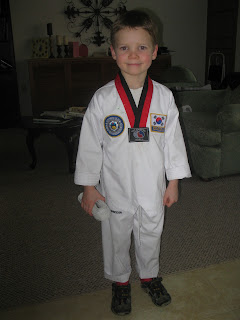 That is such a stark contrast with Hunter, who is incapable, apparently, of putting anything away, or keeping track of anything, such as his cubscout uniform.  They are supposed to wear the uniform every week to scouts, which is right after school one day.  It boggles my mind how out-of-it he is.  It would most likely be a chore for me to have him in Taekwondo or anything else, because I would have to remind him, and help him find his uniform, and go through the colossal struggle of getting him out the door every time (which was the case when I did have him in a dance class at Camp Lejeune).  Once a day for school that whole ordeal is enough for me.  We've been telling him for years that if he would stop one bad habit (namely eating snot all day) we would LOVE to put him in whatever he wanted.  It hasn't worked at all.  Now I know for a fact that it has caught up with him, finally, at school.  I went to his class Valentine party the other day and some of the girls clearly shunned him and acted like he had given them the plague when he delivered his valentines to them.  I sure felt sorry for him, but it's up to him to stop his bad habit.  If anyone has a cure, PLEASE let me know.

Dean really wants me to get Hunter into something extracurricular, and the Taekwondo is so convenient (at least for Kyler) that I want to, so I've finally said that if he could get his act together for one week, I'd put him in it.  It's been a month since Kyler started.  I hoped that would be a motivator for Hunter, but not so much.  He'd only have to get his homework done and signed off daily (a class requirement, which he rarely does), and keep up with his chores, and put his shoes on the shelf next to the front door - for a week.  That's all I ask, but there's no sign yet of any of it happening any time soon.  His teacher at school has said he has the classic absent-minded professor syndrome.  Her own son was apparently the same way, and was actually tested for special ed at school.  Then they figured out that he was gifted, and completely absent minded - just like Hunter.  Hunter is finally in the gifted program, so goes most of the day, one day per week.  He really enjoys it so far.

For Valentine's Day I made pink pancakes for breakfast, following in my mom's footsteps of using beets for the color.  I could hardly tell a difference in taste, but Hunter threw his up.  So much for that.  For the first time I gave them presents for the occasion as well.  Kyler got a package of Spiderman socks and I gave Hunter a new wallet, since he's lost every wallet (money included) he's ever had.  We'll see how long this one lasts.  Their grandma sent them each $20 for the holiday as well, so he took his to school and bought several books at the book fair.  He loves books!  Kyler has been a spend thrift of late, and wants to buy everything in sight whenever we go to the store.  I've stopped allowing him to buy candy, since he's not consistent in brushing his teeth, but I do allow him to buy sugarless gum.  He also wanted to buy some new underwear the other day - I forget who was on it, but Hunter wasted no time in wearing them since, of course, he can't ever find his own. 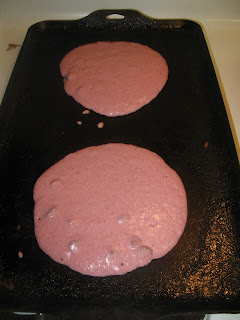 Tristan is as cute and adorable as ever.  He is learning to say a few words, and understands what we say pretty well.  His only fault is that he is stingy with his kisses.  If I ever ask for a kiss he'll shake his head and turn away.  Only a couple of times has he given me one.  He doesn't mind receiving kisses, though.  He spends the day racing around the house seeing how much he can pillage and pull out of the cupboards and dishwasher, etc...  Oh, the joy!  This would be about five pounds of buckwheat flour. 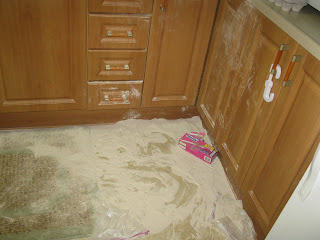 I am growing by leaps and bounds, and have started having braxton hicks contractions.  I am often light headed because I can't seem to drink enough, which probably explains the contractions.  I haven't been able to help myself and have been buying little girlie clothes and things as I see them on sale (75% off at the PX) or that other people are selling.  Dean's only comment was "and so it begins..."

I was released from the nursery a few weeks ago (yay!!!), only to be called to be the first counselor in the primary.  I am already the only counselor in the district (stake) primary.  Ugh.  But it's been fine so far, just takes some juggling, and I'm able to apply lessons learned between the two callings.  I made my first district primary visit to the Osan Branch last week.  That was nerve wracking - driving somewhere out of Seoul without Dean especially, and dragging the kids along, not to mention that I hardly feel qualified.  But it went remarkably well, which is encouraging.
Posted by Living Lavallee at 5:10 PM

We always seem to have so much in common. Amelia's first grade teacher said she'd really like to see her quit picking her nose and learn how to make friends. She can't keep track of things. She lives in la-la land. She's a ultra picky eater and doesn't like me putting beets in things. I used beets to turn a smoothie red tonight though and she didn't notice. Josh throws up if I make something yucky. And Dustin dumped malt-o-meal, not buckwheat all over the floor. My buckwheat flour is safe for now.

Always good to be kept up-to-date on your goings on.

Love lOvE LOVE the update! You are SO qualified for any job! You are wise and wonderful and full of humility and charity. A good recipe for magnifying any calling.
Those boys are in desperate need of a sister. When they have two moms maybe some bad habits will disappear. You look darling. I love your bangs. They are darling on you.
Love you all lots and miss you tons!